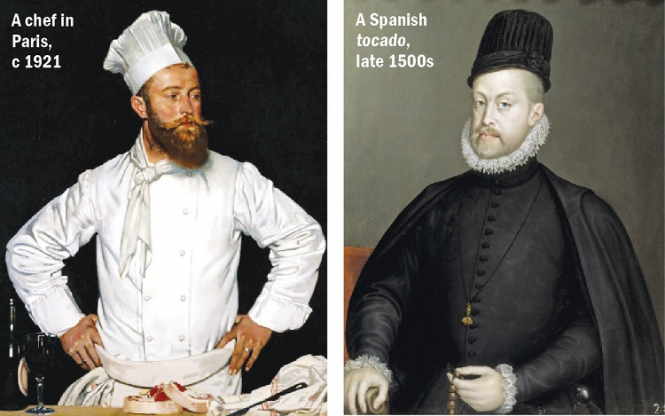 Should you be a newly trained chef eagerly carrying out an internet image search to source your very first proper toque – the name given to the high-rise, white hat so instantly associated with the professional cook’s métier – you may at first be met with a dazzling array of woolly ski hats donned by outdoorsy youths.

The reason for this is that the word toque is today used by Canadians to describe a beanie or knitted winter hat.

The word toque in this case is derived from the French-Canadian word tuque which in turn has Spanish (toca) and Arabic (taqa) predecessors.

Once you do find your white chef’s hat, you are buying into a long, riveting historical trail with, as ever in such matters, disputed origins.

Some historians say that similarly tall, brimless hats were donned by chefs in royal households back in 7th century BC Assyria; others claim a Byzantine debut, when intellectuals sought refuge from Barbarians at Greek Orthodox monasteries – where they wore stovepipe hats like the monks – and became cooks.

Fast-forward to the French connection, and it is in the 18th century that the toque blanche became popular thanks to Boucher, the maître d’ of politican and diplomat, Talleyrand (1754-1838).

It was he that employed the original celebrity chef and grande cuisine innovator, Marie-Antoine Carême (1784–1833) who, in turn, insisted on staff wearing white hats for hygiene reasons.

As for the height of the hat, a length of cardboard stuffed inside indicated a head chef’s experience and standing – the taller the hat, the more important they were in the kitchen.

The pleats, meanwhile, soon came to indicate the number of recipes a chef knew – for instance, 100 pleats would indicate a chef had an impressive 100 egg recettes up his sleeve.

Which all begs the question: does multi- Michelin-starred Alain Ducasse secretly balance on his head, behind closed doors, a vertiginous, three-metre tall toque boasting a thousand pleats?

Get set for salad days with stylish La Redoute saladiers

With the Nouvel An comes the inevitable crisis of conscience, resolutions to uphold and promises of healthier eating. Which makes this the perfect time to plan ahead for those salad days of lighter summer eating by investing in some chic new saladiers (salad bowls).

We love this matching set of leaf motif, French-made Pyrex bowls from La Redoute, which come with covers, making them ideal for storage as well as presenting à table.

The Weiss chocolaterie in Saint-Etienne was founded in 1882, which makes it one of the oldest in France.

They move with the times though, as exemplified by two new organic and Fairtrade Ceiba chocolate bars (€5.10 for 100g) – newly available in white and milk chocolate, and made using cocoa beans from the Dominican Republic.

Another great gift idea for Valentine’s or Mother’s Day is their Pochon Coeur, with three types of chocolates, €15.90 for 200g.