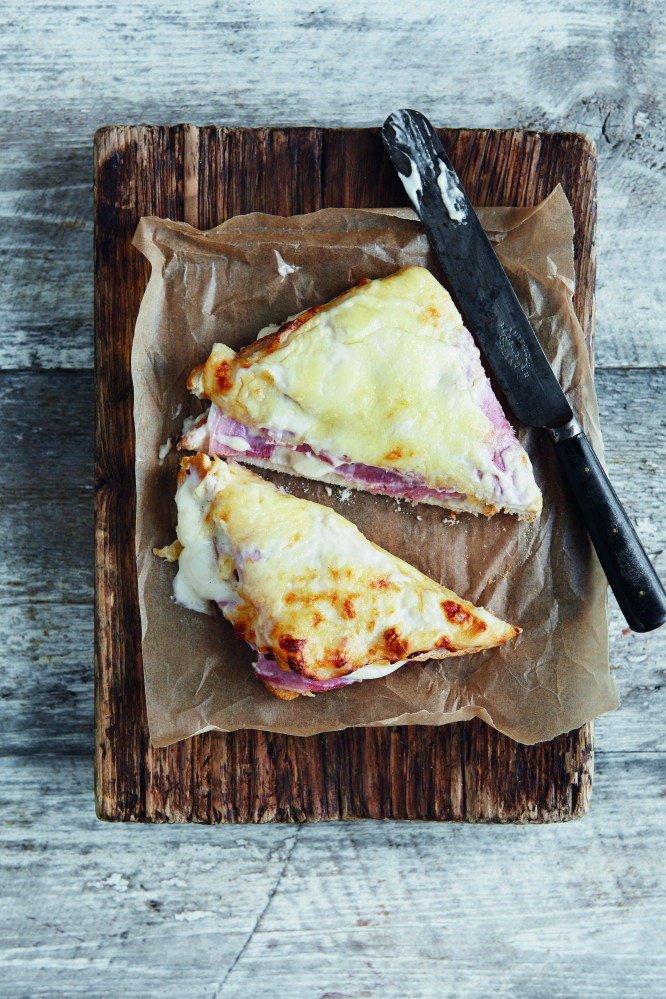 The numerous journeys I made through France while I was writing my last book, The Essence of French Cooking, rekindled many childhood memories for me, including, among others, my discovery and love of cheese… so much so, in fact, that I decided to devote my next book to the subject.

From the age of seven, my mother entrusted me with the task of buying a few items from the local market of St Mandé every Thursday. I would set off around midday to arrive when the stallholders were reducing their prices, preferring to sell their wares for less rather than having to pack everything up again. After buying fruit and vegetables, and some meat or fish, I was drawn like a magnet towards the cheese stall. The pleasure for me, as a kid, was an awakening of all my senses.

Every market day was invariably a voyage of discovery for me, because new cheeses appeared on the stall in different shapes, sizes and colours with the changing season, only to disappear again after a few months… I used to think that they wanted to play hide-and-seek with me. The woman on the stall would always spoil me. I think she loved seeing my face light up in front of the display of cheeses, my eyes devouring them all. She would give me little morsels to try, especially the fresh cheeses or any that were relatively mild on the palate while still being flavourful. Through her gentle handling, she succeeded in developing my palate.

Our finances didn’t allow us to spend a fortune on cheese, and my mother’s instructions were strict: I must use the few precious coins deep in my pocket to get maximum value for money. I would often pick Cantal, a cheese known at the time as ‘poor man’s cheese’, since it was the least expensive, yet nourishing, or a piece of Gruyère that, according to my mother, was vital for bone growth.

Sometimes I’d choose a Camembert or half a Coulommiers, first checking it was perfectly ripe to the centre by pressing it with my thumb. A piece of Roquefort, the king of cheeses, was a real treat. It was expensive, so I would buy just a tiny piece – around 50g – to spread over a whole baguette to pass around the table and share on a Sunday.

So there you have it that is how I discovered my love of cheese. Since then, of course, I have come across hundreds of types of cheese on my extensive travels around the world.

Putting together a cheeseboard

First of all you need to take into account the season, particularly when it comes to your selection of fresh cheeses. The flavour and texture of a cheese is largely determined by the milk, the quality of which is affected by the food the animal is eating at
the time.

During the summer, cows, sheep and goats feed on pastures, which are generally lush at the start of the season, whereas their feed is largely hay during the winter months.

Not surprisingly, fresh cheeses made in late spring and early summer tend to be more lively and interesting than those produced during the winter. This applies in particular to goat’s and sheep’s cheeses.

If possible, buy your cheese from a specialist cheese producer (in France a maître fromager) or cheese shop, or failing that from a supermarket or delicatessen that offers an extensive range of high-quality cheeses. A specialist cheese producer will have the advantage of an ageing cellar or cave (cave d’affinage) that can provide optimal conditions for the cheeses as they ripen.

They will also be able to offer you the chance to sample a few cheeses that have caught your eye, and may even supply you with little labels to identify each different variety on your cheeseboard.

If you are entertaining at home, your choice will be determined largely by the number of guests. For four people, my advice would be to serve just one generous wedge of perfectly ripe cheese such as Brie de Meaux or Stilton, or a lovely piece of Comté. I always like to serve an odd, rather than even, number of cheeses. For six to eight guests, I’d probably offer five cheeses. For ten to twelve guests I would suggest serving seven cheeses at most.

Select a variety of cheeses from each of the following categories:

- A fresh or white cheese, from the Loire valley, perhaps, where you can find a host of fresh goat’s cheeses between three and seven days old. This cheese will prepare your palate , much as in a wine tasting where you   would start with a local wine before moving onto a premier cru, then a grand cru.

- A soft fresh cheese, with a natural rind such as a Saint-Pierre, Brocciu or Banon de Provence.

- A soft cheese with a bloomy rind, such as Sharpham Brie or Camembert.

- A soft cheese with a washed rind, such as Stinking Bishop, Vacherin Mont d’Or or Taleggio.

- A flavoured cheese, such as Cornish Yarg or Edam.

To appreciate their flavour to the full, cheeses should be served at room temperature. So, if they are stored in the fridge, you will need to take them out an hour or so before serving.

A cheeseboard should look appealing and have a sumptuous selection of cheeses, presented attractively. The actual board could be a large piece of slate, a beautiful piece of wood or a marble slab. If you have a few vine leaves or chestnut leaves to hand, you could use these to line the surface decoratively.

On a separate dish, you could also offer a few little bunches of black or green grapes, some pears or apples, celery leaves, and a small dish of chutney.

You can equally serve some quince paste alongside, although it won’t necessarily go with every cheese,  or a little honey.

This is a delicious snack when made with plenty of finely sliced good-quality ham. We serve it at the bar in Le Miedzor, my Swiss alpine restaurant in Crans-Montana; it’s always very popular with a glass of local wine. For a light lunch or supper, serve it with a green salad.

pepper and a touch of cayenne

size as the bread

2. Repeat with the remaining ingredients to make six croque-monsieurs in total and place them on a baking tray. Sprinkle the grated cheese over the top of them and press lightly into the béchamel so that it sticks well. Cover the tray with cling film and refrigerate until ready to serve.

1. Melt the butter in a small, heavy-based saucepan over a low heat, then add the flour. Stir with a whisk and cook gently for 2–3 minutes.

2. Pour the cold milk on to the roux, whisking as you do so, and bring to the boil over a medium heat, whisking continuously. When the sauce comes to the boil, lower the heat and simmer gently for about 10 minutes, stirring frequently.

3. Season to taste with salt, white pepper and a little nutmeg if you wish, then pass the sauce through a fine chinois.

Round courgettes lend themselves perfectly to stuffing with a deeply savoury filling, as here. Beaufort is a semi-hard cow’s milk cheese, which is flavourful but not too strong.

1. Cut off the top 5mm of stem attached to each courgette, then slice off the top quarter, to create a lid. Set these lids aside.

2. Using a melon baller or teaspoon, scrape out the inside flesh from the courgettes, leaving about a 5mm layer of flesh attached to the skins. Chop the scooped-out flesh and set aside.

3. Heat 50ml of the olive oil in a pan over a medium heat, then add the shallots and sweat, stirring, for 3 minutes. Add the chopped courgette flesh, lemon juice and some salt and pepper, and cook gently over a medium heat for 15 minutes, stirring every few minutes. Remove from the heat and set aside to cool. Once cold, stir in your chosen herb.

5. Sprinkle the inside of each hollowed-out courgette with salt and pepper and spoon in the cooled filling, distributing the cubes of cheese evenly through the mixture as you go.

6. Stand the filled courgettes in a lightly oiled oven dish and brush all over with the remaining 50ml olive oil. Pour 50ml water into the dish around (not over) the courgettes, and bake for 40 minutes.

7. Remove from the oven and place a reserved lid on each courgette. Bake for a further 20 minutes, then sprinkle generously with the grated cheese. Return to the oven for 2–3 minutes until the cheese has melted and is cloaking the courgettes.

I adore this dish from the Ardèche, known as crique ardéchoise. The crispness of the potatoes is amazing, and the addition of Picodon cheese makes it all the more delectable. You can, if you wish, substitute another goat’s cheese that isn’t too strong-tasting, and is, above all, well ripened and soft, so that it spreads out in part over the potato as it melts.

1. Peel the potatoes, wash them in cold water and pat dry. Using a mandoline, cut the potatoes into julienne and place in a large bowl.

2. Leave for 5 minutes, then squeeze lightly with your hands to remove the water they will have released. Add the egg, garlic and parsley to the potatoes with a little salt and plenty of pepper, then mix it all together, using your hand or a wooden spoon.

3. Divide the oil and clarified butter between two 22–24cm non-stick frying pans and place over a medium-high heat until very hot.

4. Divide the potato mixture between the pans and spread it out evenly using a palette knife, pressing it down so the potato is compact against the base of the pan. Cook for 2–3 minutes until the base has taken on an appealing nut-brown colour, then turn over using a large palette knife and cook on the other side for 3–4 minutes.

5. Arrange 3 Picodon halves over one of the potato discs, spacing them evenly, then slide the other potato disc on top of this one. Using a palette knife, press the discs together so that they adhere lightly.

6. Arrange the remaining 3 cheese halves on top; these will, with the heat of the potato, melt and spread out over the top.

7. Slide the crique carefully from the pan onto a rustic board or plate, and serve straight away, cutting it into slices at the table, using a pizza cutter or large, sharp chef’s knife.

Cheese by Michel Roux is published by Quadrille, with photography by Lisa Linder.