Fruits of the indestructible olive tree 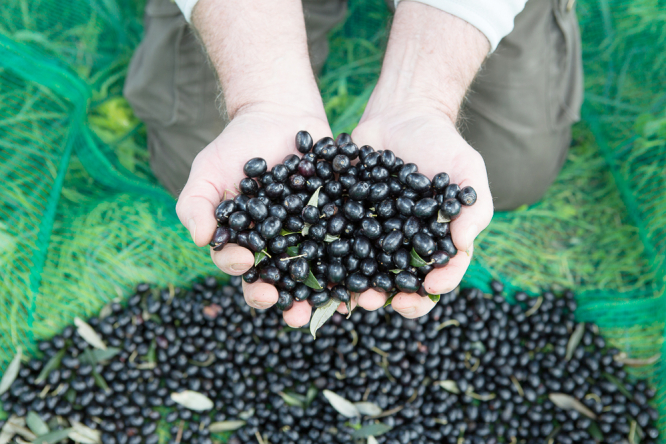 The very first olives in France are harvested in October, but the main period is from November to January, with some picked right up to May. The timing depends on the variety of tree, method of harvesting and the local climatic conditions.

It is very unlikely, however, that the olive oil you buy will come from France as the country produces just 0.16% of the world’s olive oil, and just 4% of the oil consumed in France. Most of it comes from Spain. Overall olive oil prices are going up and due to climatic problems 2016/2017 was disastrous with just 3,000 tonnes produced compared to 6,000 tonnes in 2015/2016.

It is thought this year’s harvest will be better. In France, concentration is mainly on oils of quality and 27% of oils have an AOP label. There are four regions: 66% is produced in PACA, 20% in Occitanie, 10% in Auvergne Rhône-Alpes and 4% in Corsica.

Though production is small in Corsica, it is an area where the production of olive oil is on the increase and where olive oil of a very high quality is being produced after years of abandon. Trees over a thousand years old are still producing fruit and new varieties, specific to the island have been developed by agricultural researchers and from 2017 have been planted for future crops.

Up until the 1980s the production of oil on the island had dwindled to almost zero from a flourishing commerce at the beginning of the twentieth century due to the two World Wars, the rural exodus and the economic depression. Now it has an AOP label, with 176 producers selling 127,000 litres a year at an average price of €20 a litre.

Daniel Cartayrade was one of the first Corsicans to see the potential of the island’s thousands of neglected olive trees: “The extraordinary virtue of the olive tree is that it hardly ever dies”, he says, “so with a little pruning and clearing away of the undergrowth the trees were still there to give us their olives. Some of the trees I look after are 700, 800 or even 1,000 years old.”

There are two ways of harvesting olives in Corsica, and bottles are labelled according to the method used; either Recolte sur l’arbre or Recolte à l’ancienne. Mr Cartayrade inherited his passion for olives from his grandmother and sticks to the old ways, and was one of only six producers to do so in 2017.

“In February, where I live at Zilia up in the mountains of the Balagna region in the North east, the olives start to ripen up. I put nets around the trees and let the olives fall naturally when they are ripe. Every evening I check the nets and nearly every day I have enough to take to the mill.”

Because all the olives are ripe when they are collected the resulting oil is soft and rounded with hints of the flavours of the surrounding aromatic plants which the fruit readily absorbs. The disadvantage is that it is labour intensive and as the tree is left to its natural life cycle it only produces fruit every two years.

“For me it is a positive decision to let the trees continue to live at their own rhythm”, says Mr Cartayrade. “I do not water them or add fertiliser, though I have to treat them against the olive fruit fly, but only when absolutely necessary. I think it gives a better oil, less bitter and more in line with tradition.”

From 60 trees, he produces between 1,500 and 2,000 litres, which sells quickly because of its quality, but he cannot make a living wage from it and has a daytime job.

From one oil to another

The President of the Syndicate for olive producers in Corsica is Sandrine Marfisi (pictured left). She originally worked in marketing for an international oil company but gave it up when she married a Corsican. For the past fifteen years her workplace has been in the most beautiful of sites imaginable, an olive grove by the Mediterranean, the silvery leaves of the trees reflecting against the deep blue of the sea beyond. She has older existing trees but has also planted new trees and grafted new plants on old trunks. She produces 3,000 litres a year from six hectares and her oil has won many prizes, including gold from the prestigious Paris International Agricultural Show.  She needs on average 5kg of olives to produce one litre of oil.

She harvests her olives using a hand held machine which both vibrates the branches and combs the fruit off into the nets below, so all the olives from one tree are collected at the same time. Though still extremely physical work, with seven hour days going from one tree to another, it is more economically viable than the older method, and the one used the most widely.

Because all the olives are harvested in one go, fertilisers are used and high producing varieties chosen, the tree will produce olives every year. Some pesticides are used against the olive fruit fly. Not all the olives are ripe when picked which means the resulting oil is sharper. As you taste it, the oil has a smooth flavour at the front of the mouth, with a spicy kick as it reaches the back of the palate. Olive producers say that there are at least as many tastes and types of oil as there are wines.

Mrs Marfisi has her own mill, which is unusual, but as she has a favourable position on the coast her olives are the first to ripen in October and the 28 AOP approved mills on the island are not yet in full production.

Old traditional mills with stone wheels have now been replaced by modern aluminium ones, which do the same job but reach European standards. “The olives are milled on the same day they are picked,” says Mrs Marfisi. “This is important as they quickly lose their health and taste benefits.

First they are washed and all the leaves, dust and twigs removed. They are ground into a pulp and then pass into a chamber with a bain-marie where the water is heated to a maximum allowed temperature for AOP olive oil of 27°C.  The pulp is churned in this chamber for 30 minutes. It then goes into a turbine where the oil is separated and siphoned off into tanks. Later on I will blend the oils to make up what will be that year’s oil, which is then filtered before bottling. Every year it will be different.”

She also explained that the term ‘cold pressed oil’ is no longer relevant as modern mills are so efficient that they can extract nearly all the oil from the olives in the first pressing. In the old mills the producers would reheat the pulp after the first extraction and then press it a second time to get higher yields, and the superior oil came from the first, cold pressing.

Keep oil away from direct light and heat. Close the bottle well after each use. Avoid changes in temperature. It is best to eat Extra Virgin oil within 18 months of bottling and Virgin Oil within 12 months. Corsican olive oil is best eaten uncooked on salads and as a dressing on fish or poultry dishes.