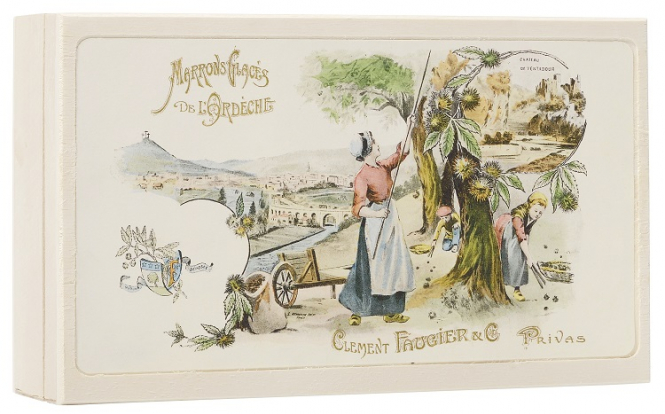 Marrons glacés are a French speciality, eaten at Christmas. The first ever manufacturer was Clément Faugier, at Privas in the Ardèche and the company has been making them since 1882. 95% of their production is sold in a fifteen day period at the beginning of December.

Jean-David Boiron, Managing Director of Clément Faugier says they are strongly linked with the festive season, firstly because chestnuts are in season during the winter, and secondly because it is a luxury food: “Marrons glacés are appreciated as a gift because they are expensive and this is because they are made by hand and involve several stages in their production, each one demanding a high level of skill and time.”

First, he explains why they are called a marron glacé and not a châtaigne glacée. “We have two different names for the fruit from the chestnut tree. If you have ever picked chestnuts you may have noticed that some casings contain two or three small chestnuts, which are often flat on one side, and some have just one, which is rounder and fatter.

“The latter are the ones we call marrons and which we use for our marrons glacés. There are fewer marrons than châtaignes and they are a better shape, though both taste the same. We use the châtaignes and any broken marrons for our Crème de Marrons.”

Marrons glacés were first appreciated at Versailles during the reign of Louis XIV and a recipe for them was included in a book about candied fruit, written by Pierre Gaultier de Varennes in 1667.

In the late 19th century the thriving silk worm industry in the Ardèche was hit by disease and one man, Clément Faugier, came up with a new way of making money which could use both the now unemployed skilled workers from the textile industry and abundant harvests from the local chestnut trees.  He developed a way to produce marrons glacés in quantity, and his methods are still used today.

The first of the many tricky tasks, once the nut is revealed from the prickly casing, is to remove its two skins. First incisions are made in each nut. Then they are either steamed or grilled at a very high temperature which explodes the outer skin and then the remains of the inner skin are removed with brushes. “Even then,” says Mr Boiron, “tiny bits of skin will be left and these have to be taken off, little by little by hand with a knife. It is a very time consuming procedure and there are no short cuts.”

They then have to be boiled in big vats of boiling water for between three and six hours. Another step which requires a remarkable amount of care. “The marrons are extremely fragile and so they are sewn, by hand, four at a time, into tiny cotton bags, which are then placed side by side, against each other so they do not move in stainless steel containers which are then put into the water.

“A confectioner needs years of experience to judge how long to cook the marrons, and length of time depends on the nature of each batch. Getting it right is essential to the success of the end product. This is because the principal of a marron glacé is to preserve it by exchanging its water content with sugar. If it is not cooked enough the sugar will not go to the heart of the fruit, if it is overcooked it will take on too much sugar.”

After boiling, the marrons are placed in vats of syrup, and the glucose levels are increased over a two to three day period until the process is finished. This is another stage when the confectioner needs to use all his experience to know when enough is enough.

“Every chestnut is different,” says Mr Boiron. “Their composition depends on many factors during their development on the tree, including the weather that year and their position on the tree. It is a natural product and so variable and that has to be taken into account during the process.”

Once “confit”, the marrons are left in buckets of syrup to mature “just like wine in oak barrels”, and then, finally they can be taken out of their little bags. Another time consuming procedure as they are quality controlled one by one and any broken pieces are rejected and used for other products.

They are then ready for the last procedure before being packaged. This is a final very thin coating of sugar which is set during a brief passage in an oven and which was invented in the 1950s to prevent stickiness when handling and to give them a glossy appearance.

However, Mr Boiron says they are very careful to avoid adding too much sugar: “Cheaper marrons glacés, which are often imported from Italy and Spain have a much higher ratio of sugar in them as sugar costs far less a kilo than chestnuts, but for me it makes them far too sweet.

“What I love about our marrons glacés are that each one is unique and I love to see them before the final sugar layer when their different textures and shapes make them look like a sculpture.”

Mr Boiron says it is increasingly difficult to get good quality marrons. He knows all about chestnuts as he comes from a family who has been in the business since 1807. His family worked closely together with the Faugier family from the very beginning and via the marriage of one of his aunts, the enterprise, still called Clément Faugier, is run by the Boiron family.

Whilst chestnuts were abundant in the 19th century, it is a different story now as chestnuts are yet another European species threatened by the introduction of pests from overseas. The Asian Chestnut Gall Wasp arrived in Italy 12 years ago and is now throughout Europe. There is no real antidote and Mr Boiron says they are having to learn to live with it.

The long procedure and increasing rarity of the marrons is reflected in their price – around €100 a kilo, compared to €60-70 a kilo for mass produced ones. You can buy them via the internet from Clément Faugier whole or broken and in wooden, paper or tin boxes.

You could pay just over €100 for a wooden box containing 84 individually wrapped whole chestnuts or 1kg of broken pieces in a plain paper box for €25 or just three perfect ones for €4,50. They keep for five weeks if kept in a cool place.

They are a luxury for Christmas that Mr Boiron continues to appreciate: “I like to cut them in half first to see their slightly shiny texture. They melt in the mouth, though each one is different and some are firmer than others and you can enjoy the subtle chestnut taste.”

The fruit itself is very good for you with plenty of vitamin C and fibres and no gluten. Marrons glacés are a friandise [sweet treat] to be eaten for pleasure, but not a guilty pleasure.