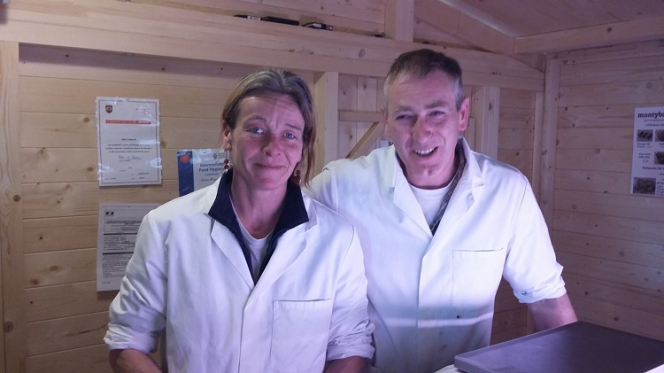 If you’re looking for haggis, you might want to head to Saint-Barbant in Haute-Vienne, where Julie Cameron and Andrew Montgomery run Montybutcher.

“It’s amazing how many people want real, authentic hand-made haggis, especially round Burns’ Night,” says Julie. “Even quite a lot of French people. People come from quite far away.”

They only use natural casings and top quality ingredients in their haggis, which costs €10.50 a kilo.

They make it to a traditional recipe, which customers then cook by wrapping it in tin foil in the oven, or by slicing it.

“We also make haggis, neeps and tatties pie,” says Julie. “And they are very popular.”

They only use meat (lamb, beef and pork) from their own 80 hectare farm (which they run themselves) and they hand make the rolls, and pastry for the pies.

“We sell British cuts of meat – pork with the crackling on, for example – and tender Aberdeen Angus beef.

We get so many people, probably 99% of our customers, telling us they’ve given up eating beef since they moved to France because they find it so tough, but ours is very tender.”

Their shop is open on Thursday, Friday and Saturday afternoons from 3-6pm, and they do deliveries on a Friday evening, posting the list of destinations on their Facebook page (www.facebook.com/Montybutcher.fr).

“We also go to Les Hérolles market every month on the 29th, except when it falls on a Sunday, in which case the market shifts to Monday. We get a lot of customers there, both French and English. You’d be amazed how many French people love our pies.”

They also make their own smoked and green bacon, and 10 different types of sausages, plus black pudding, white pudding, burgers, gammon joints.

“Sausages, bacon and pies are our best sellers, I think that’s what people miss from the UK.

Our sausages are different from French ones, and we do Lorne sausage too (a square shaped sausage that is cooked in slices).

“But before you ask, no we don’t sell by post. It’s too much trouble and we can’t guarantee quality. So if you want a haggis, you know where to come!”

Artisan cheese of the month: Bandon

Sometimes called Banon à la feuille (because of the sterilised chestnut tree leaves in which the cheese is wrapped – it is also bound with raffia), Banon is an unpasteurised cheese made from goat’s milk.

The small discs weighing around 100 grams are produced in the hills near Mont Ventoux in Alpes-de-Haute-Provence, followed by a quick dip in local eau-de-vie and a two-week raffinage (maturing) period.

A winter cheese best served with cherry or fig jam, it was originally used as a protein source through the colder months, and was given the AOC label in 2003.

Visitors can buy in situ: www.aoc-banon.com/fermiers.html

France’s Dom-Tom islands are serious rum producers and on Guadeloupe, rhum agricole is especially admired by drinkers for its purity.

Among the renowned makers is Damoiseau, established in the late 19th century and now the market leader.

Real aficionados should try their brut de fût (cask strength, 66.9%!) rum, made from a blend of cane juice and molasses, aged since 1995 and bottled in 2010.