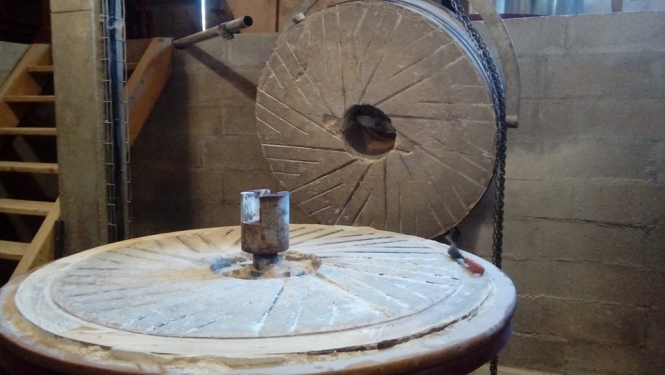 By using the millstone, the Moulin de Bobina gives flour with more nutritional value and fibre than modern drum mills
By Jane Hanks

A Dordogne farmer has fulfilled his dream of creating his own mill to grind the grain he grows in his fields.

Frédéric Pradeau, of St-Martin-de-Ribérac, built the Moulin de Bobina mill and says it is unique in France as it combines the best of traditional knowledge and methods and modern technology. It uses old millstones but runs on electricity from solar panels.

Mr Pradeau searched across France for parts from old mills and says key elements are more than 70 years old.

He told Connexion: “I am very proud of my mill. It took me five years to put it together, with help from experts. You have to be a little bit mechanically minded but, above all, passionate to do something like this.”

Mr Pradeau does not come from an agricultural family, but had dreamed of being a farmer since he was a boy.

He bought his 80-hectare farm 15 years ago and concentrated on cereals, experimenting with different varieties.

From the start, the farm was 100% organic and he grows wheat, buckwheat and spelt. For years he sold his wheat to a local miller but always wanted to be able to look after his product from field to flour.

Now he can do that. One of the most important factors for him was finding and using an authentic stone for the mill.

“Most mills nowadays use a cylinder mechanism, which is much harsher in its action than a millstone and loses most of the best elements of the grain. The advantage of stoneground flour is that it keeps its nutritional value and tastes better.

“There are more fibres and I also keep the wheat germ. This is the most important part of the wheat kernel and is the part which would sprout into a new plant if it was not ground into flour. It adds a great deal of flavour as well as vitamins, minerals and protein.”

Mr Pradeau is particularly proud of his millstones, which came from the La Ferté-sous-Jouarre quarry in Seine-et-Marne, which was famous worldwide for its millstones. They were produced there for at least five centuries up until 1950, when metal cylinder mills came into vogue.

Researchers believe at least a million millstones were exported from La Ferté across France and Europe, and as far as Australia and the US – with 5,130 to the US in 1901.

In the middle of the 19th century 4,000 people worked in the industry.

The siliceous limestone was perfect for grinding wheat. It was hard and ground the wheat without tainting it with stone powder.

Now, with the revival of organic farming these stones are being brought back into action, not only at Mr Pradeau’s mill but also in northern Italy and the US.

Mr Pradeau sees part of the satisfaction of grinding his own flour as knowing exactly what goes into it, and what does not: “I know that in my flour there are no additives and no pesticide residues.

“I think the quality of the flour used today is responsible for a lot of the problems we hear about people becoming gluten intolerant.”

Mr Pradeau says anyone with coeliac disease can never eat gluten but those with a gluten intolerance could try bread made with traditionally ground flour and traditional baking methods: “If the flour has been ground to keep all its nutritional elements, and if it is then allowed a long period in which to rise, that will break down the gluten and should be digestible.”

He grows old cereals such as spelt and buckwheat but says more modern strains produce better flour and claims they are perfectly healthy if treated with respect: “My most recent wheat strains are around 10 to 15 years old and they make good flour.

“The interest for me is to produce a genuine product which I can follow through each stage.”

The Moulin de Bobina began production eight months ago. It turns about once a week and produces a tonne in one day.

At present he only sells his flours in 25kg sacks to bakers but hopes to start selling to the general public later this year, starting off in a delicatessen in nearby Ribérac.