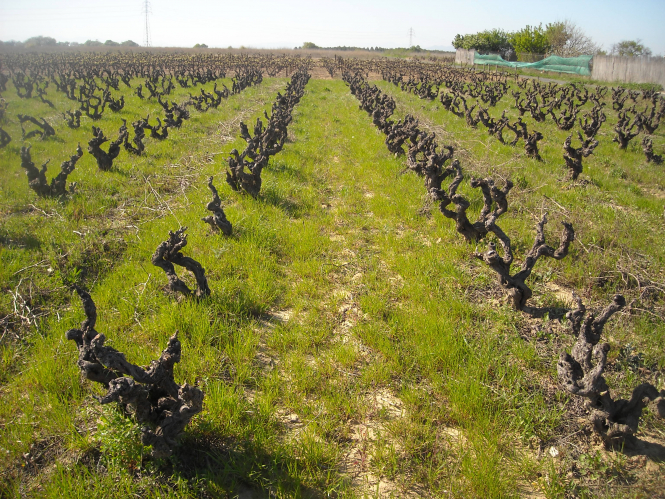 At the same time, weeds are growing rapidly and need to be controlled before it is too late.

As the rows cannot be ploughed if they are full of vine prunings and herbicide cannot be sprayed if it might get on the vine leaves, whichever method is chosen, it needs to be done quickly.

First of all, the prunings need to be removed. The two choices are mulching them into little pieces or collecting and burning them. Mulching has the advantage of putting back organic matter into the soil, provided they are small enough and are ploughed back into a healthy, living soil.

However, if the vines were infected by powdery or downy mildew during the previous year, the spores of those fungi will be hibernating on the prunings and may be spread back on to the new shoots by rain splashes and wind. Therefore some vignerons will gather up the prunings and burn them, spreading the ashes on the vineyard.

The method of weed control is a decision of the individual vigneron and comes down to environmental and economic choices. The cheapest and simplest method is to spray a herbicide such as Roundup (glyphosate) across the whole vineyard. This may be done several times a year.

However, it is not very good for the environment because if Roundup washes off into water systems, like streams and lakes, it can kill fish and other water-life. Also, a lack of vegetal matter will eventually kill the soil, forcing the vigneron to be dependent on chemical fertilisers to feed the vines.

Ploughing can keep down weeds but it’s more difficult to achieve. The vigneron needs to take account of the type of soil and the type of weeds, as well as the dampness of the soil. Also the plough only removes the weeds between the rows, not those under the vines.

Recently, “intercep” ploughs have been developed that can plough under the vines and automatically retract the plough feet when they detect a vine trunk. However, they are expensive, complicated to operate, and will not remove all the under-vine weeds. A common compromise method is to use herbicide on just 30cm under the vine and plough the rest of the “alley” between the rows.

Around the same time, the vigneron needs to address the fertilisation requirements of the vineyard.

Achieving a good balance between undernourishment and over-vigour is a complex problem. A balanced vineyard will produce reasonable quantities of good quality grapes. Under-vigour leads to uneconomic yields and over-vigour leads to poor quality fruit, mainly due to fungal diseases and uneven or under-ripeness. The vine does not need many nutrients compared to other crops. Most of its requirements it can get from the air (carbon and nitrogen) and the soil (base elements such as phosphorus, magnesium, copper and iron). However, it needs some added nitrogen and potassium.

Chemical or inorganic fertilisers are those created using chemical processes such as the Haber process from mined or recycled minerals. They generally contain high levels of nitrogen, phosphorus and potassium but little else and no organic matter.

Organic fertilisers, derived from composted animal manure or dead matter (bones, feathers) as well as vegetal compost, all have lower levels of nitrogen, phosphorus and potassium but a lot of organic matter and some base elements too.

The organic compounds need to be broken down in the soil and are therefore slow-release rather than the quick hit of chemical fertilisers. Organic matter also improves soil structure and encourages the growth of beneficial soil microbes.

The choice of chemical or organic fertiliser is the fundamental difference between organic and “conventional” farming.

So in March we see the vignerons making decisions that are going to affect the balance of their vineyards, hence the quality of the wine, as well as the impact on the environment.

. Jonathan Hesford studied oenology and viticulture in New Zealand and is the winemaker and owner of Domaine Treloar in the Roussillon.