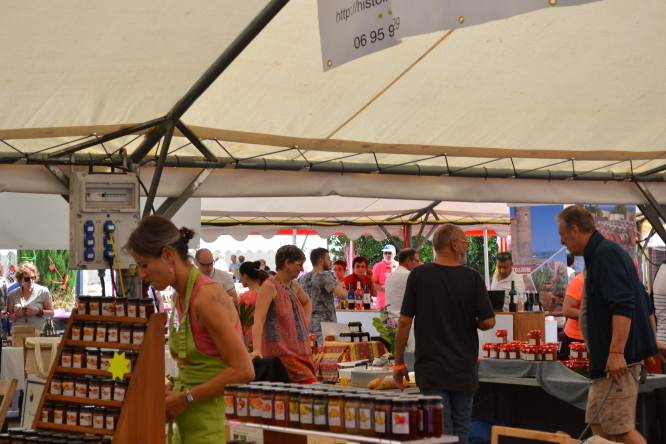 Visitors flock in their thousands to the annual event in Beaupuy, Lot-et-Garonne
By Jane Hanks

No traditional French breakfast is complete without a pot of jam to accompany either a croissant or slice of baguette. And as summer fruit ripens, shops start selling jars, cauldrons and five kilogramme bags of sugar so that the popular summer occupation of jam-making can begin.

The French love jam. A UK CBI study says that France is the leading country in terms of consumption in Europe.

A study by the French sugar industry’s information body CEDUS found that 70% of people in France buy jam seven times a year, and an average household consumes nearly four kilogrammes of the stuff every year - and those figures only refer to industrially made jam. It also reveals 60% of people make their own.

One of the first books on the subject was written by French physician Michel de Nostredame – or Nostradamus, who is better known these days for predicting the end of the world. One of his first books was devoted to jam.

Le traité des confitures was published in 1555. It includes a cherry jam in which, after a year, the cherries are ‘just like they were on the day they were prepared’, quince jelly ‘fit to set before a king’ and pear preserve ‘excellent enough to set before a prince’.

But jam did not become popular until the introduction of beet sugar in the 19th century. Cheaper than cane sugar, it became possible for people to make it themselves at home. France is now the world’s leading producer of beet sugar.

In the UK, French jam is associated with the gingham- lidded pots of Bonne Maman found in supermarkets. This is commercial jam and the company which makes it, Andros, is the number one French producer. It is made in what began as a family firm at Biars-sur-Cère in the Lot and is guarded about its manufacturing secrets, rarely letting journalists through its doors.

We do know that the famous design on the lids came from the co-founder Pierre Roche-Bayard who died earlier this year, aged 83. He decided to personalise the lid and the story goes that the design was inspired by curtains from his family farmhouse. He also wanted a simple label which he wrote in his own hand.

This definition is strictly adhered to for people who wish to enter into the Best Jam Maker, confiturier, in France. The 2017 competition will be held this month at the country’s biggest jam event, The Confituriades, at Beaupuy in the Lot-et-Garonne.

Up to 5,000 visitors come to taste different kinds of jam and they can also enter a competition for amateur makers.

This year, as well as the best professional jam maker in France competition, the 9th edition on August 19 and 20, will also host the World Champion Jam-Maker contest.

Organiser Christian Pezzutti expects entrants from several countries. “It is a very popular festival because everyone loves making and tasting jam. I love it. When you have your own garden and plenty of fruit what better than to turn it into jam that you have made yourself.”

Last year’s winner of the Cuillérée d’Or for Best French Jam Maker was Orianne Lauer. It was her first time at the event. “It was a really friendly atmosphere and I will go back this year. There was a two day market just selling jam.

“I was worried it might be very competitive. But no, everyone wanted to share their tips and ways of working.”

Mrs Lauer turned her passion into a business after moving to a farm where there was an abundance of fruit and first giving her jars away to friends and then selling it on a local market. She began to win prizes and six years ago decided to go full time professional with just her partner to help.

“I started making jam because when I was little I used to make it with my grandmother and I have so many good memories of those times.

“I began with classic fruits like strawberries, and then began experimenting by adding spices or mixing fruits. Customers like the traditional aspect of eating a good jam but are also keen to try new flavours. I make a grape and spice jelly, an apricot and cinnamon jam and a range for a client where I add saffron.”

Jam uses simple ingredients. Fruit, sugar, water, lemons. So what makes one jam better than another? “What people want is to taste the fruit,” says Mrs Lauer.

“To achieve that you need really good fruit to start with. Over-ripe fruit is no good in jam; there are fewer vitamins, the pectin levels are reduced and the taste won’t be as good.

“Cooking time is important and then there are different methods. Either you can leave your fruit to macerate in the sugar or put it into syrup. I prefer macerating the fruit.”

French jam makers also swear by their copper cauldrons: “It is traditional but it is also perfect for making jam because it is an excellent heat conductor and when the fruit comes into contact with the metal it releases its pectins. Stainless steel or aluminium is okay, but I think copper works better and is more beautiful.”

Visitors can meet her and buy jams direct from her farmhouse www.lespotsgourmands.fr