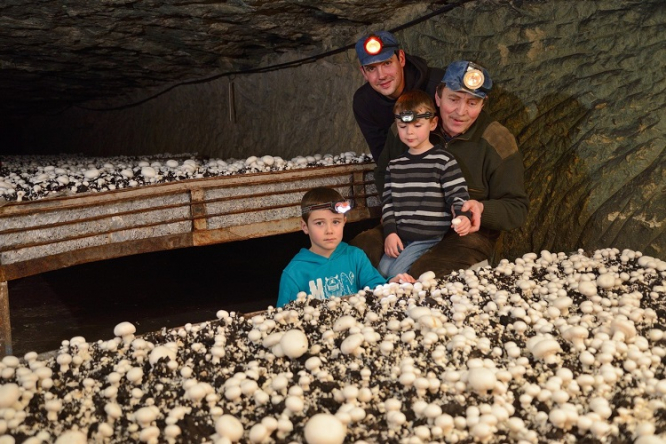 The mushroom originates in Versailles and was grown by La Quintinie, gardener to Louis XIV. Around the time of Napoléon III, the mushrooms were cultivated in the catacombs and other Parisian cellars and at its peak around 1875, 300 producers in Paris were selling three million baskets of mushrooms a year at the Halles de Paris food market

But the start of construction work on the Paris metro network meant it was time for the operation to move. Today there are just six producers remaining in the Paris region: in the Val d’Oise, Oise and Yvelines.

Most of the production of the champignon de Paris upped sticks and moved west to the Anjou region, and more specifically Saumur, where 70% of the 200,000 tonnes that are grown in France each year are produced. They grow in quarries dug into the white stone on the banks of the Loire, which have a constant humidity and remain cool all year round, at about 15°C.

Saumur was also the perfect place because of its equestrian history – as horse manure is used as fertiliser for growing the mushrooms.

It is for this reason that it is recommended that the mushrooms are cleaned before use. Peeling and brushing will remove any leftover substratum – but plunging them in water will make them lose their flavour.

The champignon de Paris has black-brown strips when ripe, brownish spores and a fleshy smooth white cap. Rich in minerals and vitamins B, D and K, it is also high in fibre and helps add flavour to a low-salt meal.

It is a great accompaniment for veal escalope, a steak or stew, or in a forest omelette or soup.

If you fancy a trip to a mushroom farm with a difference, check out Champignons Delalande in the village of Bourré (Loir-et-Cher) - it has its own town carved underground.

23 hours ago
5
Coronavirus: Daily updates on the situation in France