France has world’s only chapel dedicated to rugby 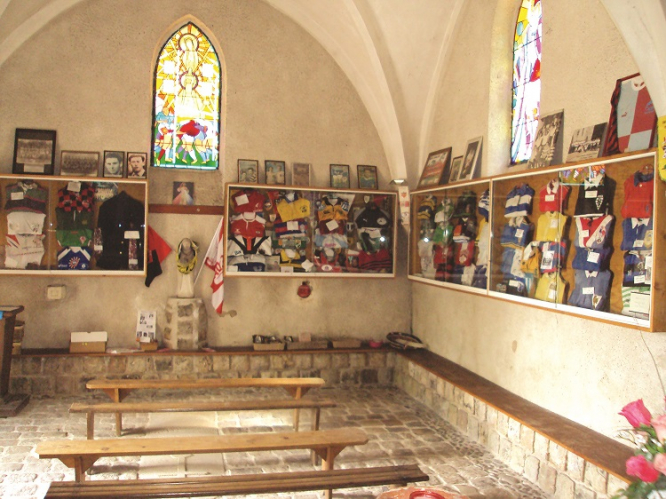 It is visited by rugby supporters from around the world as well as French fans, and is always popular during international events such as the Six Nations Championship, which begins this month.

Its modern stained glass windows show the Virgin Mary with rugby players and there are around 180 rugby shirts in the chapel, which have mostly belonged to players who have died or been wounded.

The idea came from a local priest, Michel Devert, who was passionate about rugby and trained local youngsters.

He had the idea to restore the 13th century chapel in 1964, following the death of three local players, Jean Othats, Emile Carrère and Raymond Albaladejo, who died in a road accident in 1963.

Morgan Bignet, vice-president of Les Amis de Notre Dame du Rugby de Larriviére-Saint-Savin says the chapel gives real support to those who have lost loved ones who were connected with the world of rugby.

His own rugby mad 19-year-old son died in a car crash and another member, Jean-Marie Bergez, lost his 21-year-old son twenty years ago while he was playing in the Linxe, rugby stadium, Les Landes: “It is a very special place for us both and helps us help others who come to present rugby shirts to the chapel as a place of memorial and pilgrimage for fans.”

Mr Bignet had already begun his own collection of rugby shirts from teams all over the world with his son before he died, and they had wanted to set up a museum together.

Mr Bignet continued on his own and opposite the chapel there is now an exhibition room with his personal collection of 430 shirts: “They come from France, Russia, Tunisia, South Africa and Israel, to mention just a few, and there are many from England where players have been especially helpful in giving me shirts. You can visit it for free when you come.”

There are around 15,000 visitors a year: “They include rugby players who are in the area for matches and rugby fans who are on holiday and tour operators include us on their itinerary.

There is also a prison in Argentina with a rugby team who have reproduced our chapel in their jail. They asked for an audience with the Pope and presented our Virgin Mary to him, which is now on his desk. An incredible story. The prison has told us that rugby helps lower recidivism rates by half.”

The Course Landaise is a local traditional form of bullfighting.