Introducing the French inventor of the electric car 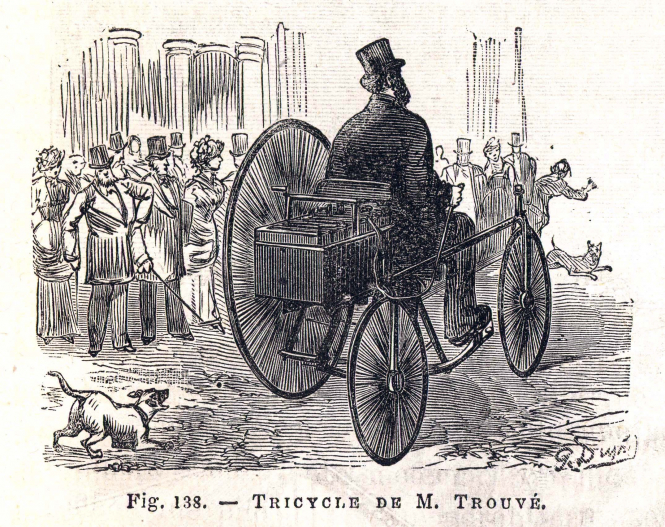 A MYSTERIOUS French engineer who invented the world’s first electric car 135 years ago is – finally – getting the recognition he deserves.

Gustave Trouvé (1839-1902) patented no fewer than 300 inventions, including many objects we now use every day. He was awarded the Légion d’Honneur in 1881, but nonetheless he died relatively unknown and was buried in an unmarked grave.

“He was very modest, he would probably object to everything I am doing for him!” said biographer Kevin Desmond, who has written a book on the inventor’s life, and campaigned for his achievements to be recognised with a plaque at the building where he lived in Paris.

The plaque was installed at the house in rue Vivienne, in the 2nd arondissement, on October 15, 2016.

Mr Trouvé’s most important inventions include an electric tricycle that was the forerunner of the electric car and boat, and a forerunner to the LED bulb, currently being promoted by the French government for being more environmentally friendly than standard bulbs.

He also revolutionised medicine with his version of the endoscope, and light therapy techniques for healing skin diseases.

“He was a genius,” said Mr Desmond. “He was a free thinker, and when electricity came along he realised he could adapt it to different purposes.”

Mr Trouvé is also responsible for the electric piano, as well as carbon-zinc pocket-sized batteries, and the frontal headlamps used by campers and speleologists.

But, despite the impressive range of objects he invented, he did not become famous. This is partly due to the fact that he never tried to commercialise his inventions, Mr Desmond explained.

“He was already wealthy,” Mr Desmond said. “He could have been a millionaire, but he didn’t care about money.”

Mr Trouvé was also a bachelor, and when the obligatory ‘concession’ for his tomb in the cemetery of his native town of Descartes, in Indre-et-Loire, was not renewed, his remains were moved into a common grave. His archives were destroyed after an accidental fire in 1980.

Another factor in his lack of fame was that petrol was taking over at the time Mr Trouvé was working on his electrical inventions, and therefore he may have thought that he had ‘failed’.

“It is ironic considering that now we are going back to electricity,” said Mr Desmond.

Gustave Trouvé died after cutting his thumb and index finger while working on his light therapy device for treating skin problems. He neglected his own wound, and septicemia set in. The inventor died, aged 63, on July 27, 1902.

Mr Desmond, a historian and biographer who now lives in Bordeaux, discovered Mr Trouvé’s work by chance while researching motor boats at the Science Museum in London. A librarian asked if he was also interested in electric boats, and showed him some files on Gustave Trouvé.