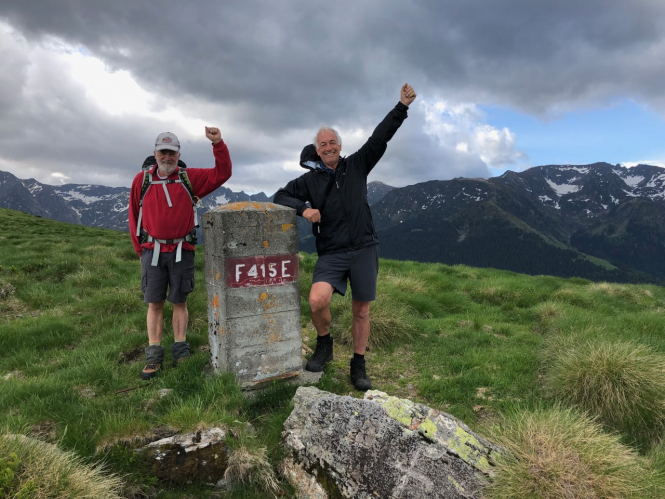 At midday on January 26, 1944, Rudy Zeeman crossed the border from France into Spain near the small village of Canéjan. His crossing of the Pyrenees mountains had taken three days - and it saved his life.

Rudy was escaping persecution in Nazi-occupied France, and neutral Spain offered the hope of freedom.

After the war, he started a new life in Tasmania where two of his neighbours, retired mining engineer Russell Reid and former doctor Gavin Earles, became friends.

After hearing about Rudy’s wartime exploits, the pair decided to walk in his footsteps.

They contacted Paul Williams, at Pyrenees Mountain Adventure, who specialises in treks along World War Two escape and evasion routes. From the information about the route in Rudy’s book, Strength Through Adversity, Paul was able to plot exactly where Rudy had walked.

“It was not the first time someone had asked me to trace the route and I like the detective work involved,” he said.

“I use my knowledge of the mountains and my detailed walking maps. Sometimes I have to get inside the head of the guide or passeur, who led the group, to work out where they went.”

Gavin and Russell, both in their early 70s, completed Rudy’s trek in four days and Russell said: “We wanted to walk the route before Rudy’s 100th birthday in November. The experience was challenging and rewarding. Paul had spent time carefully tracing the original route. It was the same as Rudy’s, except in one place where a steep descent was too dangerous.”

The group stayed in shepherds’ shelters at night with basic facilities, not even running water, and Gavin said: “Conditions were not easy. The first day it was very hot and sunny and we were walking in temperatures of 30C, which was tough. On the second day, the rain started in the morning and didn’t stop, becoming snow by late afternoon as we reached 2,000m.

“Rudy had to contend with a snowstorm, so that brought his crossing alive for us.

“War forces ordinary men and women to perform extraordinary feats of courage and endurance, and retracing Rudy’s trek, which he did in winter, in the snow, in the dark, in silence with minimal equipment and food, and with Nazis trying to capture and kill him, emphasised to me just how heroic, tough and determined Rudy and his fellow evaders and guides were.”

Rudy is one of the last remaining World War Two escapers and evaders alive. He cannot write because of his poor eyesight but dictated a message to his two friends: “I never thought that one day a group would walk the same route as me across the Pyrenees.

“My two guides and five companions from the group in 1944 have all died but the memory of the crossing with them remains with me.”

Paul said: “Crossing the border was the highlight for me. Ahead of us in Spain we could see a partial rainbow and behind us a dark sky with shafts of light breaking through the clouds. To top it all, a lammergeier (bearded vulture – the biggest bird of prey in the Pyrenees) gave us a flypast. It was a magical mountain moment!”

Despite the constant threat to his life, Rudy still had time to notice the beauty around him. After saying an emotional goodbye to the two passeurs who had been their guides, the group descended 30 metres into Spain.

“Then we began to notice the spectacular views and appreciate the majesty of the Pyrenees, revelling in the wild beauty of the chain of mighty snow-capped peaks and rugged ridges, stretching as far as the eye could see.”