A country conversion in Normandy 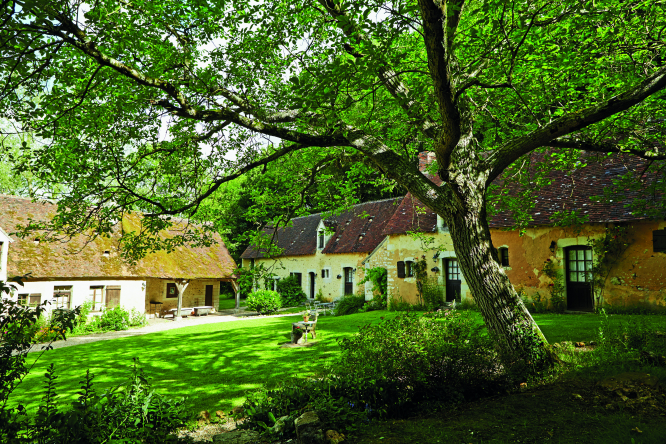 Arriving at D’Une Ile is like wandering onto a stage set for a period drama, a pastoral love story starring a rosy-cheeked milkmaid and a poetic shepherd. The mise-en-scène is a gathering of crooked stone cottages huddled around a sloping village green, their walls the colour of apricots, their clay-tiled roofs padded with moss, their doors wreathed with old-fashioned roses and their small casement windows shadowed by shutters and hung with curtains of gathered white muslin. Behind the cottages, the tall trees of an ancient woodland loom up to create a dark, theatrical backdrop.

However, unlike a movie set, or a model village, or Marie-Antoinette’s hameau, this is somewhere you can immerse yourself, because more than just a bucolic fantasy, D’Une Ile is also a hotel and a home. After you have found it, buried deep in the gentle hills of Normandy’s Le Perche, down a lane, past a pond then through an orchard, and have parked in the grassy car park, you realize there are no signs pointing to ‘Reception’, no desk with telephones and no forms to be filled in. Your passport won’t be taken nor will you be given a room key. Instead you will be warmly greeted by either Michel or Sofie, the young Dutch couple who own and run it. They will usher you into the big, beamed dining room, and offer you something to drink, and then they will show you to the door of the cottage where you will be staying, a door with no lock.

At this point, there will be another surprise. Because inside these old cottages are a series of interiors as unexpectedly contemporary as they are creative. Three of the five buildings are divided into nine guest rooms, some with more than one bedroom, which when fully occupied can accommodate twenty-eight guests. And although their exteriors are homogeneous, each is very different once you step behind its front door. One has a sunken bath in the corner, a separate shower room concealed behind a wired-glass partition, and a suitcase gramophone with a supply of vinyl LPs, while another boasts a chaise-longue in pink plastic, the frame of an old hospital screen as a clothes rail, and a bed set into a wooden platform painted mint green. Another has a manger along the wall above the bed, and a claw-foot tub set in front of a huge fireplace and bread oven.

One has a dining area on a mezzanine floor up in the rafters. And another – the most recently completed – has bedrooms in pods made from plywood and inserted into its shell at disconcerting angles.

All these interiors offer comfort, as well as visual impact, and are furnished with vintage pieces from Fabriek NL, mixed in with things found at brocantes and vide greniers, and works by Dutch artists such as sculptor and furniture maker Just van der Loos. But what is most unexpected about these fresh, modern spaces is that almost all the hard graft, the stripping out, the tiling, the sanding, even the plastering, was done by Sofie and Michel themselves.

The hotel opened in 2012, but the story of its creation began a couple of years before when Michel and Sofie were based in Amsterdam. Still only in their mid-twenties, Michel was making a living as a singer and composer, and Sofie, who had graduated from the prestigious Amsterdam Fashion Institute, was working as a freelance graphic designer, as well as teaching, and trying her hand at interior decoration. ‘But we were restless,’ says Michel. ‘We wanted to live a different life. And we came up with the idea of moving, ideally to somewhere sunny, and starting a business of our own, perhaps a restaurant. We both have a great interest in good food and wine – I come from a family of wine merchants – and I am passionate about cooking. I came across this place by chance, driving through France on my way to see Sofie who was staying with her parents in the South. There were two other people interested in buying it so I had to make an instant decision. I phoned Sofie and told her I had found paradise. She agreed that we should try to buy it before she had even seen it.’

Over the next few days Michel taught himself Excel, and they wrote a business plan in double-quick time, and persuaded a small group of investors to back them. The purchase went ahead, and they moved to France during a long, hot summer. The buildings date from the 17th century, and originally housed the estate woodsmen and their families, plus a few cows, pigs and sheep. In the 1970s, another Dutch man had attempted, and failed, to turn the place into a golf resort. It had subsequently been used as a holiday home and had not been well maintained. Sofie says the interiors were ‘super-ugly with horrible staircases, and vinyl wallpaper’. Undeterred by the lack of running water, and with the energy and enthusiasm of youth, they set to work.

Sunshine and help from visiting friends kept them going, but then came winter. ‘For a year and a half, we had no heating or hot water,’ says Sofie. ‘We bought a brazier that we used to huddle around, and as soon as we had put showers and hot water into the guest rooms we used to rush in and use them the minute guests had left’. Ever since they opened, the rooms have never been empty for long, as word spread of the dinners prepared by Michel using locally-sourced meat, fish and vegetables, the excellent vins natures, the unusual beauty of the place, and its relaxed, friendly feel.

The only remaining corner that has not been transformed is the biggest of all the buildings. This is Michel and Sofie’s home. It’s lovely as it is, with its spacious, high-ceilinged main room and broad stone fireplace, but it is not ready to be photographed. They have all kinds of plans for it – they haven’t decided which they like best – but the design might include a section of glass flooring, and possibly more plywood. Whatever they decide, you can be certain it will be imaginative and handsome. Nor would you be surprised, once it is all done, to hear that they are moving on to their next project somewhere else in France, or even further afield. You can be equally certain you will want to visit if you can.

This is an extract from Perfect French Country by Ros Byam-Shaw with photographer Jan Baldwin, published by Ryland Peters & Small.

The book is available at www.amazon.fr

Connexion readers in the UK can purchase the book at the special price of £25 including P&P (rrp £30 by telephoning Macmillan Direct on 01256 302 699 and quoting the reference KC8).

NOW GET THE LOOK

Recreate Michel and Sofie’s twist on rustic chic in your own French home with these purchases from French retailers.

Flower power
Keen to add a splash of floral colour to your cuisine? Bring blooms from the garden and display them in a simple ‘Doris’ transparent vase from La Redoute. €49.99/€29.99.
www.laredoute.fr

Suspended belief
Add some industrial chic to your minimalist country bedroom with this antique metal Cornouaille light from Leroy Merlin. It pairs perfectly with a retro-style lightbulb.
€39.90. www.leroymerlin.fr