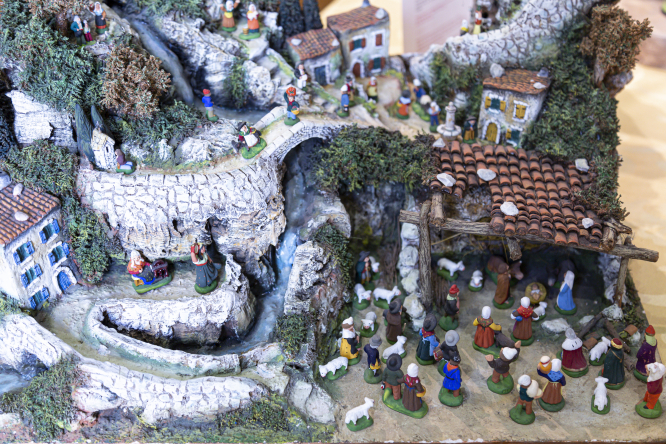 Every day the santons are moved to create a new scene. Finally, on Christmas Eve, the Baby Jesus is laid into the manger, at midnight.
By Camille Renoux

During December in Provence there are numerous fairs selling individual handcrafted traditional crib figures known as santons made in the region.

One of the oldest workshops is Santons Marcel Carbonel, named after the first man to be awarded Meilleur Ouvrier de France for his work as a santonnier in 1961 (santonsmarcelcarbonel.com).

The company, awarded Entreprise du Patrimoine Vivant for its traditional savoir-faire has stayed in the same family for four generations.

Why are santons made in Provence?

The first live crib was created by Saint Francis of Assisi during a mass in the forest of Abruzzi in Italy in the 13th century.

In the 17th century we know that a Capuchin friar, with a gift for sculpture, reproduced the characters for use by his congregation in Marseille.

Up until the Revolution, churches used to have nativity scenes at midnight mass, but afterwards these were forbidden and people started making miniature versions they could display in their own homes.

First, they would make them out of anything to hand, but gradually a profession grew up around them.

Master-craftsmen appeared in the 19th century and they would include characters from everyday life.

The first annual Foire aux Santons et aux Crèches was in 1803 in Marseille, and it is still an annual event today. Provence probably became the centre because the craftsmen made the figures out of clay which was readily available in the region.

Who was Marcel Carbonel?

He was a well-known santonnier who had studied at the Beaux Arts and worked as a lithographer before he started making his first crib figures in 1935.

His father, who was an electrician, also made cork santons as a sideline, which he sold at the Foire aux Santons in Marseille.

When he died, Marcel started making his own, out of clay. His figures stood out from others because he made his own natural pigments, still used today, to decorate them so they were brightly coloured but not shiny. He painted the faces with fine details which made the figures come alive as real personalities. He set up his first workshop in Marseille in 1942, and we are still here nearly 80 years later.

How are the santons made?

Everything is done by hand. First a character has to be designed and created.

Every year we introduce a new one to our range. Then a plaster mould is made and copies of a poorer quality are made which are sent out to our crafts people who mostly work in their own homes.

The poorer quality mould is designed so that it will not last for long, so it won’t be copied. It is in two parts. The clay is pressed into each side and then pressed together. The figure is released from the mould and carefully trimmed so that you cannot see any trace of the seam.

The craftsperson adds fine details such as the handle of a basket or the drumstick of a tambourine player by hand. After drying the figures are fired in a kiln. “Each piece is checked at each stage of the production and rejected if there is the slightest sign of any defect.

There are two firings a week all year round. Santons are in the kiln for 24 hours. It takes 12 hours for the kiln to heat up to its maximum temperature of 980°, they bake for six hours and then it takes six hours for the oven to cool so the figures can be taken out without cracking.

How are they decorated?

There is a chief decorator who works out the detail of each character and other decorators follow his or her instructions.

The watercolours are all prepared in our workshop. Each figure has 16 layers of paint. The decorators paint 50 at a time, and repeat the same layer on each one, so by the time they have reached the last one, the first has dried and they will be able to start with the next layer.

Each decorator paints around 150 a week. Each piece is checked at each stage of the production and rejected if there is the slightest sign of any defect.

What skills do you need to make santons?

You have to have passion and dedication. Santonniers have to be very meticulous with great attention to detail.

Who are the figures in a Provençal crib?

The different local crafts and jobs are represented as well as the biblical figures found in all crib scenes.

They come from the Pastorales Provençales, [plays which are traditionally acted out around Christmas, particularly around Marseille. They depict the nativity story as it would have happened if it had been in Provence].

Our characters come from one of the most-famous pastorales called la Maurel. All types of work carried out by local people are represented. There are olive pickers, stone masons, shepherds, lavender pickers, a woman with a baby, a monk, a fisherman and so on. Every year we add a new figure. This year’s was a hat maker.

When is the crib set up?

Traditionally, families open the box where the crib has been stored all year in November. They plan what it will look like and what new characters to add.

Maybe there will be a walk to collect moss, leaves and small wood chips to decorate the scene. It takes time to set it up. The finished crib is then traditionally on display from Sainte-Barbe, on December 4.

This marks the beginning of the Christmas season in Provence when wheat grains are planted in three saucers of humid cotton and if they have grown well by Christmas Day it is a sign of a good year ahead. Every day the santons are moved to create a new scene.

Finally, on Christmas Eve, the Baby Jesus is laid into the manger, at midnight. The three Kings start approaching until they arrive for the Epiphany. The crib is then put away until the next year.

Are your clients mainly from Provence?

We have customers all over France. It is a tradition that has spread throughout the country. Often families add a new figure every year and grow their collection.

They are all types of people. Provençal, Parisian, religious, carrying on a family tradition. Often the crib is passed down the generations and we have families who have been faithful to us over many years. We also sell to the United States, Japan, Belgium and Switzerland.

Many countries have their own cribs. What is different about those from Provence?

They are made in many different materials including wood, cork, paper, glass and porcelain. In Provence, they are made from terracotta. There are five major producers including ourselves in the region and we all have our own characteristics.

Not just for Christmas: How to grow poinsettias year-round