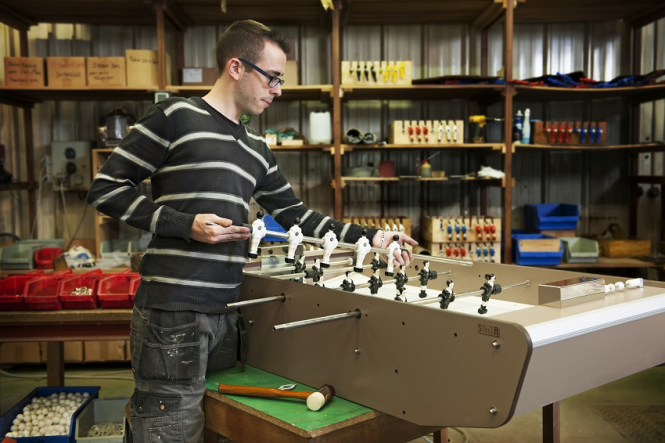 Making of a Stella Baby-Foot
By Connexion journalist

Baby-foot, French for Table Football, is back in fashion – and not in the bistros and cafés it first appeared in, but in workplaces, homes, even luxury hotels.

Stella, based at Tourcoing in the Nord, has been making Table Football games for the past 90 years.

Since director Nicolas Chantry took over in 2015, the company has seen annual increases in production of 30%.

Mr Chantry is passionate about the games he produces and is even creating a museum dedicated to this iconic game: “In the Sixties there were 200,000 cafés and bistros. They were popular places for workers to go, and they played baby-foot.

“When the arcade and flipper games came in, they were more profitable for the café-owners, because you had to pay more to play and then, when cafés began to shut down in the Seventies and Eighties, baby-foot began to die out.”

Now, he says, the game has made a comeback, because once again we are looking for a game everyone can play together irrespective of age or rank: “It creates social links and connections.

“In a family, grandparents, parents and children can play together; in the army, captains can play with privates, and in the workplace, bosses can play with employees. Today, people want to get back to sharing something together which is simple, authentic and fun and where they are together physically.”

It has even become a luxury item. Stella has developed limited-range editions, including one with players in chrome and nickel, legs from original Seventies’ tables and Bakelite handles.

The grand five-star hotel Royal Monceau-Raffles in Paris chose No 001 from this series to grace its entry-hall: “This led us to other prestigious orders,” said Mr Chantry.

“We got an order to make a personalised Baby-foot for Céline Dion when she stayed at the hotel and it prompted a sale to the King of Morocco.”

He says they usually cater for more modest clients – though their handcrafted tables do not come cheap, costing from €850 up to €4,000. He says they are built to last, unlike models from China, and have a two-generation, or 50-year guarantee.

Quality is also the hallmark of Sulpie in the Charente. They, too, have seen a rise in demand and specialise in upmarket models costing from €1,490.

The company was founded by the present owner Olivier Sulpie’s father and uncle who were both carpenters, but decided to start making table footballs when a fairground traveller brought them one to see from Italy in 1959.

Their business ceased in the mid-Seventies but was relaunched 10 years later by Oliver Sulpie, who thought there was now a future in baby-foot.

The tables are handcrafted in beech from sustainable forests and the colours and décor can be chosen by the client.

“I think people like the game because it is convivial and cannot be satisfactorily replaced by an electronic game,” he said. “I take great pleasure in going to work every day to make them. La vie est belle.”

Many of Sulpie’s clients are businesses, and they will use the company logo and colours to decorate the table and players’ shirts.

Employers see the game as an excellent way of getting employees to get to know each other and de-stress; Trivago and Google have baby-foot in staff rest areas and a study for the internet job search platform Joblift found that in the 15 million job ads they analysed, 20% of employers mentioned the games they have on offer as an attraction for new employees.

Baby-foot was mentioned in half of these, showing its popularity has endured despite the closing down of cafés and the internet age.