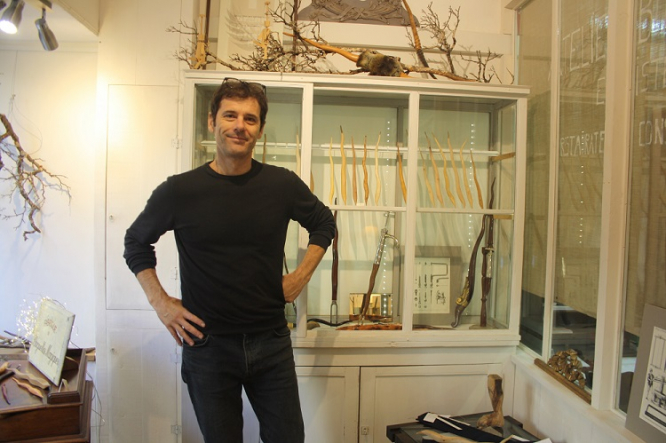 He was the son of a cabinetmaker but it took him time to realise his passion.

He tried first to make a career in buying and selling before deciding to set up his own workshop almost 20 years ago.

Mr Mournard has always been gifted with his hands.

He said: “I started at 22. I obviously learned a fair amount from my father but after a few years in the trade it came naturally to me.

“I was passionate about wood and old furniture, so I started to study and do apprenticeships to learn how to use the machines and learn about the different types of woods.”

Now 47, he works with an apprentice in his small workshop in Nice city centre.

He works with the same tools used 300 years ago as machines cannot reproduce the same results, he said.

“It takes longer but it is interesting to work by hand.”

At the beginning of the 2000s, when he first opened his workshop, he was looking for ideas to give more life to his shop window and created his first wand. He has now sold thousands but remains quite surprised by this success.

He said: “It was the time when Harry Potter was first released and I was listening to a song speaking about wands.

“Wands were fashionable. So I made two or three. People loved them and they did not stay long in my shop window.”

Every wand he makes is unique. The wood can be different, as well as the shape or the details on it. Sometimes, he puts a pearl on it, sometimes he engraves it.

He can let his creativity out when making wands. He said: “It is an unlimited item.

“It is not useful but is linked to our imagination and we can do anything with it. It can be used as a decoration, as a game or in plenty of other ways.”

Most of his clients buy them as gifts for children, but they are also bought by adults.

He added: “My two daughters both have one.

“They do not use them all the time but would not want to ever throw them away.” A piece of furniture can stay from four days to a month in the workshop, according to what has to be changed and the different finishing touches.

Tools to add decorative items on a piece of wood, and others to cut, draw lines, and add mouldings are used throughout the renovation process.

He rarely buys wood as retired cabinetmakers always give their stock away.

There are a variety of ways to become an ébéniste. You can pass a CAP (Certificat d’aptitude professionnelle) ébéniste in a professional lycée and do different apprenticeships.

After the CAP, you can continue with a brevet des métiers d’art ébéniste, or a brevet technique des métiers ébéniste.

However, experience is the most important attribute.

For Mr Mournard, the love of wood and using his hands are essential.

He said: “I love everything in my job, from working on 18th-century pieces to renovating a chair. But what I love the most is that it is always varied .”