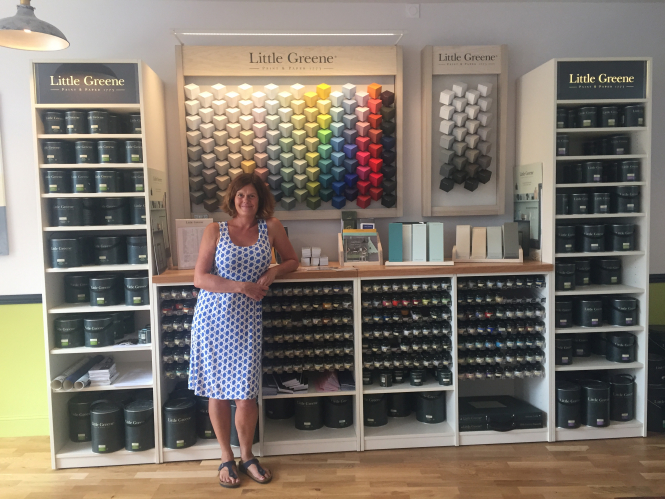 When Beverley moved to France with her three children – twins aged nine and a son aged 11 – in 2010, running a business was the last thing on her mind.
“I bought a holiday home in France and decided to come over for a year to experience the French way of life,” she said. “When the year was up, the kids asked if we could stay – and here we are!”
A few months later, Beverley, 53, bought a business from a friend who was moving away after a break-up. “She was selling a business, dealing in Little Greene paint, and I went to the auction to support her, but ended up investing!”
With little French and no desire to grow the business, Beverley sold the paint from home, keeping the existing clients and acquiring a few more via word of mouth.
However, in 2015, she decided it was time to branch out.
“I found great premises and decided to take the plunge,” she said. “It took just over two years to get all the planning and complete the redesign but we’re now open for business.”
Beverley decided to remain in her small village location to take advantage of the supportive community.
“I wanted to remain in the locale. People here have been so supportive – and my business has increased dramatically.”
The shop now sells wallpaper, Frenchic furniture paint, linen and bedding as well as the original Little Greene paint, and Bev­erley – who trades as a micro- entrepreneur – has plans to branch out.
“The building is huge and I’m going to run courses on sewing and upcycling.
“I’ll also be opening a teaching kitchen, teaching every­thing from making cosmetics to cooking.”
The village, which has a boulangerie, butcher, bar and pharmacy, has proved the right location. “I have so many people coming through the door, it’s non-stop!”

A little English makes all the difference for business

Like many, former teacher Beth moved to France for a more peaceful way of life – initially opting to run a gîte with husband Michael after their move in 2003.
But, when his health took a turn for the worse, they moved to a smaller property, and 60-year-old Beth found a new direction. “I’d dabbled in jewellery as a hobby, and a friend suggested I try selling it. After a while, I was selling at artisan fairs and medieval markets. I also began to sell at Château d’Apremont.”
When the chateau changed hands in 2016, the new owners decided against hosting traders and Beth joined friend Anne Stead, who creates handmade gifts and cards, in opening a retail outlet.
“We found premises in Apremont town centre. It’s very small; but it’s a massive area for tourism.”
The pair, both micro-entrepreneurs, were realistic about the likelihood of trade and decided to open only from April to September for the tourist trade; saving on overheads during the quieter months.
“Apremont is rather quiet out of season, but in season, it’s packed. We’re also opening for a week in December to provide customers – regular and new – with a selection of Christmas gifts!”
They also found an ingenious way to bring in more potential customers. “We already had quite a decent footfall – partly as I was already known in the area – but when we realised many tourists had trouble finding the tourist information, we put a card in our window saying: “English spoken/Local knowledge.”
“Tourists of many nationalities – Dutch, Spanish and English – came into the shop for directions, and often ended up buying something too!”

We don’t earn a huge amount but it is enough

When antique dealer Philip moved to France in 2014 with wife Maggie, 56, he intended to continue trading in the UK.
“I’d been in antiques for a few years, often sourcing them from France,” said the 61-year-old former police officer, “and when Maggie had an accident and was forced to give up work, we moved here for a better quality of life.”
But the journey back and forth to sell antiques took its toll. “It was such a long way from Haute-Vienne. I tried doing vide-greniers and antiques fairs over here, but they can be very hit and miss.”
The difficulties in distance and lack of custom led Philip to reconsider his options.
“Eventually, I decided to open a shop locally; that way, I could stay in one place and let people come to me!”
Having found premises in his home town, Philip began to stock an assortment of books alongside his bric-a-brac and antiques.
“I started off selling English books, then I started getting more inquiries from French people for both French literature and English language
fact-books, including – surprisingly – books on the British Royal Family!”
Despite only opening three days a week, Philip – who also lists titles on eBay – has found his turnover has doubled from his vide-grenier days.
“Le Dorat is quite touristy. Locals often come to have a browse – they like the fact that I’m here. I get around 20 customers in a day. It helps that I’m the only second-hand bookseller in the area.”
But for micro-entrepreneur Philip, it’s the quality of life in France that’s the real winner:
“I earn enough working here. It’s not a huge amount, but it’s all we need – we didn’t come to make a fortune, we came for a better life.”