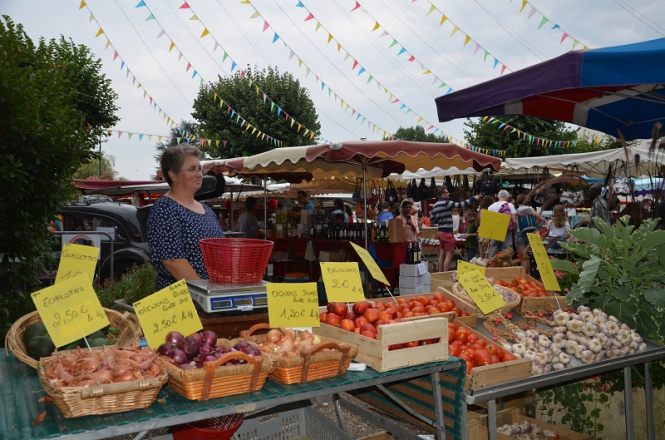 One Dordogne town celebrated the 700th anniversary of its market this month. The market has been held every Tuesday since 1319, and not even World War Two shut it down.

The weekly market in Le Bugue continues to flourish, showing that markets still have an important place in towns, despite competition from supermarkets.

It is one of the most popular and busiest markets in the region, with stallholders coming from far and wide to benefit from the crowds who flock there, particularly in summer.

The market was established by royal decree because a local lord, Pierre de Galard, was friends with Philippe V.

There is a reproduction of the decree in the marketplace.

It says the market had been previously held “irregularly, sometimes one day, and sometimes another”, and that now this would be “fixed and stable”.

Gérard Fayolle, local historian, previous mayor of Le Bugue and former senator, said that until then the organisation of markets was haphazard. He said: “Because there were no rules, nobody knew when the markets were being held and it led to quarrels and legal proceedings between towns.

“The new towns of the period, which were the fortified bastide towns, like Domme and Monpazier, were created with market regulations, but older towns often had to wait and not all managed to get a royal decree. All towns eventually regulated their markets, but it is very rare to find one that has had the same market day throughout the centuries.”

A total of 300 stands are signed up to operate during the summer in le Bugue and many stallholders have been coming for decades.

Eric Castang, who grows fruit and vegetables at nearby Mauzens-et-Miremont, has been coming for 35 years. He said: “Before that, my mother used to come. It is worthwhile and we always sell well. I go to another market too, but this is the biggest. The type of buyer has changed. It used to be local people coming to do their weekly shop. Now there are far more who come to visit the market as an attraction, particularly in summer.

“The amount we sell every Tuesday has remained constant, but the market-goers have changed.”

Martine Auzy has a farm at Thenon, which has its own market 40 minutes’ drive away.

She said: “I prefer to come here because it is much bigger than the one in my town and it has a very friendly atmosphere.

“I sell what is in season, which might be mushrooms, truffles, walnuts, duck, jam and the local speciality fritter, the oreillette beignet, which always sells well.

“I have always had the same spot, in Les Halles, pleasant in summer, but very, very cold in winter as you always catch the wind blowing through – but it is worth it.

“I like the personal contact with the people who buy and it allows me to explain my products to them.”

Markets are also welcomed by the new generation of organic growers.

Hughes Picard has recently started an organic market garden at Saint-Geyrac, Dordogne, and this was his first season at Le Bugue. He said: “I also sell to local organic shops, sell from my farm and to a restaurant, but my best outlet is here.

“Markets are very important for young producers like me.

“I enjoy it, too, as it is my weekly day out. The rest of the time I am alone working with the crops.”

Christianne Pieters drives nearly two hours to bring her fruit and vegetables from her farm in the Gers. She said: “I have been coming for 10 years, and though it is a long way, I come because it is such a good atmosphere and I get good sales here.”

The man who has seen the most changes in the market is 96-year-old Maurice Clavière, still working in his cobbler’s shop, which overlooks the street where there are the most stalls.
He said: “This market kept going even during the war. At that time people were pleased to be able to buy anything when supplies were scarce. They came with their horses, which they left in stables set up for market-goers.”

He said entire families would arrive in the morning, but at midday the women would go home and the men would stay to eat together in a restaurant.

“They paid with the money they had earned that day,” laughed Mr Clavière. “Times have changed and it would never happen now!”

Maryvonne Piques, local councillor responsible for culture, said: “I know nearly everyone here and market day is a day for people to socialise.

“The market brings people in, who also spend in the local shops, cafés and restaurants.

“It is also good for local producers who can sell their wares here. I have lived here since 1983 and it has always been vibrant and bustling.

“There are perhaps fewer farmers now and more trinkets for the tourists. But it is as important and as lively as ever.”