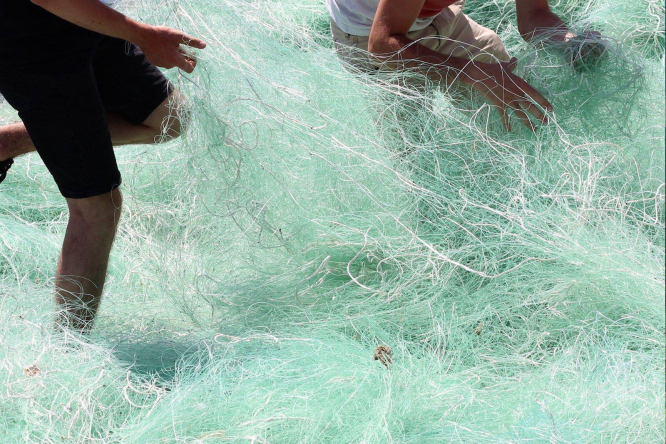 The company, Fil & Fab, has other projects in the pipeline, especially in the boating and plastics industries Pic: Courtesy of Fil & Fab

Three young entrepreneurs based in Plougonvelin, near Brest in Finistère (Brittany) are transforming abandoned nylon fishing nets into sunglasses.

Their company, Fil & Fab, use bales of damaged nets otherwise destined for a skip, to be burned or buried (at great environmental cost), with up to 2.5tonnes said to be dumped every week. They first untangle the nets to ensure they do not mix up the required polyamide with other plastics.

'In the two years since the company was formed as a result of a student product design project, the start-up has already recycled 10tonnes of nets'

“We break down the fishing nets into small fibres, which allows them to be put to into the granulator. It then makes a large paste, from which we can extract granules,” Yann Louboutin, one of the co-founders, told Franceinfo.

The firm has patented its granules under the Nylo brand name and their resultant raw materials are already being used in a collection of sunglasses made in partnership with famous Breton fashion brand Armor Lux and spectaclemakers Acuitis, as well as a new ‘concept watch’, produced by Swiss watchmaker Ulysse Nardin.

The company has other projects in the pipeline, especially in the boating and plastics industries, added Mr Louboutin.

Municipal gardeners in Pau (Pyrénées- Atlantiques) have taken up arms in the fight against growing numbers of chenilles processionnaires (pine processionary moths), which are harmful to the host pine trees, as well as dogs – the pets are especially susceptible to an allergic reactions that causes tongue swelling.

Using paintball guns, in early June they fired female pheromone-packed capsules onto trees in order to disorient males, thus reducing reproduction rates by up to 90%. In total, around 1,500 capsules were fired onto 150 trees throughout the city.

Rouen artisans to get vehicle grant

The council in Rouen (Seine-Maritime, Normandy) has voted to provide financial assistance of up to €2,000 to artisans (craftsmen, or tradesmen) who need to buy a less polluting van for their work.

If they do not change their vehicle, they will no longer be able to work within a perimeter, called a ZFE (zone à faibles émissions, or low-emissions zone), which comes into effect in the city next July.

Certain vehicles will be banned, including light commercial vehicles and diesel trucks older than December 31, 2005.

“By 2022, the perimeter will be extended to about fifteen communes in the Rouen metropolis and then extended even further into 2023 for all individuals,” said mayor of Rouen and president of the metropolis, Nicolas Mayer-Rossignol.

Over 10 weeks, she visited over 40 places including companies, shops, schools, local authorities, restaurants and tourist sites, that have employed alternative ways of working, in order to reduce their waste.

Hotter, drier summers ‘will be the new normal in France’

Aerovillages project in France: Housing estate with planes in garage
20 January 2022
More from French Life
More from Connexion
Get news, views and information from France
Join the newsletter
Subscribe to The Connexion