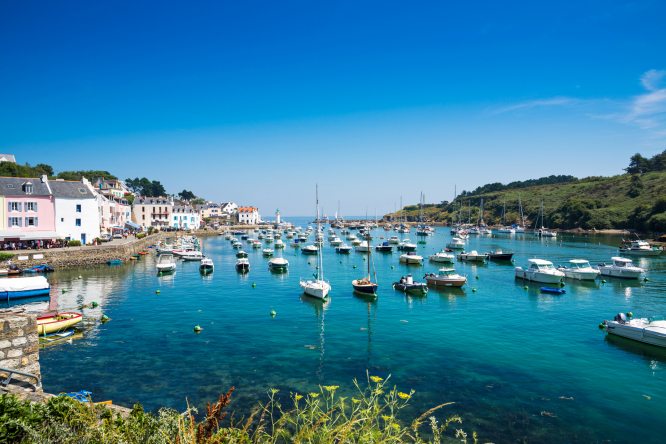 Environmentalist, Carole Balavoine, says of the new flight route from Brittany to Belle-Ile (pictured): 'We don’t question health flights at all, they are useful, but commercial and business flights, are a plague for the climate' Pic: Alexander Demyanenko / Shutterstock

An estimated 23billion (yes, billion) cigarette butts (called mégots in France) are dropped in the street every year, and the government has announced a huge new fund for local communities to help collect them.

However, it is not the French taxpayer that will be paying for the measures – €80 million will be collected from cigarette manufacturers, under a law from February 2020 designed to fight against waste and promote a ‘circular economy’.

Local authorities will receive monies to pay for clean-up campaigns, awareness- raising operations and the distribution of pocket ashtrays on beaches or on the street, with the aim of reducing the annual volume of discarded mégots by 40% in six years.

A Strasbourg husband-and-wife team of biology researchers have developed plants whose bioluminescence can provide electricity-free lighting, in tandem with CO2 production.

Rose-Marie Vesin-Auclair and husband Ghislain have created a company, Woodlight, which uses a process that does not disturb a plant’s natural cycle. “We project DNA-coated beads onto them so that they can then be integrated into the plant’s genome and have these new abilities without affecting the rest,” Mrs Vesin-Auclair told Franceinfo.

There are several possible uses for the bioluminescent plants, she says: “For example, in parks, on bicycle paths or along roadsides, we don’t necessarily need powerful lighting, but just markers for safety. Our plants could also bloom in shop windows and we can also use them as a decorative objects”.

The pair aim to obtain a final, working prototype before the end of the year.

Row your boat... and clean as you go

A kayak rental company in Caen (Calvados) is offering free balades (trips) to environmentally-committed rowers who promise to clean up waste such as discarded bottles and paper.

The programme is set to continue until October, weather-permitting.

From next spring, authorities in Bouchesdu- Rhône are set to introduce tests to limit traffic heading towards its idyllic calanques (creeks, or inlets), just a few kilometres along the coast from Marseille.

The move, which will see restricted access to motorists on the roads around Sormiou, Morgiou and Callelongue during several weekends in May, is part of a broader programme to reduce degradation of the shoreline and maintain biodiversity.

Other measures aimed at protecting the sites from mass tourism include a ‘demarketing’ campaign, as well as a new timeslot booking system for those visiting the National Park of Calanques.

This is the first time that such as system will be used at a national park France.

This summer saw the launch of the shortest commercial flight in France – just 57 kilometres and a duration of 14 minutes – from mainland Brittany to Belle-Ile.

The flight costs €200 for a round-trip and has been denounced by one environmentalist, Carole Balavoine. “We don’t question health flights at all, they are useful, but commercial and business flights, are a plague for the climate,” she said.

Loïc Andro, CEO of Finist’air which operates the flights, said “It is no more polluting to leave Vannes to go to Belle-Île [by car and then boat]. I think there is 10% less carbon footprint.”