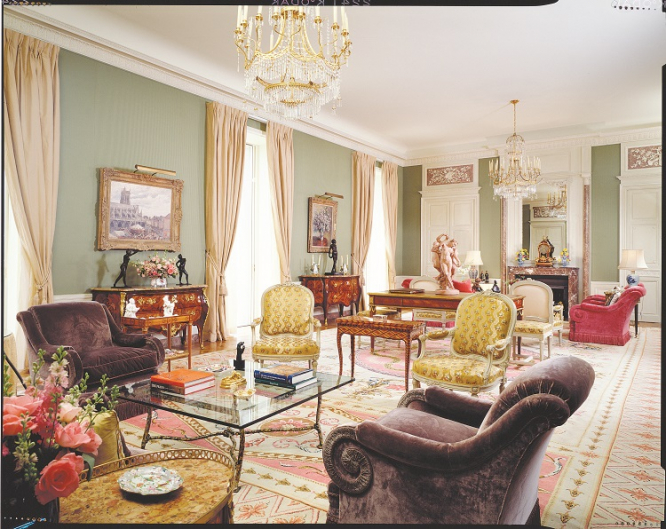 Samuel’s work at the Los Angeles home of late Univision billionaire A. Jerrold Perenchio where priceless artworks were paired with Louis XV commodes
By

I always admired his perfect taste,” acclaims Hubert de Givenchy, the legendary couturier who had many friends and clients in common with Henri Samuel. Samuel brought this “perfect taste” to his work, expertly and elegantly interpreting historical styles for contemporary living. He was proud that there was no so-called Samuel style, that one couldn’t instantly identify his hand in a room.

It was more important that the interiors he created reflected his clients’ personality and functioned as a life-enhancing backdrop. Samuel had a passion for living well and an interest in contemporary life that infused his work with a sense of both well-being and dynamism. This resulted in the landmark decoration of his Pompeiian-red salon, which has become a highly influential twentieth century interior. It is considered pioneering for its pairing of classic French high style with contemporary design for an overall effect that continues to surprise and dazzle.

For a designer who delighted in the past but embraced the present, it is fitting that both his classical and contemporary contributions to design are celebrated today. During his career, high-profile commissions for the Rothschild family and the palace of Versailles demonstrated his command of historical styles.

One American client with traditional taste admitted that he might not have hired Samuel if he had first seen the decorator’s own residence because of the mysterious sculptural furniture by François Arnal, Philippe Hiquily, Ron Ferri, Guy de Rougemont, and other artists populating his salon.

Today, it is via this furniture and how Samuel incorporated it into a high-style decor that a new generation is learning his name for the first time. Yves Gastou, who worked with the sculptor Philippe Hiquily and now with his estate on a new edition of Samuel-edited pieces, states, “All the great decorators and architects are inspired by Henri Samuel. He was an initiator who dared to include little-known artists in his interiors.

“He had the courage to depart from the ponderous eighteenth- and nineteenth century styles with a wonderful eclecticism. He was a pioneer.”

In November 2014, the New York gallery Demisch Danant opened the exhibition Paris Match: Henri Samuel and the Artists He Commissioned, 1968–1977. Gallery co-founder Suzanne Demisch notes, “Henri Samuel captured an environment that still resonates today. He represents a new age, a time of decorators who were successfully mixing historic material with contemporary art and objects in a very glamorous way.”

Swiss architect Rodolphe-Pierre Lasser worked for Samuel between 1955 and 1960. He recalls: “This was when Henri Samuel was at the height of his career. He was working all over the world. These years, from when I was twenty to twenty-five, were very important to me and were essential to the future success of my own business. One of Samuel’s greatest strengths was his sense of public relations. He was very social.”

Like Samuel, the interior designer Jacques Grange prides himself on the diverse nature of his work. With an academic understanding of the past, he has the pulse of the present. “I don’t want to stay with established taste,” Grange has said. “I like to take risks.”

He has created densely layered interiors for collectors such as Pierre Bergé and Yves Saint Laurent as well as spare, curated ones for others. While working for Samuel between 1965 and 1968, Grange experienced the charge of collaborating with artists, such as Diego Giacometti, and continues to incorporate contemporary creations in his own work. “I was twenty-three, and everything was possible,” he recalls. “I wanted to work for Monsieur Samuel – he was like a king.”

The world of haute decoration is a small one, and Grange’s work has overlapped with Samuel’s many times. The next generation of Samuel’s clients have turned to Grange, such as beauty entrepreneur Terry and her husband, Jean de Gunzburg, whose parents Baron and Baronne Alain de Gunzburg lived in an hôtel particulier decorated by Samuel. Terry de Gunzburg recounted to Architectural Digest, “As our mutual friend Pierre Bergé says, ‘Jacques has the talent for doing houses that don’t look done up,’” a sentiment Samuel would have approved of.

Henri Samuel’s name is almost unknown by younger generations of American designers. Brian J. McCarthy, who opened his New York office after years of working for the esteemed firm Parish-Hadley, is one exception.

“The evolution of Henri has always fascinated me. When I think about his first apartment that was so classically eighteenth century compared to the last home he did for himself, it is clear he was always bringing curiosity and new thinking to his design.

“He introduced any number of artists and furniture designers that we revere today and his living room was a sort of salon style of the arts in a way that wasn’t didactic or obvious. It didn’t feel gallery-like.”

Essential to Samuel’s work were his clients’ own collections, which brought an added dimension of personality to the room and also made the resulting decoration a collaboration. McCarthy remarks on how, with the twenty-first-century’s pervasive expectation of immediate gratification, the art of collecting is disappearing.

“Today people don’t spend the time to find things, and they don’t take the time to enjoy the process of finding things. And by finding, and seeing, and looking, and doing all of that, you’re learning. And that’s the only way one can begin to separate the good from the great.”

McCarthy ruminates further on why Samuel’s interior decoration still beguiles and surprises today: “There’s an order and structure to classical French rooms and while Henri would bring that order to them, there’d be something that would shake it and break it, and make it youthful. There’s something so smart about the way he decorated; it’s beyond timeless.

“If you re-created one of Henri’s rooms, it would look as fresh today as it did then. To me, that speaks volumes about how great he was. He was a genius, pure and simple. He should be an inspiration to all.”

With canny French high street and online purchases, you can recreate some of Henri Samuel’s aristo-chic at home. Prices and availability correct at time of going to press.

Let there be light

Each side of this Louis XV Saint-Étienne chest has a decoration of leaves and flowers in quality marquetry. The frame is made of solid Asian mahogany, the inlaid elements are rosewood, blond mahogany, acacia and boxwood.
€489 from www.royaldecorations.fr