Mother’s Day – How it is celebrated in France 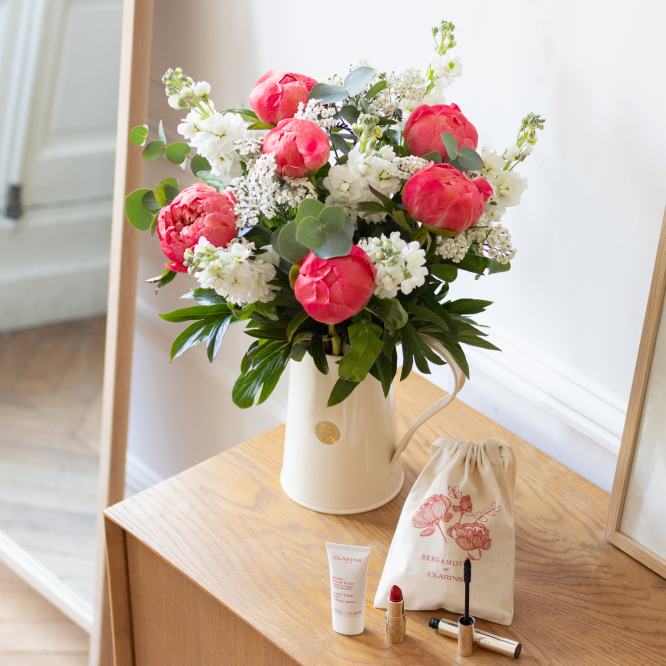 Florist Bergamotte has teamed up with beauty company Clarins to combine flowers and cosmetics in a single gift...
By Jane Hanks

Mother’s Day - Fête des Mères - will be celebrated by families in France on Sunday, June 7.

Since the concept of a special day for mothers was introduced in the early 20th century to honour women with large families, the nature of the day has changed with the emphasis on offering a special gift to your mother.

Some say it has become over commercialised, but a YouGov poll in 2019 found that 68% of those questioned still think it is an important day and found that adult children will spend on average between €20 and €30 on a gift for Maman. Top offerings are flowers, followed by perfume, a family get together in a restaurant and jewellery.

Traditionally, younger children make gifts with their teacher at school to take home and proudly present them on the day itself. There are likely to be fewer poems, cards and lovingly crafted salt dough creations this year, though, as many primary children are being homeschooled following Covid-19.

For “grown-up” children, shops and online websites are going that extra mile to produce special gifts for Mother’s Day, after many were forced to close during confinement.

Florists, in particular, hope the public will choose bouquets this year. Traditionally the most popular are made up of roses and peonies, always in flower at the end of May and beginning of June.

Read more: How to build a cosy hedgehog cabin

Val’hor, which represents the horticultural profession has launched a media campaign to persuade more than the 8% of households who bought flowers for the Fêtes des Mères last year to visit their florist this weekend.

Turnover in the sector is down by 86% compared to the same period last year.

Online French florist Bergamotte has teamed up with French beauty company Clarins to combine cosmetics and flowers for a traditional French gift combining beauty products and a bouquet with peonies from the Var.

Covid-19 is never far from the spirit of this year’s Mother’s Day. Bergamotte and Clarins promise that for every purchase of their Bouquet PARIS, which comes with an 'essential' beauty kit, they will give €2 to the Fondation des Femmes which launched a campaign this March to support women who are victims of the violence which rose dramatically during the confinement period.

Fête des Mères in France would not be the same without its tempting gourmet delicacies, with top patisserie chefs creating favouring strawberries and chocolate for their Mother’s Day treats.

World-renowned Parisian food company Dalloyau offers a sumptuous fraisier that can be ordered for either four, eight, 12 or even more servings.

The recipe was created by Jérémy Del Val, a winner of the Championnat de France du Dessert and is made of fresh strawberries, a vanilla mousse, an almond and hazelnut biscuit and cream with a touch of Kirsch. It can be ordered to cater from 4 to 50 people, and costs €99 for ten servings. It is available in Dalloyau’s seven boutiques in Paris.

Another grande patissier, Pierre Hermé, offers a range of Mother’s Day specialities on offer with heart-shaped gateaux from €34 upwards and a special range of Bonne Fête Maman macaroons.

The Jardins d’Eyrignac, Dordogne, open since May 11 following confinement has a new artisanal ice cream created for this year’s Fêtes des Mères, flavoured with rose petals from their gardens.

Artisanal chocolate makers like Vincent Guerlais, from Nantes, also rise to the challenge to find something new. His Fête des Mères range features a cinema chair made of praline and chocolate to turn mothers into a star.

Or, if you're keen on home baking, why not give these recipes a try?