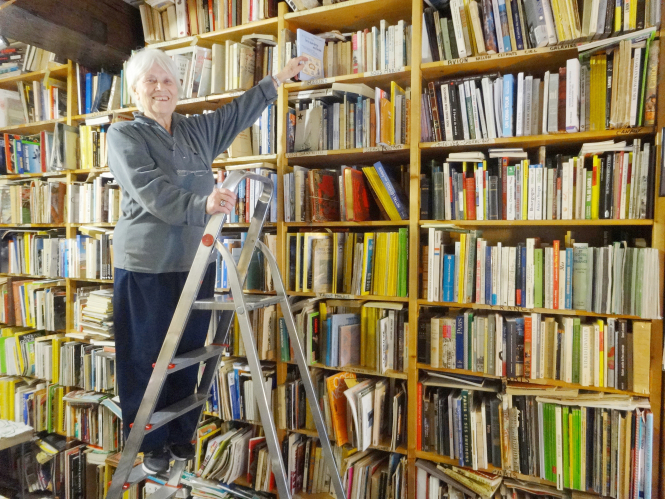 Sixty-five years after her own first “great journey” and 46 years after opening Paris’s premier travel bookshop, Ulysse, she has long earned the right to say, “There’s only one search engine here – and that’s me.”

It is not that Mrs Domain is ideologically opposed to browsing but that she wants communication: to know your interests, what brought you in, what you read, where you are going; as though it were not her shop that you were entering but her compartment on the Orient Express.

Now 76, she can clearly remember that ‘first great journey’: “I was 11 and my parents sent me to boarding school in England.”

At 17, she seized the opportunity to travel further when she won a scholarship to spend a high school year in Menlo Park, California. The experience, she said, “was so extraordinary – such a discovery, that I said to myself that I have to see the world.”

Her interest in languages and countries led her to enter an interpreting school in Geneva, but her studies soon took a backseat to her travels. She began by visiting classmates during holidays – first in Europe, then other places around the Mediterranean.

During that time, she says, her father, the director of a concrete company, “gave me my dowry. He said, ‘Above all, don’t spend it’. I did – but it took a long time. I travelled frugally. One dollar a day.”

Central America followed, then South America, Africa, Asia, and Nepal. As well as French Mrs Domain speaks English, Italian, Spanish and Arabic. “I didn’t become an interpreter but my interest in languages has served me well,” she said.

“For 10 years I travelled like that, alone or accompanied, returning to France for a month or two in summer… Then I got tired of having just a small suitcase that I called home.

“I saw older people who had never stopped travelling around the world and I didn’t find that extraordinary.”

But what would she do if she stopped? “My mother wanted me to be an executive secretary,” Mrs Domain says with a laugh.

She got a job in Paris working with an estate agency that sold chateaux but did not stay long. “This can’t be what life is all about, not for me.” So she left again for a trip around the world and somewhere “between Colombo and Surabaya” she decided to open a travel bookshop. But where exactly in Paris and called what?

“One day I walked by a little bookshop on Ile Saint-Louis called Ulysse [Ulysses], after James Joyce’s book, and I thought ‘That would be the perfect name for my shop’. It was a general bookshop, a tiny place. Through the window I saw four guys playing poker. I walked in and said, ‘That’s a cute bookshop that you have here’ and one of them said, ‘It’s for sale’.”

In 1971, Ulysse the travel bookshop was born. Catherine Domain was 30 years old. “There were bookshops at the time specialised in former colonies,” she says. “But a bookshop for travellers didn’t exist.

“This was just when charter flights were starting, so people were travelling. I began to have journalists as clients, which led to articles, first in Paris Match… I was the first, and I may be the last.”

In the late 1980s real estate prices on Ile Saint-Louis were on a steep rise as the island’s international reputation grew and it was increasingly drawing tourists, in part thanks to the appeal of Bertillon ice cream. The owners of the building wanted her out so that they could raise the rent.

So, she sued them in order to get sufficient compensation to move to a suitably central location.

It is said that good travellers are more likely than others to find serendipity and good fortune along their route. That seems to be the case with Catherine Domain. Returning from a visit to a friend in Geneva one day, she found herself sitting next to an estate agent. She told the agent her woes about having to leave her current address and the agent said, “I have just the place.”

That place turned out to be just 150m down the street from the original shop. So, in 1988, she moved Ulysse to its current address. It was the address where she first rented an apartment on Ile Saint-Louis.

In 2005, she opened a second Ulysse in Hendaye, by the Spanish border along the Basque coast.

Hendaye had been a holiday spot for her family since the 1920s and two of her sisters now spend much of the year there. Again traveller’s fortune smiled on her.

She went into an estate agency to enquire about possible shop space just as a shop in the former casino, facing the beach and the ocean, became available. She took it immediately.

Open only in summer, it is between two surfing clubs and mostly sells used books.

Wishing to root Ulysse firmly in Hendaye, Mrs Domain created in the Prix Pierre Loti literary prize in 2007, named after the French naval officer, adventurer and writer who had owned a house there and died in 1923.

Are her long-distance travel days over? “Until I opened in Hendaye I would take one or two months in summer to travel. I have a friend with a boat with whom I’d go cruising around the Pacific Islands. But I haven’t taken long trips like that since then. There are two or three places in the world where I’d still like to go, but I don’t know if I’ll do it.”

Catherine Domain’s ‘Have you a book?’  reminder to yacht crews to visit her second shop at Hendaye

There is not even the slightest hint of wistfulness in her voice. “I’m not frustrated as far as travel goes. In fact, there are lots of places where I would not go so as to not ruin my memories.

“I’ve been invited to the Galapagos, which I visited decades ago, but I wouldn’t go because you have to walk on paths. You can’t go right, you can’t go left – it’s horrible.

“And I wouldn’t go back to Kathmandu. It would ruin a memory of spending an entire winter there.”

Would she ever want to write a book about her own travels? “Writing is painful for me. It means sleepless nights. I’ve done radio. I’ve written articles for various publications, including a weekly column one year [1978] for Le Matin de Paris. But I realised I could be either a journalist or a bookshop owner, not both.”

Mrs Domain has already earned literary accolades, with the French National Order of Merit in 2012 and she received an award from the Spanish Geographical Society in 2017.

Even at 76, she has no plans to retire. “I continue to work because I like it. It’s a way of travelling while staying in the same place. Each person who enters is an adventure.”

As long as that person remembers to speak with the search engine first...

Ulysse Cargoclub has just one rule: Bring a drink

Ulysse Cargoclub is an informal gathering of travellers, readers, and dreamers that Catherine Domain created in 1993 aiming for a get-together for those interested in exchanging stories and advice on travelling on cargo ships.

It quickly evolved into a gathering of travellers and readers of all kinds and destinations, from globetrotters to urban explorers in Paris.

There are no meetings as such, rather ‘aperitif gatherings’. There are no dues to pay, and the only requirement is that attendees bring their own aperitif and plastic cups.

Heavy rain can cancel meetings but cold nights or drizzle do not. Authors, by arrangement with Mrs Domain, occasionally bring books for an informal signing.

And if no one shows up but you? “The worst that could happen is that you’d share a drink with me,” she says.