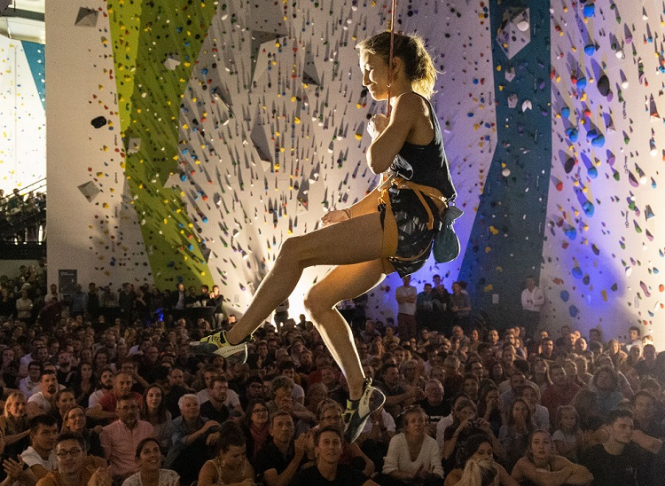 The popularity of climbing is on the up and up – and it is difficult to avoid the clichés for a sport which is definitely in the ascendance.

More and more indoor climbing centres are opening up. It is the second most requested sport in school after football, and membership of the two climbing Federations, FFCAM and FFME, has grown by 5% a year over the last 10 years. 2019 saw the first international trade fair dedicated to climbing in Lyon.

It will also, for the first time, be part of the Olympics in Tokyo this year.

The climbing sport which is attracting new fans is bouldering, or bloc in French.

It began at Fontainebleau at the end of the 19th century, where the huge number of natural boulders made it the ideal training site for Alpine climbers.

Now people come from all over the world to climb the rocks without having to face the added height of the mountains. Jean-Pierre Roudneff, editor of the website bleau.info which gives information about 30,000 different boulder challenges in 254 areas of Fontainebleau, says it is difficult to know how many people come a year, but the number of climbs registered by people on his site has grown from just over 17,000 in 2013, to nearly 50,000 this year – which indicates that more people are coming, even if one person registers several climbs in a day.

“They come,” he said, “because it is the Mecca of the bouldering world!

“There is nowhere else with such a high concentration of quality boulders to climb.”

Now this type of climbing has been reproduced in the growing number of indoor climbing sports halls which have opened across France in the last 10 years, with names like Block’out and Arkose.

The leader is Climb Up, which has 25 centres throughout the country and plans for 100 by 2025.

They were created by François Petit, a world champion alpine climber. He retired from international competitions in 2004, and decided to open up the sport he loves to urban populations who did not have the same opportunities he did, growing up in the mountains.

It has worked. Every year there are 40% more clients and 400 to 600 visitors on average to each centre every day

“It is a new sport,” he said. “City dwellers can now climb and this is a new phenomenon.

It is attractive because it is open to everyone, from beginner to accomplished climber; from three-year -olds to 80-year-olds and we have facilities for disabled climbers in each centre.

“People like it because it is a way of doing sport which is sociable. It is not like football where you need a fixed number. You can come with one, two, three or more friends, whenever you like.

“You can come as a family, with something to suit all ages. Our walls have mixed levels so everyone climbs together. People share a good moment together.”

There are two types of wall. Those with ropes, especially good for young children, and bouldering, where you climb up 4m walls and land on mattresses if you fall. Each type of climbing has different grades from yellow, easy, through to black, the most difficult.

Mr Petit said he thought the boom in indoor climbing walls would lead to more Alpine climbing, but: “There has been an increase in sales of climbing shoes and safety helmets, but a decrease of 15% in sales of ropes, which shows people are happy to stay inside, rather than moving on to climbing real rock faces.”

There will be three disciplines in the Tokyo 2020 Olympics.

Speed, where climbers race up identical routes, Bouldering where they climb as many fixed routes on a 4m wall as they can and Lead, where athletes have to climb as high as they can within six minutes.

Mr Petit says he has already seen an increase in clients due to media coverage of the new Olympic sport.