Agen prunes: How a small area of France is world renown for its plums 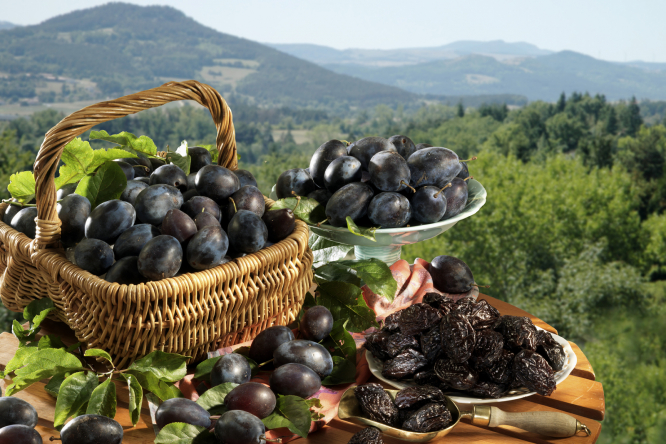 France is the third prune producer after Chile in first place and California in second Pic: Foodpictures / Shutterstock

Agen prunes are regarded as the best in the world, and have been cultivated in a small area of South West France, centring on the Lot-et-Garonne and spilling out into five other bordering departments, since the 12th century. September is a busy time for the farmers as harvesting starts in mid-August and continues into the middle of this month.

Production centres around Villeneuvesur- Lot, but they are called pruneaux d’Agen because they were originally exported from nearby Agen when it was a busy commercial port, up the Garonne to Bordeaux.

Only one variety of plums, the prune d’Ente is used for prunes (confusingly plum is prune and prune is pruneau in French).

The name Ente means grafted in old French, and was given to this variety because they were developed from trees introduced from Syria in the crusades undertaken by the Benedictine monks from Clairac Abbey in the Lot Valley and grafted onto local varieties.

They thrived in the local climate and were particularly well adapted to the process of drying which meant they could be conserved for months.

They are nutritious being rich in fibres, minerals, vitamins and calories and were perfect for long trips on boats and were always taken on board by the navy and later merchant ships. Their popularity rose massively from the 17th to the 19th centuries.

Today there are around 1,000 producers growing Ente plums to be turned into prunes, producing around 45,000 tonnes a year. The industry creates a further 20,000 jobs transforming and selling, etc., and is vital to the local economy. This is the only region where prunes are produced in France and they benefit from a protected geographical indication, PGI.

Nicolas Mortemousque is the President of the Interprofession et du Syndicat du Pruneau d’Agen and has 20 hectares of plum trees on his farm.

“I am passionate about growing plums for prunes. I also grow cereals and sunflowers, but they only have one season whereas a tree needs to be cared for over many years and farmers can develop a much closer relationship with their orchards than with their annual crops.

“The trees will begin to produce at 5-6 years with optimum production between 10 and 25 years and they will have to be replaced between 30 and 40 years.

Consumers demand quality and we are constantly researching ways of improving our fruit. For example, with increasingly scarce water supplies I have installed a very sophisticated sprinkling system which only gives the trees, which do not demand a great deal of irrigation, water when they need it.”

“Without it the trees have a tendency to alternate between good and bad years. We have to get it just right to make sure as many plums as possible will get the best advantages from light and warmth on the tree. They need protection from leaves, but if the foliage is too dense they will not get enough sun. They also need the right amount of air circulation.

Often the fruit at the centre of the tree will develop less well than those at the exterior. We are changing our ways of planting to have more trees per hectare, but cut them back more severely so they grow less tall. We have to respond to climate change, and this is because we lost so many trees, especially the bigger ones, during the storms of 1999 and 2009.”

Weather is a constant worry. This year’s late frosts were a disaster:

“At least two-thirds of our plums were wiped out. We can only expect to harvest around 10,000 tonnes this year. We have systems to beat frost, but they work for what we call white frosts which are low to the ground so we can fight them using ventilation systems which mix the warmer upper air with the lower air and reduce the damage.

“This year we had black frosts where all levels of air were much colder going down to minus 6 in some places and all we could do was see our small green plums turn black. It was soul destroying. All we can do is hope for better weather next year.”

The harvest season is underway this month, albeit with a much reduced yield:

“Our system is mechanised and involves using machines to shake the trees to release the fruit. However, we control the degree of vibration and only shake them very gently, so that only the fruit which is perfectly ripe will fall. I will pass up to 12 times through the orchard to make sure the plums are picked at just the right moment.”

He says attention to detail and the changes he is making in his orchard make a definite difference to the resulting prune and quality is their aim.

After harvesting, the fruit is washed and sorted so that only the undamaged fruit will then be dried on the farm, which takes 24 hours in giant ovens where the temperature is kept between 70 and 80° and the humidity is closely controlled.

Mi-cuits prunes are only dried over 15 to 20 hours and Mr Mortemousque thinks they are the more superior version because they are moister and have a preferable texture, but fewer are produced because they do not last as long.

France is the third prune producer after Chile in first place and California in second. At present the Syndicat du Pruneau d’Agen is negotiating with Chile to get their name protected as Mr Mortemousque says the producers are trying to emulate Agen Prunes and have named a variety of plum Agen, which leads to confusion about their origin.

“I have been to Chile and have seen they are trying to imitate us. But their plums cannot compare because their terroir and their methods are not the same. For example, the fruit develops much more quickly and so does not become as big as ours.

“They are less selective about the ripeness of their plums at harvest time and they dry them in the sun, at very high temperatures, so the resulting prune is smaller and harder. They no doubt have their own qualities, but we do not want to see them confused with our own prunes.”

He says he loves his job, where, even after centuries of cultivation, they are still constantly striving to produce better and better prunes.

The dried fruit is sold according to size in a system which is defined by two numbers representing the minimum and maximum number of fruits contained within 500g. The biggest are 33/44 and the smallest size which can obtain the PGI Pruneau d’Agen label are 66/77. Any smaller and they are sold off without the label for jams, juice and other products. The size recommended for eating alone and not in cooking are 33/44 and 44/55.

They can be kept for several months. If they begin to dry out you can refresh them by plunging them into simmering water for a few minutes and for a touch of exoticism you can add a flavoured tea, spices, or vanilla extract to the water.

Artisan soap maker: 'After six years, it still gives me a thrill’
22 October 2021
More from Work
More from Connexion
Get news, views and information from France
Join the newsletter
Subscribe to The Connexion