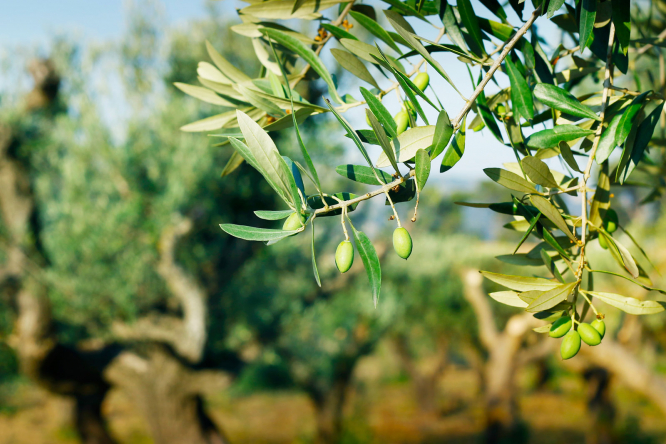 French olive oils are more expensive than many imports, mainly because they are not produced on an industrial scale, but mostly on small family farms Pic:

Olive producers in the south of France are in the middle of their harvest season, which started at the end of August and goes on to the beginning of January.

More than a hundred varieties are grown on the mainland in an area which stretches between Nice and Perpignan, Marseille and Nyons, and covers around 13 departments, plus Corsica, and each one is ready to pick at different times. Green varieties are first, and those that are best eaten riper when black, are picked later.

They are a gastronomic product, to be savoured as a dressing, rather than used in the frying pan for cooking. France’s production is small compared to other countries.

96% is imported, most of it from Spain, and some from Tunisia. For this reason, emphasis is on quality, rather than quantity. French olives have eight PDOs, Protected Designation of Origins, a very high number for such a relatively small output.

Olives have been eaten and grown in France for thousands of years, and became an important source of income from the eighteenth century onwards. By the 19th century there were 26 million olive trees on 168,000 hectares. Part of the growth was due to the use of olive oil in artisanal products such as Marseille soap and textiles.

Decline began when there was competition from cheaper grain oils and after the phylloxera crisis, there was a new demand for vine growing land. By the early 1950s, there were 8 million olive trees on 50,000 hectares. Then, disaster struck in February 1956, when temperatures of -20° followed a mild January, and destroyed two thirds of the trees.

Many farmers replanted with vines and fruit trees. The 1980s saw a small revival with renewed interest in the health advantages of olive oil and the Mediterranean diet. There are now around 5 million trees on 50,000 hectares.

One of the olive farmers who decided to keep going after the 1956 frost was Jean Bélorgey. He pruned his damaged trees extensively and planted new ones. In 1963, he got together with friends to buy an olive oil mill.

Now his grandson, Laurent Bélorgey runs the family farm, La Lieutenante, in the Vallée des Baux de Provence and is also President of France Olive, the association representing the profession.

He makes olive oils and table oils and has won the silver medal at the Paris Agricultural Fair for his Extra Virgin Olive Oil.

“We have 48 hectares with 13,000 olive trees planted gradually from generation to generation. We grow six varieties which each have a different taste and texture. The four main varieties have the Protected Designation of Origin.”

Salonenque is a very old, pear-shaped variety, and the first to be picked. They are used as table olives when green and are a local speciality, the famous Cracked Olives from the Vallée des Baux de Provence. Those that are picked later when they begin to turn mauve in November are used in their blend of olive oil adding softness and finesse.

Béruguette olives are used for an olive oil with a distinctive green colour, almond flavour and fiery nature. It is used both for olive oil and as a Cracked Olive.

Verdale des Bouches du Rhône has an elongated fruit with white spots, is resistant to cold and gives green apple aromas to its olive oil, and is used as a table olive.

Grossane, a pulpy black olive, gives an olive oil which is distinguished by its mildness and sweet almond aromas.

They also cultivate Picholine for green table olives and olive oil, and Cailletier which promotes pollination and is used for a small black table olive.

'The olive tree repays a hundredfold the care we give it'

The family motto is “the olive tree repays a hundredfold the care we give it,” and that, says Mr Bélorgey, is allyear- round.

“Aside from the harvest, the biggest job is pruning. The main period is between February and the end of April. But we may also prune just after the harvest and in the summer months we are always out with the secateurs for a cut here and there.

“We need to make sure there is always light reaching the interior of the tree. The skill is to get the right balance, getting enough light, but not cutting too many leaves and fruit bearing branches.”

30% of orchards in the region are now classified organic, and the rest is through sustainable farming where, as few pesticides and herbicides are used as possible. For the last 20 years a system is in place to alert a network of producers whenever anyone comes in contact with any disease or parasite so that sooner rather than later action means as little treatment as possible is needed.

The vast majority of the olives are used for olive oil. Around 5,000 tonnes of oil is produced a year, whilst 1,000 tonnes are sold as table olives.

'75-80% of the oils produced in France are extra virgin, which means they are the highest-quality on the market'

They come from the best olives, and the oil is extracted purely by mechanical means, with no chemical or heat treatment.

The remaining 20-25%, which does not have quite the same quality, but is also extracted purely by mechanical means, is sold as virgin olive oil.

Mr Bélorgey says one of the great advantages of buying French olive oil is the huge range of tastes and textures to choose from, due to the large number of varieties, together with different methods of production and savoir faire, depending on area.

To choose, you must first know which of the three categories of oil you prefer:

“The greenest, youngest olives make an oil with an intense flavour, fresh, with a touch of bitterness ending on a fiery note. Those called “goût à l’ancienne” are made from the ripest black olives and are softer with overtones of chocolate and tapenade. In between are the oils which are subtle, associated with dry fruit flavours. There are then the regional differences, which come into play. Each oil is unique.”

He also says you must be careful to make sure the oil comes from France. All olive oils sold in Europe must have their origin clearly labelled on the front of the container.

For oils produced within the EU, the country can only be named if the olives have been both harvested and turned into oil within that country. So if an olive oil is labelled France, you can be sure it is 100% French.

According to France Olive, any olive oil marked “Origine UE” is likely to be a mixture from different countries in the EU, usually a majority from Spain and a small percentage from Greece.

When it is marked “Origine UE et non UE” it usually indicates a mixture of Spanish and Tunisian olive oil.

French olive oils are more expensive than many imports, from €16-€30 a litre. This is because many of the varieties grown and native to France are strong in taste but are low croppers, and they are not produced on an industrial scale, but mostly on small family farms.

Laurent Bélorgey says they should not be heated to high temperatures which will destroy many of their qualities:

“They are not limited to use on salads though. They are exceptionally good added to cooked dishes at the end as a sauce on potatoes, fish or a roast, when they will release their subtle aromas and add a delicious note to a dish.”