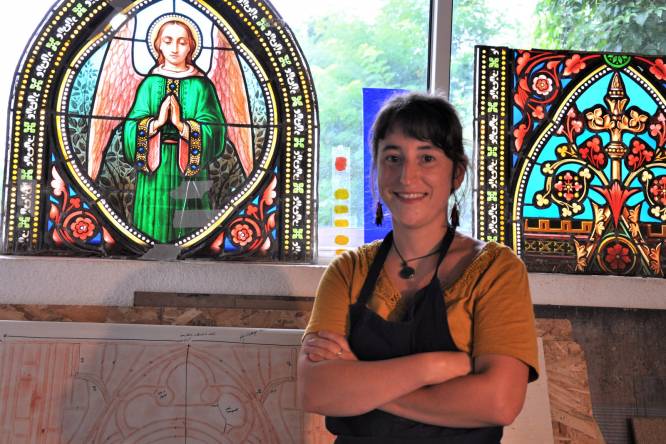 'I have often thought of giving up. But I am obstinate and I love it' Pic: Marie Maison

Audrey now has her own workshop at Lamagdelaine, Lot and for the moment plenty of work restoring windows in local churches.

Audrey was brought up in France with a French mother and British father, and her knowledge of English helped when she worked in New Zealand, shortly after the earthquake in Christchurch in 2011.

What are you working on now?

Most of my work is in restoration. I am working on the windows of the church at Concots in the Lot. They are so high and narrow, I had to employ a climber to bring them down.

They are behind the altar close to several sculptures so the only other option of putting up specialised scaffolding was out of the question, because it would have taken up the whole of the €20,000 budget I was allocated for the project.

Is there plenty of work?

Most churches have windows that need restoring. The lead should be changed every 100 years. After that it starts to deteriorate, the window warps and the glass is no longer held in place as it should be, so there are cracks and pieces which fall out.

Ideally, we need to be called in before that happens, but that is rarely the case. Many mayors would love to be able to pay for their restoration, but they just do not have the budget to do so. And the roof and walls have priority to keep the churches standing.

I am lucky to have work for the next 19 months, but work is not easy to get.

How do you go about the restoration?

Once the windows are in the workshop my priority is to save as much of the original glass as possible. Anything I replace means there will be less of the old window to show to future generations. It means that after the restoration you may still see the cracks, but the glass will have been mended using special glues that are supple when they dry and will absorb any future movement in the window.

It is slow, patient work. It takes a great deal of time to replace a piece that is so damaged it cannot be saved.

First I prepare the glass, as it is rare nowadays to find the very fine 2mm glass which was historically used in churches. Then I carefully match the colour and study the painting to use the same type of brush strokes as the artist before me.

Why did you choose to be a master glass-worker?

I studied for a fine arts degree in Toulouse, but did not know what I wanted to specialise in, until I went for an internship with a well-known stained glass artist, Jean- Dominique Fleury.

As soon as I entered his workshop it was love at first sight for this craft.

He let me stay for six weeks instead of one, and encouraged me to apply for a top qualification, at the Ecole Nationale Supérieure des Arts Appliquès et des Métiers d’Art, Olivier de Serres in Paris. But the deadline was only two weeks away so I had no time to prepare.

I was so sure I had no chance I was completely relaxed, and then incredibly surprised when I was given one of only “I was repeatedly told it was no job for a woman. Even a woman at the head of one of the workshops refused to take me on six places on the course.

Was it easy to find work afterwards?

Even with my diploma it was very difficult. The workshops wanted someone with experience. I am small, 1m60 tall and 45 kilos, and I was repeatedly told it was no job for a woman, because you have to carry heavy sheets of glass.

Even a woman at the head of one of the workshops refused to take me on because of my sex. She said she was only there because it was a family business. I left in tears. I got a job there later, but only because Jean-Dominique Fleury gave me a letter of introduction, and it made me sad that was the only way I could be accepted in my craft.

He also helped me by employing me for a while. We worked on a restoration programme at the Cathedral of Sainte-Marie in Auch, where I learnt a great deal about restoration work in practise.

How did you end up owning your own workshop?

It took a long time, with very many ups and downs.

For a while, my partner and I travelled in New Zealand and I worked for a wonderful woman, Kay in Christchurch.

It was soon after the earthquake, and she had more work than she could handle. Lots of private individuals have stained glass windows in their homes, so it kept us busy. She said I could stay on. I was tempted, but it was too far from home in France.

Back home, a Paris teacher had offered me his business, but I was disappointed when he then changed his mind. He did not think I could succeed.

In the Eighties, he had at least 75 jobs a year, but at retirement, even with a good reputation, that had dropped to 35.

How did you manage?

An uncle of mine told me I could apply for a grant from Banque Populaire. But the deadline for the Prix des Métiers d’Art was the next day. I was up into the early hours to fill in 50 detailed pages. But they gave me the money I needed.

Still there were complications, because I fell pregnant, and had to pay the rent and loans on my equipment with no income for a while, and again when my second son was born. But now I am working full time, though I make almost no money, definitely less than the minimum wage.

Why is the pay so poor?

I have to put nearly all of my money aside to pay my social charges and taxes.

Master craftsmen are in the same category as other artisans like plumbers and painter-decorators, but our overheads are far higher with specialised equipment and there is not a constant supply of work. I think we should have lower charges so we can at least make a living from our skills.

You said many people told you the work would be too physical. Is it hard?

It is hard to be told over and over again you will not be strong enough. It is dangerous working with lead. I started sweeping the dust with a broom, but I had a fright when my first baby had high levels of lead in his blood. Luckily it has not been enough to affect his health. But since then I have bought an €800 vacuum cleaner with filters and I wear a mask, even though it is cumbersome.

What has kept you going?

I have often thought of giving up. But I am obstinate and I love it.

When I have time I make my own creations, but for now I am restoring part of France’s heritage.