Meet the producer of berets worn by Rihanna to revolutionary chiefs 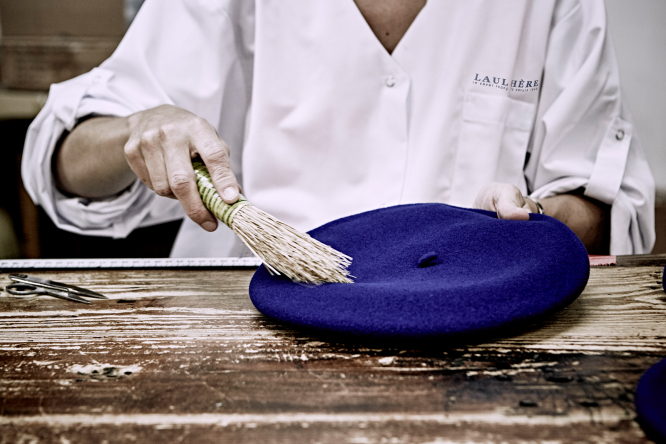 It started as functional headwear for shepherds before becoming the ultimate symbol of French chic – but the iconic beret is still being made much as it always has been.

The oldest producer, Laulhère, began selling berets in 1840 and they have been made continuously at Oloron- Sainte-Marie, near Pau, at the foot of the Pyrenees, for the past 181 years.

And it is not just catwalk fare – berets were a trademark of Cuban revolutionary Che Guevara too. Laulhère managed to verify that the last one he wore was one of theirs, and is now reproducing it for a 21st-century market, complete with the star, for €119.

The company prides itself on the quality of its berets and its know-how, which is not taught in any school but passed on from generation to generation to the 50 skilled craftsmen and women in the workshops.

No surprise, then, that the company has been awarded the label entreprise du patrimoine vivant (EPV), which is given to firms that use and preserve traditional skills.

Marketing manager Albane Forzy says the business developed in the 19th century, because the workshops were so well situated.

“Sheep were moved seasonally through the town, so the basic raw material, wool, was easily available. It was also a trading town, so there were opportunities to sell the berets, which were worn throughout the country.

Originally, berets were favoured by farmers and labourers for practical reasons: wool was warm in winter, cool in the summer and kept dry in rain.

“Later, it became appreciated for its style, and also became part of the army uniform. Today, I would say its appeal is universal. It is worn by old and young, for work or for fashion.”

Laulhère makes an average 200,000 berets a year. They take two days from raw wool to finished article. There are 10 processes involved, and a total of 20 people, in the making of each beret.

The first step is to knit the wool, which always comes from Merino sheep. This process used to be done by hand, and it was very complicated to create the beret’s round shape. Now it is mechanised, on looms designed at Laulhère.

However, it is the only stage carried out by machine – the rest is all done by hand.

Felting is also an important part of the process. It makes the beret soft, thick and water resistant, yet still breathable.

“The art is to get the stretch and resistance just right and this is a skill our craftspeople have developed over several years,” says Mrs Forzy. “It takes place at the same time as the dyeing, by putting it into water.

“We use water from the River Gave, and the minerals in the water make the material particularly soft.

“Getting the colour right is one of the most skilful steps. Pigments have to be mixed to a top-secret formula – like working on a recipe in the kitchen.”

After the berets have been dyed, two wooden semi-circles are placed inside and each beret is steamed to give the correct diameter.

The final touches take time. The beret is shaved by hand, to make it smooth, and any impurities are taken out by tweezers.

A lining, usually made from satin and called the coiffe, is sewn in place, the leather band to go around the head is added, and the signature emblem of Laulhère is attached.

Finally, the beret is groomed. If even the smallest particle of dust is found, it will be removed with tweezers. The beret is given a final clean with a vegetable fibre brush.

Nearly everyone who works at Laulhère is local to Oloron- Sainte-Marie, where the workshops are based. They go through a long apprenticeship to learn the craft and usually specialise in just one process, rather than them all.

There used to be several beret manufacturers in the town, which is in the ancient province of Béarn.

“The word beret comes from the Béarnaise dialect, and berets were originally made here,” says Mrs Forzy.

“We continue to make them using traditional methods, but for a contemporary market.”

Prices for their berets start from €39 for the basic Authentic model, going up to €999 for a haute couture one, which is inspired by cubist and surrealist artists.

“We have plenty of ideas for this enduring head cover, which for us is a completely different article of clothing to a hat. A beret is, quite simply, a beret,” says Mrs Forzy.

Exploring mountain refuges and cabins in France
19 October 2021
More from Work
More from Connexion
Get news, views and information from France
Join the newsletter
Subscribe to The Connexion