New directions: From cashier to cupcake maker in France 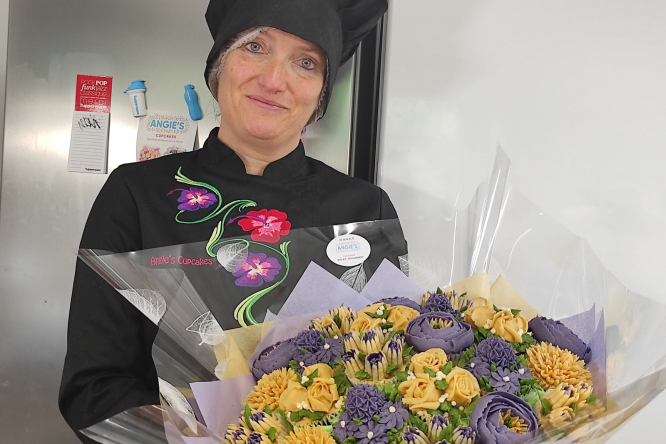 'Business is going really well – although cupcakes are not sold as widely in France as in the UK, I make beautiful cupcake bouquets which are proving quite popular' Pic: Courtesy of Angela Christophe

When I left school at 18 to work at a major bank in the UK, I had no idea I would end up moving to France within a few years.

However, in 1993, when I was 21, I came to this country briefly with work and met my future husband. I quit my job soon after and moved here permanently to be with him.

I worked a couple of part-time jobs when I first arrived, but was eventually offered a job as a bank cashier.

Going from a life lived entirely in English to being fully immersed in French was a shock. There was no internet then, and no British TV to access. Despite my fiancé’s help and being surrounded by French speakers, it took me two years to feel fully fluent.

Over the next 15 years, I continued to work at the bank but by 2009, with three children to care for, I realised I needed to find a role that fitted more neatly around family.

I decided to apply to be an assistante maternelle (childminder). To do this, I had to fill out an application form and attend a meeting, after which our home was inspected and I underwent security checks.

It was all quite straightforward, and I was able to take on two children to look after alongside my own.

This continued for 11 years. However, in 2019, once my children were older and needed me less, I decided to do something for me.

I have always been a keen baker, constantly whipping up cakes or desserts for friends, family, the neighbours, and even the binmen!

I had considered starting up a business in the past but dismissed the idea, knowing you have to be qualified to make and sell cakes in France and feeling it would all be much too complicated.

Now, knowing I wanted to do something different, I decided to investigate properly.

To my surprise, I found that rather than having to attend a class with other students, I could take a course through an organisation called Pâtissier Libre at home in my own time as a candidat libre. I would only need to go in for the written and practical exams.

This was perfect – my husband and I had separated in 2013, and I could not afford to give up work and attend a course full-time. I was able to continue with my childminding and study in my free hours.

I started the course in September 2019. Despite knowing I just wanted to sell cakes and cupcakes, I still had to learn the full range of French pâtisserie – croissants, pains au chocolat and other complicated delicacies.

Somehow, I managed to master them all – and friends and family became used to regular handouts. I confidently looked forward to my exams, which were due to take place in spring/summer 2020.

Then the pandemic struck, which put my plans on hold.

The students who had been attending their courses in person were given their diplomas, but those of us who were studying from home had our exams postponed.

This meant a frantic summer of baking – I had to keep going to make sure I did not lose any of my skill.

Finally, when things were deemed safe, my written exam took place in September, followed by the practical a month later in October.

It was daunting for me to take an exam in French, despite being fluent, but I passed and was finally awarded CAP Pâtisserie.

This was the ticket I needed to start my own business from my home in Bailly-Romainvilliers, near Paris. I registered, sending my certificate off to the chambre de métiers, and received a Siret number. I then started sourcing equipment for a professional kitchen – a requirement for anyone running a business selling cakes or other cooked goods.

Converting a room in the house to a specialist kitchen was expensive, but I managed to save a bit of money by shopping around for the components myself and then getting someone in for the installation.

Finally, I set up my website, Angie’s Cupcakes, with the help of a friend and started taking orders last October.

I am currently working fulltime hours, fulfilling orders via the internet or phone for customers to collect.

Business is going really well – although cupcakes are not sold as widely in France as in the UK, I make beautiful cupcake bouquets which are proving quite popular.

I plan to continue in my small, home-based premises for now, but have not ruled out having a shop or expanding further in the future.

food and drink
career
More from Work
More from Connexion