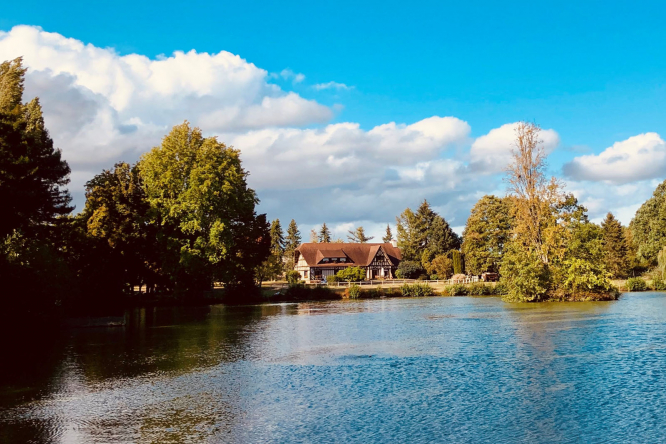 'Carp fishing is a calm, gentle, relaxing sport. You just enjoy being at the waterside, with an occasional spurt of activity' Pic: Courtesy of Lel and Jon Miller

Lel and Jon Miller fulfilled a long-standing dream when they bought a fishing lake in 2018. “It was very quick, we fell in love with this place, and moved in four months later.” Les Ravalières is situated in La Mayenne, halfway between Rennes and Le Mans. The lake, on a clay subsoil, is stream and spring fed, and contains mirror carp and common carp. It covers around three acres and is up to five feet deep in places. There are two islands and one end of the lake is dammed.

“We spent a year renovating and planned to open in May 2020,” says Lel (short for Lesley). “But the pandemic changed everything. We finally opened at the end of July 2020, but we just had a few guests before we were closed down again. How could you ever put that on a business plan? It’s put our whole business back by more than a year.”

Many lakes offer ‘drive and survive’ meaning anglers drive to the lake, set up a tent and just fish. “We wanted to appeal to families, and offer them a real holiday with fishing added on.” It helped that in the UK, Jon built scenery for theatres in London’s West End, so had lots of construction skills.

“Also, the rules and regulations about fishing lakes weren’t too bad in the end. Normally the DDT (Direction Départementale des Territoires) get involved, to ensure lakes are up to standard.”

There is no particular season for carp, although most people close their lake for part of the year for maintenance. “The rules vary according to all sorts of things, including whether your lake is closed (not connected to other waters) or private (you own the land under and around the lake but not the water itself). If you have a private lake, it’s a good idea to fence it to prevent people just wandering in and fishing in it.”

He says despite the complications, he and Lel have found the DDT very helpful and informative, and that he asks for advice before doing any large jobs. “I’d advise other people to talk to the authorities before buying a lake, because the bills could be massive... like 20,000 euros to repair the outlet or the dam when it’s not a natural lake. Very few French lakes are natural. They’re either constructed by hunters to bring the ducks down, or they are farm reservoirs.”

He says a lot of maintenance is required. They have to remove silt which filters into the lake with the water, as well as the dead leaves which fall in, and they have to remove excess weed each year. Every two years they net the lake to remove smaller species of fish which they sell on, so that their carp have more space and more food. The surrounding land also needs to be maintained.

He also says they have to control the ragondin (coypu) which breed fast and destroy dam walls and the banks of the lake. “We don’t aim to eliminate them, just keep the numbers in control. We trap them and put them down, because you’re not allowed to release them once you’ve caught them.”

“Carp fishing is a calm, gentle, relaxing sport. You just enjoy being at the waterside, with an occasional spurt of activity. Our carp can weigh up to 20-25 kilos, so when you get a bite it can be exciting. It can take half an hour to get a large fish out of the water. They don’t want to come out, so they hide at the bottom and will do anything they can to stay in the water. The idea is to get them out as gradually as possible because a living 25-kilo carp is worth about 3,000 euros. So the interest really is in fishing them without damaging them. “In the UK fish don’t grow as big as they do in France, where the summers are hotter and the lakes are warmer, so anglers who come fishing in France can double their personal best.

“Once a fish is out of the water it is inspected for minor wounds, from herons for example. First aid is administered if required, and because you can tell one carp from another by their markings, they are weighed to see how well they are all growing.”