Trout business success is off the scale in France 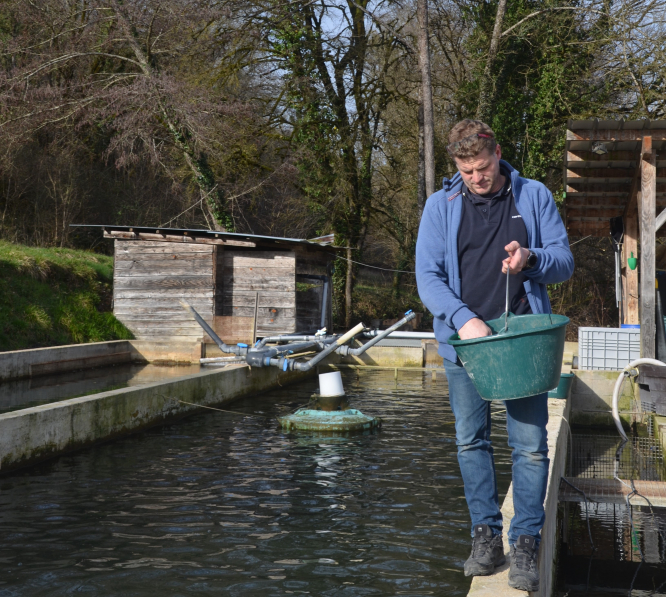 Edouard Roullet has around 200,000 fish, spread between seven basins fed by the waters of the Inval stream and local springs Pic: Les Eaux de l'Inval

Trout is becoming increasingly popular, and is one of the top five favourite fish for the table, particularly for special occasions. France is the second biggest producer of trout in Europe after Italy. Most of the farms are in Brittany and in Nouvelle Aquitaine.

There are around 400 trout farms and the majority are large scale farms or companies regrouping smaller ones. Aqualande, for example, was created in 1981 and has 41 different sites in the Landes, Pyrenees, Charente, Languedoc and Spain and produces 15,000 tonnes a year, of which 12,000 are big trout weighing in at two kilos.

Les Eaux de l’Inval at Borrèze, Dordogne, is tiny by comparison, producing 20 tonnes a year, and concentrates on producing quality fish which are raised more slowly to have a more delicate flesh and taste. Owner Edouard Roullet has won several prizes at the prestigious Paris International Agricultural Show, winning gold in 2019.

He took over the farm in 2012, after a career in the pharmaceutical industry. He was looking for a change of lifestyle and was attracted by freshwater fish. He says he learnt a great deal from the previous owner, Serge Lalba, who passed on all that he had learnt in the business:

“It is not something you can learn overnight. If you do not get everything just right, it can go wrong very quickly. At first I was tempted to overstock, but learnt that you have to balance the number of fish carefully with the amount of water you have, to make sure they are not badly affected by low water levels in the summer, or overcrowding that can quickly lead to disease.”

He has around 200,000 fish, spread between seven basins fed by the waters of the Inval stream and local springs:

“The quality of the water is all important. The advantage of the springs is that the water is at between 9°and 12°C all year round and it is always pure. The stream is also pollution free, but leaves can block the inlets and it would only need one accident with a lorry further upstream to leak diesel into the stream to poison the whole system.

“It is a delicate business. If anything happens to taint the water, all the fish could be killed within two to three hours, so it has to be watched carefully all the time. In the basins the water is constantly re-oxygenated and there are alarm systems to warn me if the electricity supply cuts off the pumps and I have generators to take over if necessary.

“In the wild, the rivers are naturally re-oxygenated by constant small waterfalls and the rest of the plant and animal life.”

He raises three varieties. Most are Rainbow trout, by far the most common in France, making up 96% in fish farms, brown trout (truite fario) and brook trout (omble de fontaine). Rainbow trout were introduced from America around 200 years ago and are more resistant to changes in temperature than other varieties and greedier, so they grow faster and reach the first weight they can be sold at, 250g, in about 14 months. However, this is even faster when fish are raised with more industrial methods, when they are fattened up to be sold at nine months. They are cheaper, but the flesh is less firm.

The other two varieties, Brown trout native to France and Brook trout from North America, take around 18 months to reach 250g. Because they take longer to develop they are more highly prized as a more delicate fish and are, as a consequence, more expensive at €16.60 a kilo for a whole fresh fish compared to €12 a kilo for a rainbow trout.

In December, the female lays her eggs and the male then fertilises them. They are put in small basins where, for the first six to eight weeks, they can develop from the nutrition already present in their eggs. At two months they are fed with a very fine powder and when they are moved into the bigger basins they are given pellets.

“Trout are carnivores and in the wild they live on small fish, insects and worms. The quality of the food we give them is important and we feed them pellets made mostly from sea fish with some non-GMO soya. It is a challenge feeding our fish not to waste precious resources by using too many young fish from the sea. At present there is research into raising insects as feed and perhaps that will be the way forward.”

Once the fish is 250g it can be sold whole. It takes between 18 months and two years for a rainbow trout to achieve the next stage at 1.5kilos – when it can be sold as a fillet – and three years until it is around three kilos, and can be cut into steaks and smoked.

Mr Roullet says there are good reasons why trout is becoming more popular:

“First, I saw a definite increase in sales of trout during confinement, which boosted rather than harmed our business. I sell in supermarkets but also in farm shops, which became popular when people had more time to spare and were willing to experiment. In particular, I saw a rise in sales of whole fish.

“Twenty years ago that was really all you could buy, but now consumers on the whole prefer to eat ready prepared food, so steaks and fillets are usually more popular. But there has been a recent return to the old ways.”

Secondly, he says shoppers increasingly prefer to buy home produced food and as there are very few salmon producers in France, trout is becoming a more popular option. There is also a difference in taste:

“Salmon is stronger, and has a higher fat content at 12% over trout at 7%. They are about the same in omega 3. A very good reason for choosing trout, as well as a finer taste, is the fact it has not travelled so far to your plate.”

As well as fillets, steaks and whole fish, Mr Roullet says there are very many other possibilities. He sells rillettes, pâté, smoked trout, and even sausages: “A friend makes duck sausages and suggested, why not, trout.

“They are 100% fish even the fat, which comes from the small amount you find on the edge of a fillet. We also sell quiches, soup and brandade and want to develop ready prepared meals as we find they are very popular.

“At present my pâtés and soup are made by another company, but I have recently rented kitchens in the local village and opened a shop as I want to expand this side of the business so that everything is totally locally grown and produced. Everything is done by hand at Les Eaux de l’Inval. For me, it has been a very rewarding career change.”

Meet the bell makers of France continuing 300 years of craft