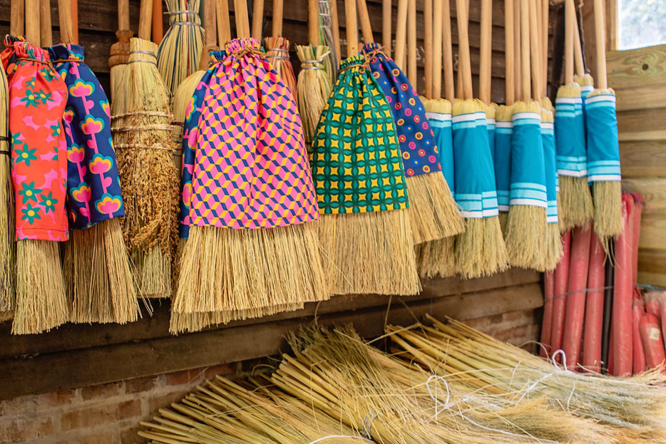 'We have clients from all over France as far away as the Côte d’Azur and Paris and even New York, where we were asked for Harry Potter-style brooms!' Pic: Courtesy of Stéphanie Dagan

Marie-Laure and Arnaud Gabriel had never worked as artisans before, and discovered this new way of life when they were in their fifties.

Tell us about your brooms

They are made out of sorghum straw, the traditional straw used for brooms because it is very strong.

None was grown in France, but this year a farmer has sown some for us 10kms from our workshop, so we will be able to have our own supply of local straw.

This will mean they will be 100% made in France, as the broom handles are made by a company in the Landes which uses local pine and carries the Entreprise du patrimoine vivant (EPV) label for using traditional methods and skills.

Our brooms are traditional in style but we have introduced a modern touch by adding colour to some of the straw – which we mix into the brooms in different ways – and by decorating the handles to produce different models. We wanted to restyle their image to make them look attractive so they are both useful and a pleasure to use and have in your home.

How did you start out on this adventure?

We have always been fascinated by old machines. We are intrigued to know how they work, their history and the craft they are associated with.

We came across pictures of a very old one used for making brooms. We found it really superb, but it was in America. After a little research we discovered a similar one which belonged to one of the last traditional broom makers in France, who was retired and lived a long way from us in the Gard, close to Nîmes.

He had been trying to sell his business for eight years but no-one was interested until we contacted him.

He agreed to sell us the machine, show us how to use it to make brooms, and to pass on all his skills.

It did not take us very long to learn, but we spent more than nine months deciding how we should set up the business, and working on our different products. Now we are at ease making them.

Were you already artisans?

No. It was a complete career change which came about when I was 52 and my husband was 57. We used to own a tool and equipment hire company for construction work in Dieppe and someone offered to buy us out.

As we were going through a slightly difficult period we took the opportunity to sell. We then started looking to see what we could do in the future. We took our time to make sure we would make the right decision.

The man who showed us how to make brooms was at the end of his career and he was no longer able to make a living from his craft, mostly because of competition from Asia.

So we had to work hard to find a way to make this traditional product modern and attractive to buyers. Our brooms are a little bit expensive, but each one takes time and care to produce.

How do you make a broom?

There are twenty steps to making one of our brooms.

First you have to de-seed the straw, using a machine. Then the straw is soaked in water to make it pliable.

We then construct what we call the soul of the broom, which makes sure it will be sturdy. It involves putting a first layer of shorter and harder straw around the broom handle.

This is when we use the machine, which we call the Monteuse, that inspired us to start out on this adventure.

It brings together the central core of the broom and attaches it firmly together with wire. We then use another machine, called the Couvreuse to add layers of natural straw and then coloured straw. We then sew the broom together. At present we do this by hand, but we have found an old broom sewing machine which dates from 1949 which we are restoring so we will be able to use it for this stage. “There are twenty steps to making a broom. Each one contains a minimum of 1.4kilos of straw.

We then pass it through another machine to take out the last seeds and to flatten it. It is then trimmed so that it is flat at the bottom. Our brooms contain a minimum of 1.4kilos of straw, which is a lot more than one from a supermarket and they will stand upright without a support. It takes an hour and a half to make one broom.

They are made to last, and if you look after them you should be able to keep on using them for twenty years or so. My husband makes the brooms with handles and I make the hand brooms and work on the marketing side to make sure we can sell our products and develop new ranges.

You have not been on the market for long. Is the public interested in buying traditional brooms?

We are very happy with the way it is going and we have sold more brooms than we expected.

We have been featured on the television and had several positive comments from viewers who said our brooms are the type of local, well-made broom they would like to have. And it also brought memories back for people who remembered this type of broom in their grandparents’ homes years ago.

We have clients from all over France as far away as the Côte d’Azur and Paris and even New York, where we were asked for Harry Potter-style brooms!

Eventually we would like to sell over the Channel too. We have one particular collection of brooms which has a special link to the UK.

They were made by an English craftsman, John Carr, who made walking sticks in the way he had learnt from his father.

Towards the end of his life he was ill, but continued to make them at home and told a friend they could be sold after his death. When they were put up for sale a few years ago, no-one was interested.

We discovered them and fell in love with them, because each one is unique and we were able to buy his collection of 600 magnificent walking sticks.

The person selling them thought it was wonderful we could give them a new life.

When did traditional brooms start to disappear in homes?

They were used at the beginning of the 19th century, and started to disappear in the 1970s when hoovers were used more widely and there were cheap imports.

Are they as efficient as a modern broom?

I think they are more efficient because they retain the dust in the straw, rather than dispersing it like a modern brush which pushes the dirt along the floor.

We also make dustpans in wood and in leather. I hope that because they are coloured and bright and cheerful they will make doing the housework a more pleasurable experience.

Are you happy with your career change?

We love making the brooms.

It is a pleasure to make beautiful objects, and it is creative choosing the different colours, deciding on the form of brooms and their decoration.

We also like the marketing side, finding shops to stock them and attracting clients. We are also very proud to keep a dying tradition alive.

The man who first sold us the machine when we started says he is delighted we have managed to bring his skills and this old tradition back to life.