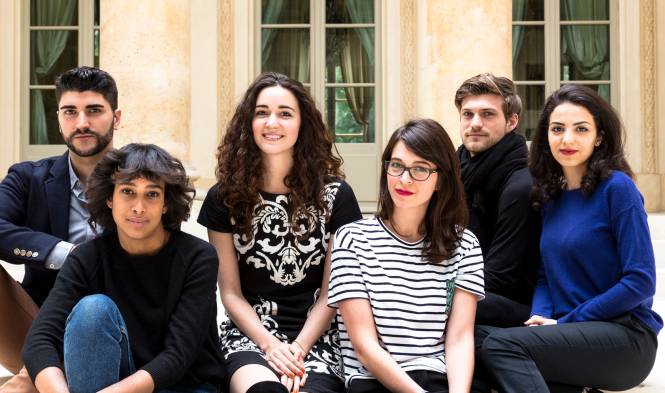 At just 31, Roxanne Varza has possibly one of the most exciting jobs in France: she is leading the team working to open Station F, a brand new multi-million euro start-up incubator in Paris.

The brainchild of Xavier Niel, the founder of telecoms giant Free, Station F will be home to around 1,000 start-ups. Construction began in October 2014 and Ms Varza joined as director in 2015.

Being both young and a woman would have stopped her from the vast bulk of senior positions in French business but Mr Niel spotted her potential and hired her to lead the team on the €250million project to transform the former Halle Freyssinet freight depot into a ‘campus’ for business start-ups – which are themselves transforming business life in the capital.

As the gender equality law comes into force in boardrooms, she has already seen first-hand the ‘old’ business culture and, having been born in Palo Alto, California, knows the differences between the countries.

She is former editor-in-chief of TechCrunch France and set up a business blog on global start-up and investment news, before founding European technology newsletter tech.eu and then the StartHer association which encourages and supports women in tech.

An associate producer at the FailCon conferences teaching entrepreneurs how to learn from failure, she was also the director of Microsoft Ventures in Paris, which again encour­ages start-ups.

Ms Varza loves France and especially loves living in Paris. “It was definitely one of my goals,” she said.

As part of her UCLA French Liter­ature degree she studied for a year in Bordeaux in 2005-2006. “I just fell in love with the place, but I didn’t have a plan or any idea of how I could live in France and make it work.”
She got a job with Business France in San Francisco, advising Silicon Valley companies how to set up in France, and after the 9/11 attacks, moved to Paris to study for a double masters at Sciences Po Paris and the London School of Economics (in international business and international economics respectively).

“In Paris I discovered a young start-up ecosystem just beginning to come into its own. The more I got involved in startups, the more inspired I became and the more I wanted to work and live here.”

She admits, however, the business culture in France is very different from that in the US. “There have been enormous changes over the last seven years, on both sides of the Atlantic, but I find the French much less ‘sales-y’ than Amer­icans, they seem to have a bit of a complex with business – although this is changing. Even now, being super ambitious, wanting to make money, being CEO of a company is still somewhat looked down upon, culturally-speaking.”

Nothing daunts her however, and she is confident Station F will be a massive success. The 34,000m2 site includes a residential hall and the re-vamped Halle Freyssinet, beside the Gare d’Austerlitz, measures 310m by 58m [as long as the Eiffel Tower is high].

The Share Zone will have a 370-seat auditorium, a fab-lab with 3D printers, wood and metal workshops, a pop-up shop, event spaces, partners’ offices, and on-site services for start-ups. It will enable members to work, meet and attend events.

The Create Zone will contain more than 3,000 desks for the members/entrepreneurs, where they can work and build new companies.

The Chill Zone will be open to the public as well as Station F members, with 4,000m2 of socialising space with four restaurants, and a 24-hour bar.

In a nod to the building’s history, two freight wagons are being refurbished to serve as event spaces.

The project is so wide-ranging Ms Varza prefers to call it a campus rather than an incubator. “When people talk about an incubator they’re thinking of just one specific programme, but we will have a lot more than that, so we think ‘campus’ reflects what we’re doing more accurately.”

Accommodation for 600 Station F members is also being built in Ivry-sur-Seine to allow entrepreneurs from all over the world to make it an international campus.

Ms Varza herself has an international background, her parents having moved from Iran to the US in 1979. Her father studied at Stanford and is an IT engineer, while her mother teaches English as a foreign language.

“In the Parisian start-up and tech world, things are changing and are improving a lot. I also think the French start-up community looks to the US for business practices.

“So today I feel there is less of a difference between France and the US than there was a few years ago.”

Those keen to join Station F for three to six months should fill in the form at stationf.co/fr and answer three questions: Have you got a really good idea? Do you want to join the world’s biggest business incubator? and Do you long to work in Paris?

Having answered, they are invited to submit a brief outline of their idea, their team and where their project has got to so far. Prices, at €195 per desk per month, are in line with other incubators in Paris.
Station F is a huge undertaking, but Ms Varza is not daunted and thrives on hard work.

She loves not just Paris but the whole of France. “It’s difficult to say which are my favourite areas outside Paris! There are so many places I love.

“I adore Corsica, although I don’t get to visit it often enough. Of course, I’ll always have a soft spot for Bordeaux, the first city that I knew in France, and I’ve loved a lot of the cities I’ve travelled to: Lyon, Grenoble, Marseille, Aix-en-Provence, Stras­bourg, Lille, Nantes. But I also love smaller towns, and France has a lot of very beautiful rural places.”

Its tech ecosystem, she says, is often diffuse and decentralised. So Station F aims to provide a hub, where they are more visible, more centralised, a place where France’s flourishing start-up ecosystem and ambitious entrepreneurs can meet, greet and get ideas off the ground.

She says she aims to put entre­preneurship at the centre of the French economy.

For herself, she says that apart from her friends and family, she doesn’t actually miss much from the US.

“I know that can sound a bit odd!

I miss certain places, I guess, places I love in San Francisco or the Bay Area.

“And I sometimes miss the variety of Asian restaurants in the Bay Area – but I’m discovering some great Asian neighbourhoods in Paris.

“I guess I do also sometimes miss how Americans will just randomly talk to anyone! There’s no taboo with talking to strangers like there is in France. In France if you talk to a stranger they think you’re mad.”

She says the best things about France have changed as she has lived here. “When I was a student, I just loved living in a new country – having to learn a new language and culture, I felt like I was constantly challenged.

“But now that I feel much more at home, I realise I actually really love French values and how people socialise. It’s very different from in the US.

“Here there is no problem disagreeing with someone about politics or religion, in fact it usually leads to fun debates and a very healthy friendship!

“I also think the French have a healthier approach to their work and life balance. People have an extremely high regard for education and intellect and certain elements of their culture and society feel more human than in the US. I love that because I didn’t always feel it was the case when I lived there.”

Getting Station F off the ground with a team of just nine people would be a daunting task to anyone else, but she is confident of its success.

She is also happy to envisage her future in France. “I really wouldn’t change anything about it. The elitist system can sometimes get annoying, and it’s easy to feel like an outsider but, actually, in the tech start-up world, much less so. I feel I have found my place here in Paris.”

In the meantime, she is travelling around Europe talking to start-ups and entrepreneurs, attending conferences and showing politicians, including London mayor Sadiq Khan, Station F as it nears completion.
It aims to open its doors before spring and welcomes all ideas, especially anything quirky or even decidedly wacky. As Roxanne says, “Station F loves surprises”.