Sea walks in France: sport for body and soul 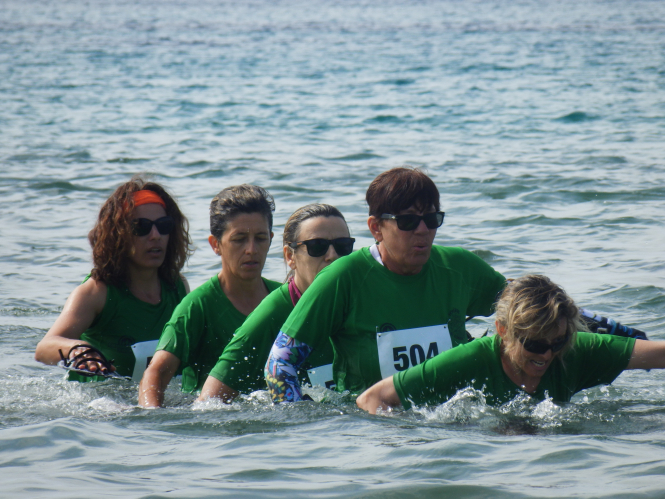 You may not have heard of the coastal ‘sport’ of Longe-Côte, but you will find more than 100 clubs dotted across French resorts by the North Sea, English Channel, Atlantic and the Mediterranean.

It consists of walking in the sea with the water coming up to a level between the hips and sternum.

It is practised all year round, even in the north, with wetsuits in winter, and has evolved to become both an amateur pursuit and a competitive sport which saw the 5th Championnat de France de Longe-Côte in June.

The sport was invented by Thomas Wallyn, in 2004, for extra cardio and muscle training for his rowing club at Bray Dunes, in the Nord department.
Two years later his idea was taken up by others, clubs developed, and gradually spread around the coast.

Mr Wallyn’s sister, Odile, opened a club at Hyères in the Var in 2010. Now there are clubs at Cannes, Antibes, Sète, Sanary-sur-Mer and Marseille among others.

The Fédération Française de la Randonnée Pédestre was called in and they made the sport official and introduced the first competition.

Dominique Biscaras is President and trainer of the Hyères Longe-Côte club.

He took up the sport five years ago when he retired: “It is a sport which is really popular.

“First it had a bit of a troisième âge reputation, but we are getting more and more younger members. Our ages range from 12 to 84 years old. There are those who do it on an amateur basis and out of our 160 members, 60 enter competitions.”

He says it is a physical sport, but the advantage is there is no pressure on the body, so far less risk of injury: “It is a great pleasure to be in the water and in such a beautiful setting.

“There is a fantastic ambience in the club. There are seven training sessions a week and afterwards we always have a drink and a chat together.”

Mr Biscaras said there are plans to extend the sport to inland lakes in the future.

At Brest, Finistère, Karine Mengouchi, who runs a fitness centre including classes in zumba, pilates, step and trampoline, introduced a longe-côte gym class in  2010: “I was the first to start in this area, but now it is quite common to see a group of people in wetsuits exercising in the water.

“It is getting more and more popular. In my classes around 100 are signed up and many love it so much they come back year after year.”

Most participants are women aged between 40 and 60 and she says it is different from any other discipline: “It is a real pleasure to be out in the open air and no two sessions are ever the same.

“It might be high or low tide. There may be waves or it may be calm. It might be sunny or raining, cold or warm. We wear full wetsuits all year, so no-one gets cold and we are always outside.”

She says it is perfect for anyone who does not feel fit enough to take part in a regular gym class because the water supports you: “It is physical. We do lots of exercises and a lot of walking in the water and it is great for losing weight.

“All the women say it makes them feel generally much healthier and they catch fewer colds in the winter, because they are doing an outdoor activity all year round. They say they feel fantastic when they come out of the water.”

2 days ago
5
Will France extend date to apply for Britons' Brexit cards?