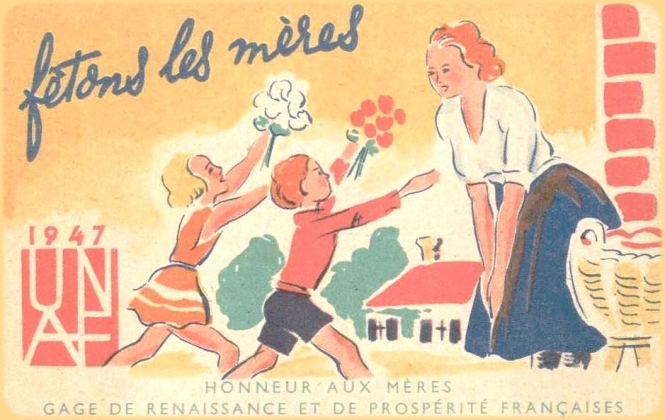 A brief history of Mother's Day in France

Contrary to popular belief, la Fête des Mères was not invented by Maréchal Pétain. The real story of Mother's Day in France begins in a small village called Artas, in Isère, when a school teacher called Prosper Roche wanted to find some way to recognise the contributions of mothers in his village. He helped organise what's thought to be the first-ever ceremony to celebrate mothers in France in 1906.

Read more: Mother’s Day – How it is celebrated in France

However, it wasn't until after World War I when communes across the country were encouraged to hold ceremonies and offer prizes to the mothers in their community. It was then during the Vichy régime when Pétain championed women who stayed at home to look after their families as a way to encourage women to have more children, giving rise to the theory that the general created fête des mères. Several years later, in 1950, Mother’s Day in France was made official.

'Happy Mother's Day' is commonly expressed as 'Bonne Fête des Mères'. But did you know that there is a whole host of French phrases related to mothers and motherhood? Here's a pick of our favourites to impress your own dear maman with this Sunday.

A mother who is very protective of her children and fusses over them, very similar to the English expression 'mother hen'. You can also say papa poule ('father hen') for a protective father.

An expression said about a mother who faces difficulties but is always very brave. It comes from the play by German author Bertolt Brecht, Mother Courage and Her Children.

This means the daughter and the mother have similar personality traits. The expression finds its origin in the Old Testament. You can also say tel père tel fils ('like father like son').

This is a colloquial word which emphasises the fact that the mother is the chief of the family. You can also say daron for 'father' or mes darons for 'my parents'. The expression is mainly used by young people, although the word has been around since the 13th century when it denoted a small castle. The meaning then evolved through the centuries to mean the chief of the house and the boss.

Read more: French colloquialisms: What does it mean to ‘tell salads’ in French?

This means to make something work easily. It is a metaphor for something that works as well as sexual relations between a mother and a father. How French!

Although these two expressions are quite similar they do not have the same meaning. If someone is a fils à maman, it means he is very close to his mother, much like a 'mummy's boy' in English. If someone is described as a fils à papa, he comes from a wealthy family and does not have to struggle financially due to his parents’ social status.

This means 'to go to a pawnbroker'. The expression comes from the 18th century when the son of King Louis Philippe, François d’Orléans, told his mother he left his watch at his aunt’s place when he had actually sold it at the pawnbroker to pay off a gambling debt.

Literally translated as to 'push granny in the nettles', this means to exaggerate, the idea being that shoving an old lady into a bunch of nettles is probably a step too far.

This means you should behave and mind your manners. The origin of the expression is not officially established but we can speculate that you act very casually when you're at your grandmother’s, but you shouldn't behave in the same way elsewhere.

The French equivalent of 'patience is a virtue' seems to suggest that patience is at the origin of all virtuous behaviour. It's definitely a virtue that's come in handy during confinement!

Much like no. 10 above, this expression implies that ignorance is the worst affliction a person or society can suffer from. It's generally attributed to the 15th-century satirist Francois Rabelais, from his posthumous work Le Cinquième Livre.

This is used to describe a doting parent who can't say no to their children. You'll also hear the expression papa-gâteau which can have the same meaning but is used more nowadays to mean a 'sugar daddy' or wealthy man who pays a - typically younger - woman or man for companionship.

The Connexion June 2020 Edition Out Now!

Our latest issue of The Connexion is out now and available in print and digital format. Find out more about what's inside on our Latest Edition page.