Why the English language is more French than French 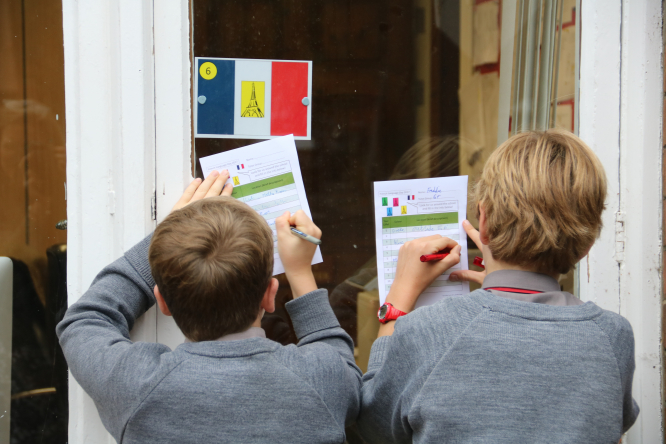 School children in the UK mark French Language Day on March 20, 2017. English has adopted tens of thousands of French words over the years.
By Selma Daddi

Did you know there are about 25,000 French words in English and that in many cases it is on the British side of the Channel that the original Gallic language is spoken?

It is easily possible to make an English sentence using only French words, according to Franco-British lawyer Anthony Lacoudre, who has written a book on the subject called L’incroyable histoire des mots français en anglais (The incredible story of French words in English).

Mr Lacoudre started to see French words everywhere when he moved to New York 15 years ago.

With the help of an etymological dictionary, he quickly realised that one word out of two was from the French language.

Mr Lacoudre said: “No living language has been so imbued with another and this responds to extraordinary historical events. There are thousands of French words in German too but clearly English has been the most influenced.”

It started when William the Conqueror invaded England and became the nation’s first French Norman king. French became the official language but people, notably farmers and the illiterate, continued to speak Old English. French was seen as the language of the elite but the “foreign” words were slowly adopted by the people.

About 10,000 words were added to English from 1066 until 1485. Then, during the Renaissance, although French kings were no longer governing, the elite continued to be fascinated by French and it became the language of court. At this time, 12,000 other French words were introduced into English – examples include age, art, cardinal, crime, dragon, prison, miracle and silence.

There are four categories of French words in English: words which keep their “Frenchness” and are used for style (rendezvous, fiancé, déjà vu, faux pas, cul-de-sac, etc); words with the same spelling (architecture, information, adorable, possible, communication, danger, question); words that have been modified (blue, please, allow, mute, vehicle, opportunity); and words that are no longer used in France (bucket, factory, garbage).

About 300 words are “false friends” and have different meanings in English and French. Examples include college, habit, rest, and deception.
“False friends often come from old French – the meaning has changed in French but the English have kept the old meaning,” said Mr Lacoudre.

“British people speak French without even being aware of it but they speak a more authentic French than the French themselves.”

Norman words also became part of the English language in the Middle Ages. Normans would call a panier a bascat, which is a basket in English. A beverage was also the Norman way to say a drink.

The accent in Normandy was different too and this has influenced the English. The letter “G” was pronounced “W”, so guerrier became warrior.

“Today the contrary is happening, as English words are being introduced into French. There are around 500 English words now in the French language – such as gentleman, bar, and tunnel.”