Cookie Consent by FreePrivacyPolicy.com A leader, a healer, a lifetime friend: could you keep a donkey? French News and Views in English | The Connexion
15 may 2021
Classifieds Currency exchange Newsletter
Login Register BASKET
Facebook Twitter

A leader, a healer, a lifetime friend: could you keep a donkey? 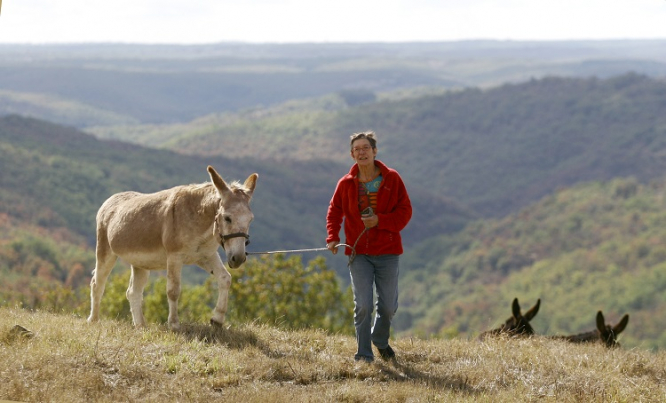 Despite donkeys being pack animals, Martine Jouclas says they will not simply follow the pack leader
By Samantha David

They have minds of their own, a rare intelligence and a need for affection and contact that belies their biting, kicking reputation.

Importantly, although they are members of the horse family they are very unlike horses.

Martine Jouclas, the founder of UNAP, an association for donkey professionals, has been working with donkeys since the 80s and was one of the first to set up walking holidays with donkeys and said: “Unlike herds of wilds horses, which are constantly on the move to find new grazing, donkeys are territorial. They tend to stay in one place and will defend their territory quite aggressively, if needed.

“Horses live in hierarchical groups, but donkeys depend on being in a group to survive so co-operate with each other.

“Training a donkey is very different from training a horse: something like the difference between training a cat and a dog.

“The dog will obey the pack leader, but the cat will only go along with another cat if it think it’s a good idea.

“You cannot present yourself to a donkey as the pack leader, but only as an equal with good ideas.

“Horses have much less efficient digestive systems than donkeys,
which can survive very well on next to nothing. In fact, overfeeding can be catastrophically bad for a donkey, leading to problems including laminitis, diabetes, heart disease and obesity.

“As a result, when training, it is far better to reward them with caresses and company than with food.”

Caresses and company are what are on offer at ADADA, which runs one of France’s largest donkey sanctuaries, in the Puy-de-Dôme department. Marinette Panabière, association president, said donkeys can live for up to 40 years and can outlive their owners’ ability to care for them.

“Increasingly, donkeys come to us because their owners don’t have the money to keep them, they become unemployed, ill or too old to cope, or even in some cases, die.”

It currently has 325 donkeys, around 100 of which are awaiting adoption, and looks after donkeys until they are recovered and back in good physical and mental health. Then, when their papers are in order, re-homes them.

“If they have chronic diseases, or are too old or fragile, we keep them here for the rest of their lives.”

Adoptions are only made to homes which have been approved after a visit, and for each one a contract is drawn up stipulating that the donkey cannot be sold on. If for any reason the new owners cannot keep it, they must return it to ADADA.

“We charge €450 for an adopted donkey, which isn’t much when you consider that on average we spend €2,000 on every donkey that comes through our gates.”

The association has around 1,000 members (subscriptions start at €47 per year) and is always looking for new members, volunteers and fund-raisers.

It has 36 fields to maintain, the most far-flung of which are 26km from the refuge buildings.

That means many miles of fences, plus multiple animal shelters and water-troughs to keep in good condition, as well as hundreds of donkeys to look after.

To find out more about what is involved in looking after a donkey, the monthly magazine, Les Cahiers de l’Âne (www.lescahiersdelane.com) is one of the top resources. It gives France-specific information you will not find easily elsewhere and reading it is a great way to learn a lot of donkey-related French vocabulary.

'When he stopped for a break, we did too'

MEET Pistache: this is the donkey that Lena Roche and four Lyon friends, went walking with in the Cévennes last Easter. Ms Roche said: “Having the donkey changed everything. He set the pace, and it was quite slow.

“So instead of us trying to keep up with the fastest walker, we had to walk with Pistache. When he decided to stop for a break, we just stopped too. It made it very relaxing.”

They all settled into holiday mode quicker under his influence, she said, and because the entire week was organised ahead, they did not have to think about where we were going, where they would sleep, or what to eat.

“We got the map, Pistache knew the route anyway, and everything was provided, including picnics. It was very easy. Much better than just hiking round the mountains on our own, wondering where to buy lunch and arguing about where to stay at night!”

And because a donkey cannot carry unlimited luggage, they only took necessities. “We didn’t bother with frocks and make-up, which again, made it very relaxing!”

Stevenson blazed with a new trail

WHEN Robert Louis Stevenson wrote Travels with a Donkey in the Cévennes in 1879, telling of walking the mountains with a grumpy female donkey called Modestine, it was one of the first descriptions of hiking and camping as a leisure activity. He said: “I travel for travel’s sake.”

The book is a must read for donkey-lovers and today, like Lena Roche and friends above, you can go on walking holidays with donkeys all over France. The donkey carries luggage, waterproofs, food and water, maps, binoculars – and small children and dogs, too, if they get tired – leaving adults free to enjoy the hike without having to wear a rucksack. Do it for a day, or anything up to a fortnight with a set itinerary of overnight stops which can cater for a donkey’s needs. See the Stevenson Association’s site in English at www.chemin-stevenson.org/en if you would like to follow Stevenson’s trail, with or without a donkey.

One way to make a difference with autistic children

Guillaume Verriez has been an animal therapist for 20 years and runs La Ferme Bigourd’âne in the Pyrénées. He has eight donkeys and works with children and adults in difficulty; with mental illness, emotional difficulties, behavioural problems resulting from a chaotic family background, and people with autism.

Working with people either individually or in groups of two to three, sessions usually last just half a day. “We tailor sessions to each individual’s needs. For example when an autistic child feeds straw to a donkey, that child has looked outside themselves and related to another living being.

“Other times, people just stroke the donkeys, or groom them, or take them for a walk. It varies from person to person.

“Sometimes it takes time for people to work up the courage to get near a donkey. They start with our chickens, then the goats, and then finally they can approach the donkeys.”

He says donkeys are ideal for the work because they are so close to humans and are so affectionate. “Donkeys are always seeking affection, wanting to get to know people. They are only interested in relationships, they won’t just blindly obey someone they don’t know.”

He says children recognise the donkeys’ different personalities and identify with them.

“Getting to know the donkeys gives them a fresh view of themselves. They stabilise children with chaotic family lives, because the donkey makes them think about who they are and how they behave.”

Some of the most profound changes happen without a word being spoken. “I let my team do their work. They don’t talk, they don’t judge, they don’t lie. They are completely authentic in their relationships. And that rubs off on the people around them.”

She said: “I have always had donkeys. They’re ideal because they aren’t at all frightened of people, and since they are smaller and more accessible than a horse, people aren’t frightened of them.”

Donkeys really want to communicate with humans, she says. They love being stroked, and don’t judge or reject people. Donkeys accept people as they are, they’re just interested in communication.

“Donkeys think a lot, they figure things out, they like to know how people tick. And when a person works out how a donkey thinks, they often understand how people think too.

“Spending time with a donkey externalises our experiences to help us understand
ourselves.”

She works extensively with children and adults on the autistic spectrum. Sessions are tailored for each person and start with talking to the donkey, grooming it, walking with it, and discussing how the donkey feels.

“For autistic troubles donkeys can be very helpful. They start the conversation by nudging someone’s hand, inspecting their pockets, demanding a response from them.”

Shouts or sudden movements can surprise a donkey but they remember afterwards and take it in their stride.

“We always set out what we want to achieve: increased motor skills, communication, vocalising emotions, trying to remember the donkey’s grooming routine, for example. This therapy can calm people, make them see themselves in a mirror, help them understand how their actions affect others.

“And we always finish on a high note, a success. The person has understood the donkey’s behaviour, grooming routine or perhaps has walked the donkey on a leading rope.”