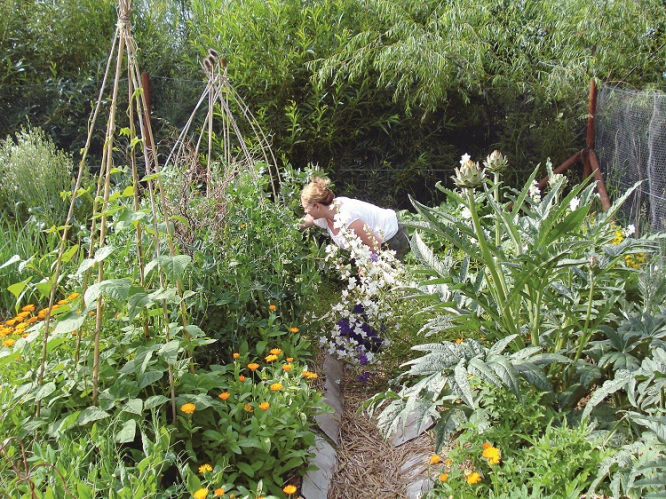 Gabrielle tends to the peas and haricots in the potager; Inset: toilet humour with an eco aim
By Jane Hanks

Fifteen years ago Stuart and Gabrielle Anderson left an urban lifestyle in Brighton, Sussex and set off across the Channel to seek the good life by setting up a permaculture smallholding near to the village of St Maden, Côtes-d’Armor, Brittany.

They have a hectare of land where they grow herbs, vegetables, fruits and nuts, and have another 4.5 hectares of woodland.

Over the years they have had different livestock including pigs for ten years and at present have chickens, runner ducks, sheep and bees.

They also have two gîtes that they rent out, and are building their own eco-house.

They have become fully integrated in the local community, have recently acquired French nationality and Stuart Anderson has written a book, Splendeurs et Misères d’un Permaculteur published by Terre Vivante, in French.

It describes in an honest way the ups and downs of developing their smallholding, and in particular, what the term, permaculture means to him.

“Permaculture has been part of the English language since the 1980s but very little has been written or translated into French and I have been told that it has only really become a known concept here in the past ten years.

Now there is a real flush of interest and many people want to learn about it.”

“There are many misconceptions. One French lady who came to stay in our gîte proudly announced she had a permaculture garden because she had a raised bed which she constructed with cardboard and a mulch of straw.

“But it goes much deeper than that. It is about observing how nature works in your garden and using that to get the most out of your land. It is also about developing systems where everything you introduce on your land has a purpose and creating beneficial relations between different elements.”

A good example, he says is a forest garden: “Take a small piece of woodland surrounded by a cultivated field where the farmer ploughs, fertilises, plants, sprays with herbicides and pesticides, before harvesting a crop.

Meanwhile the woodland is quietly growing without any intervention, and we can learn from it in creating an edible woodland, a forest garden, to produce our food in a more natural way.

It still has to be managed, because you have to make sure that when it is mature it will not produce a leaf canopy cutting out all the light, but you can apply the same principles.”

Planning is important in permaculture and the couple spent hours researching what they wanted to plant before mapping out their forest garden area with different colours and sizes of circle to represent different shrubs and trees at maturity.

However, it is not easy to get it right first time: “We were disappointed when some saplings died, thus realising that the cold winter winds had done for them, and we should have grown a windbreak first.

Now we have, but I still laugh to myself when I feel that wind, which I’m now very aware of, but hadn’t noticed before.”

In the forest garden he has planted a Judas tree between two cherry trees: “It is not only beautiful, but fixes nitrogen which will make the cherry trees stronger, a good example of creating beneficial relationships. This year we have had our first wonderful crop of peaches. Imagine that. Peaches in Brittany.”

Before France, Stuart Anderson had a couple of health issues, which led him to change direction. He had left school at eighteen and after working in London for 20 years decided to do a degree at Sussex University in his thirties.

It was also about the same time Hugh Fearnley-Whittingstall’s River Cottage television series began. “I knew that was how I would like to live and so as well as my academic studies I went to do a permaculture course with Patrick Whitefield, one of the pioneers in the UK. He was a humble man who had learnt from years of experience and he has been one of my strongest influences.”

One of Stuart and Gabrielle Anderson’s proudest achievements, which truly demonstrates permaculture living is the dry toilet system they have installed in their house.

There are two reception tanks side by side, above which is a toilet seat in the bathroom, which changes from tank to tank each year, allowing the other tank to mature into compost.

Straw and sawdust, the carbon material needed for decomposition is not added in the bathroom, but through an outside small door every two or three days.

After a year’s use and a year to compost, the tank is emptied and other compost material added and it is left in the garden under a tarpaulin for a further year to mature.

Their first results have been sent to a laboratory and have shown they have produced a perfect fertiliser and compost safe to use in their garden.

There is also a system which divides solid matter from urine, which joins the other grey waste from wash basins and showers, and Stuart Anderson has built a filter system which drains this water into a pond he has built: “This is a wonderful place for biodiversity and we now have frogs and even a kingfisher which comes to visit.

Floating oxygenating plants absorb any excess nitrogen. These get collected and added to the compost heap, effectively harvesting nutrients from our waste water which return to our vegetable garden.”

There is so much more to tell. How the couple have learnt to manage their woodland and after cutting down trees experimented successfully with growing oyster mushrooms in the stumps, bee-keeping, raising pigs for meat, learning how to preserve the food that is produced, keeping hens, introducing runner ducks to control the slug and snail population.

They love the variety of the lifestyle they have chosen: “I am proud to be a ‘Jack of all trades and master of none, but oft times better than master of one’. I am now nearing sixty and looking forward to scaling down with the aim of really concentrating efforts in a smaller area and really getting to know it.

“When I was younger I did voyage far on holiday, but now I am happy to stay in Brittany. There is so much to explore on our own land from the tiniest of insects, to the wild boar in our woods.”

His book is not a manual on how to create your own permaculture garden; “I really am not preaching to anyone, not telling anybody else what they should be doing, just recounting the evolution of my own awareness and thinking, regarding the state of the world and how I might reduce my own ecological footprint.”

You can buy Stuart’s book, in French, at boutique.terrevivante.org, priced €23.

He is looking into the possibility of an English version in the future.