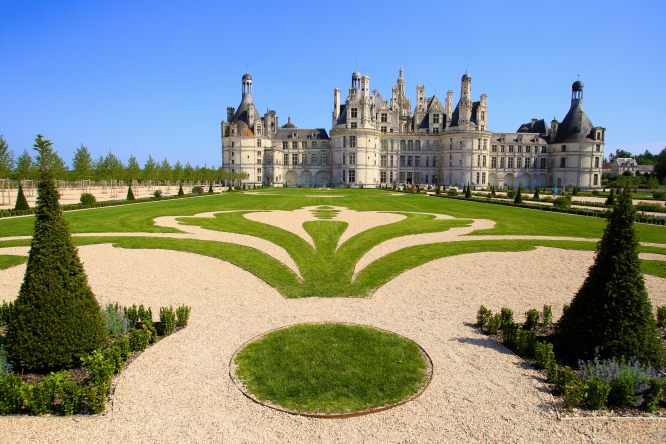 This year the Château de Chambord in the Loir-et-Cher has seen record numbers of visitors who have come flocking to see the results of the restoration of a garden on a massive scale. In August alone there were nearly 170,000 visitors, an increase of 20% compared to the previous year. The chateau hopes to have hit the million mark by the end of 2017.

The aim was to reinstate the jardins à la française, which had graced the garden for two centuries before changes in ownership, world wars, economic conditions and a decline in interest in gardens reduced the area to grass and paths in the 1970s. But now that gardens are back in fashion the State, which owns the chateau, agreed it was time to restore the land around the magnificent Château de Chambord to its former glory.

This involved a 6.5 hectare area at the foot of the north and east faces of the chateau. It was the biggest garden restoration in 20 years in France and involved 600 trees, 800 bushes, 200 roses, more than 14,000 border plants and nearly 19,000m² of lawn. It cost €3.5million and was funded by an American patron, Stephen Schwarzman.

Pascal Thévard is the Director of the Buildings and Gardens at Chambord and he told Connexion that the new gardens have made a huge difference: “I have noticed a change in visiting habits. Before, visitors would enter the chateau, and concentrate on the interior and leave once they had finished the tour. Now they come into the gardens, enjoy the plants and take time to sit down, rest and admire the exterior of the building with its constantly changing appearance as the light moves across the façades of the chateau. It has done just what any garden should do – act as an extension of the house where you can enjoy the fresh air, your surroundings, and relax.”

History of the gardens
The chateau was built on marshy ground in 1519 so that François 1er could go hunting. When Louis XIV took it over he wanted to introduce gardens and plans have been found for two early gardens to the north and east. Then in 1734, under Louis XV, these gardens were re-designed with alleys of trees and flower beds in the jardin à la française style. This was a style established by the mid-17th century which used symmetry and neatness to impose order on nature. Elements used included geometric plans to give perspective, often to make gardens appear larger, a terrace overlooking the garden so that visitors could see its entirety, and trees planted in straight lines and trimmed.

The gardener most associated with the French formal garden is André Le Nôtre (1613-1700), garden designer at Versailles. The present head gardener, Alain Baraton, has given this description: “A jardin à la française is the kind of garden that is created for you to admire from afar, usually from your house. It is created with precision and authority and is all about man demonstrating his power over nature. An English garden is full of poetry and invites you to enjoy its beauty by being in the garden. A French garden is mostly green, an English one full of colour.”

It took sixteen years to research the gardens at Chambord using documents from the period as well as archaeological digs to trace the way in which the nearby River Cosson had been diverted to make way for the gardens, former evidence of terracing and original gardens. It then took five months and over a hundred people to recreate the gardens. Their design is exactly the same as it was in the 18th century as researchers found papers with the details of the management of the garden over 15 years which gave the dimensions for the widths and lengths of the paths, the alleyways, flower beds and the position of the plants.

Plant choice
However, the choice of plant has had to be modified to suit today’s environment: “We decided not to plant box four years ago,” says Pascal Thévard. “This is because of the box tree caterpillar and box blight which has devastated this plant in so many areas. Instead, we chose Euonymus japonicus ‘Microphyllus’ or Japanese spindle, which is similar in appearance but resistant to disease. It is slow growing and only needs pruning once a year.
There was some worry it might succumb to frost but so far the indications are good as it was planted in November 2016 and had to cope with temperatures down to -15°C over the winter and didn’t suffer any adverse affects. It helps that the soil is sandy and so the roots don’t stand in water.”

In the eastern part of the garden, thyme is used to edge the borders and this is a historically accurate use of herbs: “We found references from a 17th century writer on plants, Olivier de Serres, that herbs were used to edge beds at that time and we chose thyme,” said Mr Thévard. “In the beds on the eastern side we planted 8,800 separate thyme plants and in the beds on the northern side we planted 6,000 Japanese spindle plants.”

Horse-chestnuts were used widely in the original garden, but these too are now susceptible to disease so they have been replaced by Tilia cordata or the Small-Leaved Lime, which grow naturally in the area.

In the original documents there are no references to the names of the flowers and flowering shrubs that were used to give colour. Flowering shrubs have been chosen according to what was known to have existed at the time, such as Syringa microphylla or Little Leaf Lilac and only perennial flowers have been chosen for the beds: “We decided not to use annuals as they are costly in terms of purchase and gardening time but chose more ecological ones that can last for several years, don’t need chemical treatments, use less water and attract pollinating insects.

This is a new move in France and at first it was hard to persuade people that this was the right way forward.”

The gardens have been designed to need as little maintenance as possible. There are no gardeners employed at the chateau, but instead a team of four or five from an outside company are contracted to work there once a week. “It may not seem very many for such a huge garden, but we designed it to be as self-sufficient as possible. They come to cut the grass, rake up the leaves, prune when necessary and dead-head, for example.”

This garden was made possible due to the existence of historical written records. Mr Thévard is continuing the tradition as he has drawn up a file for each species where details such as diseases, treatment and broken branches will be meticulously recorded for future gardeners and garden historians.