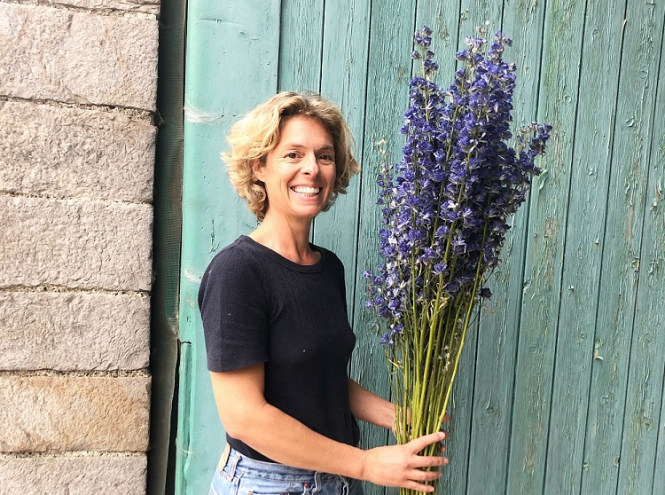 There are numerous florists in France but very few flower growers.

The syndicate representing horticulturists, Val’hor, says that 85% of the blooms we buy for our homes are imported.

A vast majority of those come from the Netherlands, and a proportion of those have already been flown in from East Africa, notably Kenya, and it is difficult to know under what conditions they are grown.

According to environment agency Ademe, one imported cut rose has a carbon footprint of between 0.5 to 1.4 kg – equal to a journey of between two to five kilometres in a car.

In 2018, Greenpeace did a study to find out the number of pesticides in three Valentine Day bouquets. There were seven in a bouquet of gerberas, 10 in one of roses and up to 25 in mixed bloom bouquets.

With increasing concerns over the environment, the slow flower movement is now picking up in France, and one grower has started a group, Collectif de la Fleur Française, to support the culture of local flowers in season, grown as naturally as possible.

The slow flower movement began in the USA in the middle of the 2000s and is now spreading worldwide.

It takes its name from the Slow Food movement, which promotes responsible agriculture.

Hélène Taquet has her own horticultural business, Popfleurs, growing flowers that she dries and sells mostly as eco-friendly colourful confetti for weddings.

She started the collectif because she is sure there is a market for home-grown flowers and she wanted to produce a directory to show customers where to find sellers and growers:

“Fifty years ago, at the Paris Rungis horticultural market there were 400 French flower growers. Now there are seven.

When the Dutch started exporting they were very well organised and quickly flooded the market. Now, we need to work together in France to build up the numbers of growers here.

We have such an opportunity to produce a wide range of flowers, with dry, warm conditions in the south, and more temperate, humid conditions in other parts.”

She says she now has 130 members, of which half are florists and half are growers in her directory.

For a florist to be listed they must sell at least 50% French flowers.

She herself is a farmer’s daughter:

“The farm has always been run by women. First my grandmother, then my mother and now me. Flowers were always part of our culture. We grew them, gave them away and mixed them with colza and wheat from the fields. I first went away to study, but was gradually lured back into the world of horticulture and changed career direction.”

She started a dried flower company but could not find enough French flowers to buy, so began growing her own and realised there was a need to encourage others to do the same.

She grows several varieties, with delphinium, cornflowers and hydrangeas her core crops.

She has no greenhouses and up to now has sown direct into the earth.

This year she will plant in seed trays as well to give her a longer cutting season, and expand the amount of land she plants in because her business is growing. She has already almost sold out of all that she grew in 2019.

It is physical work: “Keeping the weeds under control is difficult as it must all be done by hand to avoid using herbicides.

As well as bending over to pick the flowers, they also need constant watering.

It is hard, but it is a job where I am content, in touch with nature and the earth and working with beautiful flowers.”

She is finding her workload with growing with Collectif de la Fleur Française as more people get in touch and she says there are many new growers, often looking for a change in lifestyle to work closer to the earth.

One such grower is 43-year-old Marie Varenne, who grows flowers and makes up bouquets with cultivated and wild flowers and grasses in the Camargue.

She only began a year ago but loves her new lifestyle: “My father ran a nursery growing trees and my mother was a landscape gardener, so I was in contact with this kind of work as a child.

“I worked in Paris, though, looking after children, then moved to Arles, met a shepherd and moved in with him in the countryside. When I became pregnant with twins I realised I wanted to change direction and began planting my first flowers last spring. I grew a wild flower meadow which worked really well and gave me blooms from June to October.”

Her customers have found out about her business, Fleurs d’Arles, through Instagram and through word of mouth in Arles: “It is a small town, but there is a lot going on and there are people who want flowers for their restaurants and galleries and there are many beautiful Mas houses near here which hold receptions and weddings. So there are potential customers. I do not have a boutique but I deliver to clients once a week.”

She says that though many people still want formal and traditional bouquets with big colourful flowers, there is now a place in the market for more delicate, wilder floral decorations: “Most people do not realise that over 80% of cut flowers come from abroad and when you start explaining that many are grown with pesticides, that they come with a huge carbon footprint and that the working conditions in Africa are doubtful, they are ready for a new approach. They are also ready to accept that flowers have their own season, and provenance, and cannot be available all year round.”

She says that so far she has had no problems growing without pesticides or artificial fertilisers: “I think I am lucky that I have access to manure from the sheep and hay for mulch and that this is an area where there is a rich biodiversity. I grow lots of different varieties and with the surrounding countryside there is a natural balance in the land. If I grew just one crop all that might change in the future and of course I have only just started, but at present using what I have around me has worked.”

“I love growing the flowers and experimenting,” she says. “I only plant flowers that flourish in the Mediterranean, as that makes it easier to grow naturally.

“I also pick local wild flowers and grasses and buy lavender and old roses from two nearby specialists to complement what I grow. I also love the creative side, making up bouquets. I am starting small, but it is an encouraging start.”