Diary of a birdwatcher in France: Mallard ducks 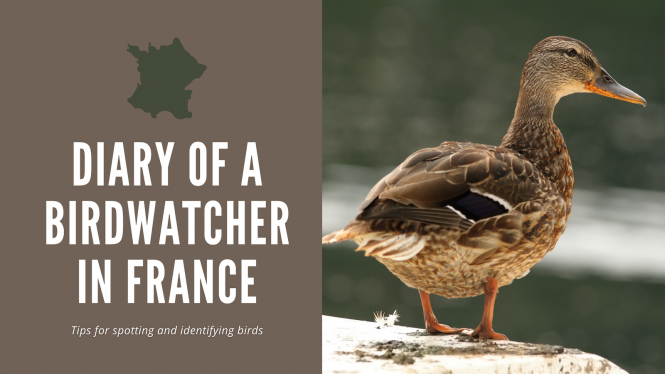 Ducks can sleep with one eye open to keep watch for predators Pic: Taviphoto / Shutterstock

Come the breeding season for mallard ducks, I get to witness an odd and somewhat amusing journey that the young ducklings (canetons in French) make to climb up the two waterfalls outside the mill where I live.

First of all the mother duck, who has wings, flies up the waterfall, stands at the top, and quacks loudly and repeatedly (it is the females that quack loudly, the handsome males are much gentler in their calls, and make a rather sweet sound).

This, needless to say, promotes panic amongst her ducklings, who cannot yet fly and swim around the pond below, desperately trying to join their mother two metres higher. It is the beeping cacophony that makes me look into the pond.

This ritual can carry on for at least an hour, with the occasional flight down by the mum to reassure the little ones, who rush over to her and feed a little to calm their frayed nerves.

Then, up she flies again, and the whole calamity starts over.

Eventually, the ducklings work out that the only way up for them to reach their mother is to scramble up the bank.

Following the most adventurous sibling, they swim over and climb through the thick vegetation. Sadly, one year as I watched, at least one got lost on the journey.

There are two waterfalls, so the whole procedure has to be repeated. I have never yet seen mum leading the way. I have not worked out if she knows that her ducklings cannot follow her by the same method or if she is just a little...muddled.

Amazingly, it seems that this hazardous process works. Sometimes I see the whole family later, and there still is a respectful number of ducklings.

When I lived on a river in town it was usually the case that at the beginning of the hatch there could be ten to 12. A week later that number would be whittled down to three or four as some ducklings lost their way or were picked off by predators.

Our ‘country’ ducks have a better rate of survival, look healthier and there is less hybridisation with a mish-mash of mixed race fathers that usually hang around feeding on the town’s scraps.

If you have never watched, mating ducks is a brutal affair with less willing ducks being pursued by a gang of drakes and constantly having to fly away to leave the less persistent males behind.

She is also testing his fitness; the one that is fastest and can keep up with her is probably going to be the chosen one.

She is then often pushed underwater by the male – hopefully by then only one – as he mounts. In spite of this gruelling process, mallards are the most numerous duck on the planet, and despite the massive loss of the young during the first weeks of life, thrive as a species.

Come September or October the brightly plumed males go into what is called ‘eclipse’.

They lose all their smart breeding colours and somewhat resemble a dull mottled brown female, the difference being they keep the uniform yellow beaks and the markings on the head are more pronounced.

This is to camouflage themselves better during their three to four week moulting period, during which they replace their feathers and cannot fly.

Ducks as a family are nidifugous, that is to say, they leave the nest shortly after hatching and are capable of feeding themselves straightaway, as opposed to nidicolous chicks (think great tits, golden eagles, vultures) who have to be fed in or near the nest by the parents.

A nidifugous parent might stay with and guide their offspring, partly showing them how to feed and what to eat, and partly to give some sort of protection against predators.

Sometimes the male will be around for a while, but often all the work of this stage is overseen by the female alone.

There is a clever mechanism that allows the chicks to be of a similar age when they hatch and so can be led away from the nest at the same time.

The female duck will quickly lay about one egg a day over an extended period and then cover the nest with disguising material such as leaves or grass, leaving as little of her smell as possible.

When she judges the clutch to be complete she will sit to warm the eggs and trigger the growth within, leaving very little and keeping all the eggs warm with her body heat so that the process is synchronised.

She will turn the eggs with her beak so that development is balanced. She can be quite ferocious, for a duck, during this period: I have seen determined hissing in the face of enemies like humans (myself) and dogs.

If possible, she will stay put and not abandon her precious eggs.

When the time comes all the chicks will hatch in a short time frame, and the mother will lead them off to the safety of water, where terrestrial predators like foxes and cats cannot go.

The ducklings will not sleep on the water, as many adult ducks are capable of doing, but remain close to it, snuggled under their mother for warmth and protection.

The parent may well sleep with one eye open, and so rest one half of the brain at a time.

If ducks are huddled in a group, the ones on the edge will be more likely to keep the outer eye open at times, whilst those in the centre of the flock often have both eyes shut.

The typical position with the head turned back towards the wing (not actually ‘under the wing’) leaves an eye free to open from time to time.