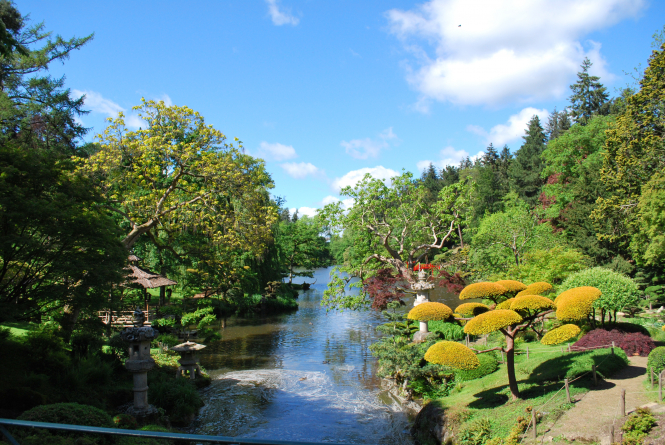 The 12 hectare Parc Oriental de Maulévrier, near Cholet in Maine-et-Loire, is the largest Japanese garden in Europe. Visitors can wander along its paths and enjoy Japanese maples, bamboo, a collection of bonsai and trees pruned in the Niwaki, cloud style. In the summer there are night visits with Japanese story telling.

The history of the gardens

The gardens were created in the late 19th century and early 20th century and were abandoned for several years before they were bought by the local council in the 1980s and restoration began. They were opened to the public in 1985. In 1987, three Japanese professors from the horticultural universities of Tokyo and Niigata visited the park and it was only then that the nature of the garden was fully understood.

The professors explained that the original park was based on the Japanese Edo period from the 17th to 19th century, when large gardens were created for people to walk in with ponds, islands and artificial hills that could be enjoyed from a variety of viewpoints along a circular trail. Water must make up one third of an Edo garden and flow from East to West.

More in Nature: how to build a cosy hedgehog cabin

Flowers in the gardens and what they mean

All these features are present at the Parc Oriental de Maulévrier, including another important element where the seasons represent the transformations of mankind during life. Colourful azaleas, camellias and rhododendrons in flower in spring represent birth; the gentle whites of philadelphus and the mature foliage of the catalpa tree and other foliage in summer represent maturity; the rich colours of the Japanese maples, Nandina bamboos and Chinese larch in autumn symbolise the wealth of knowledge acquired throughout life and the falling leaves symbolise death.

In winter, there are evergreen conifers and Japanese laurels which represent the immortality of life. The professors said the original designer must have been very knowledgeable and the park is an accurate representation of an Edo garden. They were convinced a Japanese master had visited during its creation and were particularly struck by the peace and calm they experienced as they sat on Meditation Hill.

The architect behind the project

The designer was an architect, Alexandre Marcel, who worked on the park between 1899 and 1913 and adored the oriental fashion of the period. He was married to Madeleine Bergère whose family owned the Castle Colbert at Maulévrier, which came with extensive grounds. Marcel installed a pond, planted many exotic plants and he brought in architectural structures typical of the Khmer Empire, which had been on show at the 1900 Universal Exhibition, so that the gardens also have Cambodian influences. This is why the Park is Oriental rather than Japanese.

A head gardener, Alphonse Duveau had a team of more than ten gardeners to look after the site. Alexandre Marcel died in 1928 and his wife continued to live at Castle Colbert until 1945. The property with the gardens were sold and as they were not maintained they fell into disrepair. The land was used for agriculture including grazing land for cows. In 1980, the park was bought by the Maulévrier town council and restoration began using documents and photographs.

An Oriental experience for visitors

Fabrice Jeanneteau, head of Communications for the garden says a visit will take around two hours but many visitors stay longer, falling under the spell of the charm of the park: “The garden has been designed so that at every turn there is something new to see. One of the aspects of an Edo garden are the representations of different aspects of Japan in miniature. Meditation Hill is formed like a mountain with a flat top and looking at it from the lakeside it is reminiscent of Mount Fuji. Water is very important in the gardens, and like the seasons represents the cycle of life.”

There are different areas. In the Pagoda garden there is a building which is half-timbered and though more Normandy in style rather than Japanese, it has always been called the Pagoda because, built in 1903 it was the place where tea was served. It was restored in 1985 and 1988. There is also a group of rocks which represent a mountain from which a river will flow as a symbol of birth. The stream from spring to pond evokes childhood; the pond the troubled teenage years and the waterfall symbolises the physical and intellectual changes in this period. The running water of the stream from the waterfall to the lake symbolises the active period of maturity but it also meanders to reflect the problems faced in adult life. Finally, the water flows into the lake to represent old age and retirement, a calm and serene period.

Nature in France: what are those shiny blue bumble bees?

The Khmer temple in the garden is one of the buildings brought from the Universal Exhibition of 1900. Inside there is a statue of a Buddha. There are many symbols throughout the Park. The two islands are called the Tortoise and the Crane and represent the principal of Yin and Yang, harmony between two opposites. They also symbolise life after old age and death. The red colour on the bridge shows it is a sacred place.

There are around 400 species of plants. About one third are Japanese including cherry trees and azaleas, one third are European including weeping and common beech and one third come from the Middle East and America such as a giant redwood planted when travellers brought back exotic specimens in the late 19th century. There is a collection of bonsai and a shop selling bonsai and other Japanese plants with advise on hand.

It requires a special type of gardening and Mr Jeanneteau says there is a committed team of gardeners, some of whom have been there for thirty years and developed knowledge and skills which are passed on to younger recruits. In summer, he says the night visits have a special magical atmosphere when a guide will take you through the park which is specially lit. There are stops at six stations where you can hear a Japanese story. Usually these nocturnal visits take place from May to September and this year the park hopes they will be possible in August following the Covid-19 crisis.

“I have grown to love these gardens”, says Mr Jeanneteau. “Visitors love them too, even those who say that normally they have no interest in gardens.”