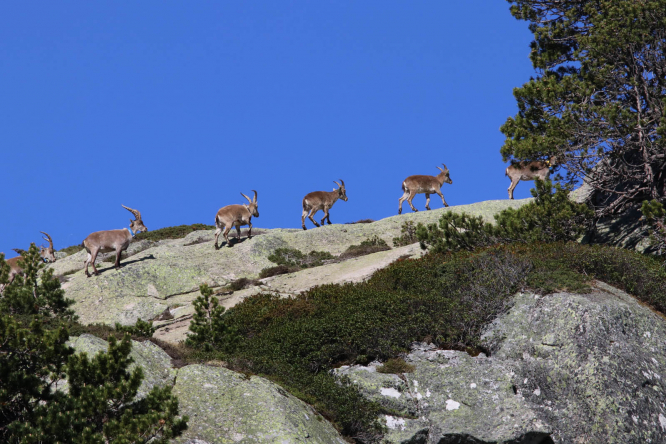 Further releases of ibex are likely to take place in 2022 and 2023, with females from different populations in Spain to avoid gene pool problems Pic: Courtesy of Alexandre Garnier

The ibex has returned to the Pyrenees after years of top-level diplomacy between France and Spain.

Hunters killed the last two ibex – a sort of mountain goat with large horns – on the French side of the mountains in 1910, and the Pyrenees species became officially extinct when the last surviving female on the Spanish side died in 2000.

They had survived in Spain because a Spanish king in the 1920s created hunting reserves for the animal and the tradition of wealthy people coming to hunt had continued.

With advances in DNA testing, scientists discovered that what had been thought to be distinct subspecies of ibex in Spain were genetically the same.

Eric Sourp, who led the French scientists in the Parc National des Pyrénées, said: “This gave us the inspiration to really try and do something about reintroducing them in France as we had proof that they were the same animals as the ones extinct here since 1910.

“Ever since the park was created in 1967, there was the idea of reintroducing the ibex, but it always floundered because the Spanish did not want to send any of their ibexes over to us.”

Spanish fears centred around the hunting practices which had evolved around the ibex. It was one of the main sources of revenue for some Spanish communes.

High-level talks on reintroducing the ibex began again in 2010 between France, Spain and Andorra, and when the French promised to ban hunting the ibex, the situation unlocked.

“It is a bit of a funny situation. We had to get the French environment minister to issue a decree saying people cannot shoot Pyrenean ibex, which had been extinct in France for 100 years,” he said.

The first release of a dozen individuals from a population from mountains in the centre of Spain took place in secret in 2014, because there were fears that angry Spaniards would block the lorries with the animals. A couple of days later, a second release took place in the presence of French and Spanish environment ministers.

There are now three separate herds of ibex in France, totalling some 270 individuals, and in 2020, 55 kids were born and survived.

“They are a very healthy population, finding more food this side than they do on the drier Spanish side, and they are larger than in Spain,” said Dr Sourp. “What we did not expect is how well they have been accepted by people – unlike the bears, which still cause controversy.

“They allow humans to get close to them, which helps, and certainly this year they were internet stars from March into late May, when they come down the mountain to eat spring grass and hikers see them.”

In winter, the ibex stay high in the mountains, living off what greenery they can find and also from scraping lichen off trees and rocks.

Further releases of ibex are likely to take place in 2022 and 2023, with females from different populations in Spain to avoid gene pool problems.

After that, it is hoped that the Pyrenees ibex will slowly spread across the whole mountain chain.

Care homes in France: Is living with a host family an alternative?
14 January 2022
More from Nature
More from Connexion
Get news, views and information from France
Join the newsletter
Subscribe to The Connexion