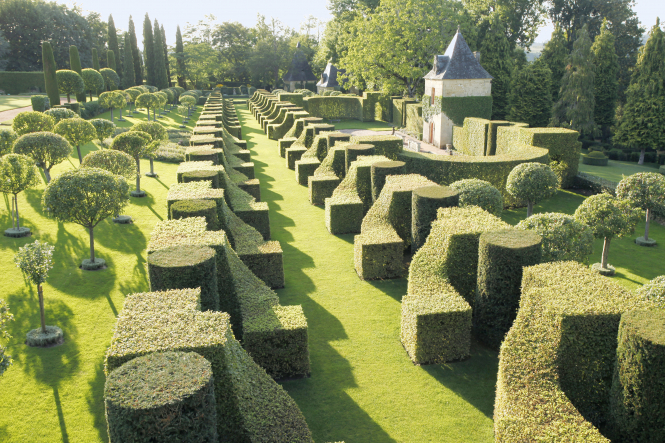 Eyrignac et ses Jardins, at Salignac-Eyvigues, Dordogne, was one of the first gardens to open to the public, in 1987, at a time when there were very few to visit in France. It has now been open for 31 years and welcomes 81,000 visitors a year to its 10 hectares of garden which is best known for its topiary and Jardin à la Française.

There are 50,000 box, yew and hornbeams as well as cypresses and trained ivy, sculpted and tended to create a garden, dominated by shades of green, where everything down to the last detail, has been designed to create a carefully crafted aesthetic impact.

This is no surprise as the garden was designed by a man who knew very little about gardening, but a great deal about style. Gilles Sermadiras, who drew up the plans for the garden, founded the lifestyle magazine Maison et Jardin and was a pioneer of garden furniture.

He inherited Eyrignac, which had belonged to his family for 500 years. Its first garden in the 18th century was in the French formal style but this was converted into an English romantic garden, fashionable in the 19th century.  It was then abandoned until Gilles Sermadiras came back to the property in 1965 and his dream was to restore the 18th century garden.

He searched for clues as to the original layout, but found very little, other than a few vestiges, such as a monumental vase which is still in place. So he came up with his own ideas. It was a purely personal project. He had no thought of creating a garden which would one day be open to the public. He did, however, ask his son Patrick to work on it with him. Neither had any horticultural knowledge. Little by little they staked the alleys, planted, transplanted and arranged the plants in rows.

Patrick Sermadiras says that eventually the only way he could see to realise his father’s dream, was to open it to visitors: “At first we thought I would be able to do it all on my own, mowing the lawns and looking after the plants. But as the years went by we realised that it takes a great deal of time and money to maintain and nurture such a garden. We now have six full time gardeners and six other staff, rising to 15 in the summer, and even though we have so many visitors, we still do not make any money from it.”

He is proud of their achievement: “I would like to think that I was one of the first to make the French style of garden popular again. I describe this type of garden as a man’s garden, where there is order and it looks as if it has been designed by an architect and like a line of soldiers, nothing is allowed to be out of place.”

At first there were very few flowers, but “my wife likes flowers, visitors like flowers and though they take a great deal more looking after, we have now introduced areas with flowers,” he says.

Looking after the garden

The six gardeners are always busy and there are even periods when extra hands are hired. As Gilles and Patrick Sermadiras quickly found out, keeping a garden like this is a massive undertaking.

The most famous avenue, which Patrick Sermadiras calls ‘the Dordogne’s Champs-Elysées’, is formed by a double row of columns of yew trees, interlaced with garlands of hornbeams, in the form of spiralling buttresses and which is a unique design. It is the most difficult to trim. The hornbeam grows fast, about 80 centimetres a year and has to be hand-trimmed four or five times from May to September. The first cut in May takes eight days, just for the Hornbeam Alley.

Sarah Aït-Ali, who assists Patrick Sermadiras and his wife Capucine in running the gardens, says that it is difficult to know which is worse: “We can treat the caterpillar using an organic treatment which works well and has prevented any problems, but if the fungal disease arrives we can only get rid of it by using fungicides. So far we have managed to avoid any damage.”

The yew is hardier and because it is very slow growing, about 20cm a year, it only needs to be trimmed once a year. Because it has a very dense foliage it can be trimmed into any shape.

The other huge task is to look after the acres of lawn, which were chosen to line the alleys to provide a more aesthetic green background to the topiary, rather than gravel paths. It was never designed for visitors or to bear the passage of thousands of footsteps and so many of the grassy avenues are out of bounds.

A huge amount of care goes into the maintenance of the grass which is made up of a mixture of English Ray-grass, fescue and Kentucky bluegrass. The supply of water and nutritive elements is calculated for each different area, according to the richness of soil.

In the autumn the grass is scarified, then aerated by making holes in the lawn and compacted areas are loosened. Reseeding takes place every year and throughout the year there are soil enrichment operations and regular, manual weeding. The grass is cut every few days. The lawns are constantly watered and one of the great assets of Eyrignac is its seven natural springs which enables it to have an irrigation system with more than 500 sprinklers buried beneath the soil.

Finally, in a garden whose beauty comes from well-defined lines, the edges have to be trimmed. At the beginning of the year they are straightened with an edge-cutter and then trimmed into shape with scissors once a month. It is a long job as they measure up to a total length of 7kms.

As well as the formal French gardens there is a kitchen garden, a flower garden, flower meadows, a farmyard topiary area with chickens, rabbits, peacocks and a sheep, plus a tree nursery and a pagoda, to echo the period theme as they were a popular feature in the 18th century.

One of the favourites is a white garden, where the dark green of the low box borders is softened with flowers such as hardy common roses which are cut low and bloom all summer, petunia surfinias, impatiens and bulbs in the spring, and where popular evening picnics are held in the summer, when guests are encouraged to dress in white.

The gardens are open every day, all year and tours in English are possible for groups of at least 15 by reserving in advance. www.eyrignac.com