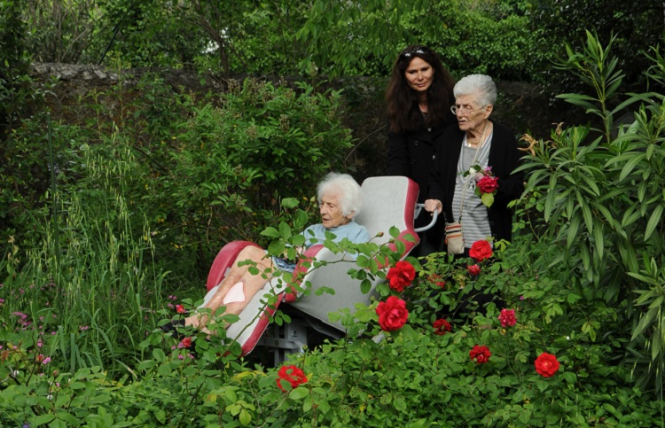 Jardins & Santé is a charity which supports the creation and development of therapeutic gardens in hospitals and medical centres.

It was founded in 2004 and was inspired in part by the UK National Gardens Scheme so that some of its fundraising comes from members who open their gardens with all proceeds going towards Jardins & Santé.

“So far, we have been able to give grants to 60 gardens,” says Martine Claire Pouchain who is Jardins et Santé regional representative in Burgundy.

She has been involved in the charity since 2005. “Each therapeutic garden is different, designed to meet the needs of each centre.

Some are a pleasant green space where people can walk in and others are created so patients can enjoy gardening themselves.

“There is a great deal of demand for our grants. In one year we had 145 requests, but we could only support 17 projects and this year there are 80 dossiers, but we will only choose five. We prefer to give a reasonable sum of money each time so that a project can really come to fruition, rather than spread the money thinly. But we would like to be able to help more because we are convinced of the benefits. A garden cannot cure an illness, but it can bring hope and joie de vivre for somebody faced with health issues.”

She says she was struck by the difference a garden can make when she visited one the charity had supported at the psychiatric unit of the CHU at Nice: “Before there was nothing in the courtyard between two buildings, just bare earth. Now there are cypresses, Mediterranean plants and a pond with fish. Doctor France Pringuey, in charge of the unit, told me the benefits are incredible. There are patients who have a window view but are in such a severe condition they cannot come into the garden. They used to cry out frequently, but now they can see the greenery, the fish in the water and people moving about, they are far calmer.”

Jardins & Santé gave €45,000 towards the creation of Le Jardin des Vents at the public hospital at Castelnaudary, Aude. John Riddel, has been involved in its conception since the start ten years ago: “The Lions Club, of which I am a member, had the idea to turn the 6,000m2 of empty fields around the hospital into a garden. It took a great deal of planning and effort to finance it purely from charitable donations but now it is a multi-purpose area serving different types of patients.

“There is a fitness trail for the general hospital and convalescent home with bridges over rivers and varying degrees of challenges and also places to sit and relax. A fenced area has been created for dementia patients so they cannot wander off. There is a vegetable garden where the produce is used for a disabled children’s centre’s meals and other groups, including children with psychiatric problems visit twice a week and take part in gardening activities.”

There is no shortage of ideas.

A pétanque area has been so popular it will soon be made bigger; the Jardin des Oiseaux has bushes with berries to attract birds; and there is an area popular for picnics shared by members of staff, patients and the public.

One of the surprises for the creators of the garden is that it is also used by local people so that it has become a lively place with a wide range of different people using it.

The health benefits of a garden are now accepted by many.

Research first took place in the USA and the UK and now there is huge interest in France.

It is recognised that gardens encourage physical activity because patients have somewhere nice to go outside, get people talking to each other rather than staying in their bedrooms and they stimulate the senses and bring a sense of calm to those with mental issues.

Nearly every two years Jardins et Santé organise a symposium where doctors and other medical staff, researchers and landscape gardeners meet and discuss the best ways to create a healing garden.

The charity would love to welcome more members and more gardeners willing to open up for a day, with all proceeds going to Jardins et Santé.

To open a garden, you do not need to be a member of Jardins & Santé but need to have a garden which has enough to interest a visitor for 45 minutes.

It can be ornamental or a vegetable garden. You choose the day when you want to open and can do so once or several times. Regional representatives like Martine Claire Pouchain are on hand to help.

Lyn and Peter Steven are part of a group of friends who have five gardens between them in Saône-et-Loire and Rhône-Alpes.

Their group of five gardens is called La Quintette and they have opened their gardens one weekend a year in June for the past four years.

During that time, they have raised €14,100 for the charity and between them received over 3,000 visits.

The previous President of La Quintette, Doranne de Ward, was instrumental in encouraging the five owners to open their gates to visitors.

But this year she and her husband have decided to hang up their spades and trowels, and visit gardens for a change instead. So their garden at Prizy will not be open in 2020.

However, a totally new garden is joining the group, keeping the overall total to five.

This new garden, called “Le Jardin de la Maison Marais”, in the centre of Charolles, is completely different from the other four.

In addition, the British owners have taken over an ancient potager within walking distance of their house, and brought it back to life.

Lyn and Peter Steven say La Quintette’s experience over the four years of opening, has surpassed all the owners’ expectations: “It is wonderful to share our passion and gardening experiences with our visitors. We opened our own garden for the first time in 2017. It is a one acre walled garden set in La Clayette.

“All the enthusiastic reactions we received then, and especially in 2018, spurred us on to open last year too, which was another huge success. Each of the five gardens is completely different; each with its own style and charm. The gardens continually evolve, so there is always something new to see each year.”

Entry costs €5 per garden or €20 for a ticket to visit all five at any time during the weekend of opening.

Full details of all gardens open near you can be found at jardins-sante.org

Stay informed, have your say, join the community
Boost your inbox with our editor’s pick of news and information about France for residents and second homeowners
By joining the newsletter, you agree to our Terms & Conditions and Privacy Policy
1
'Very tight' lockdown is one option under review in France