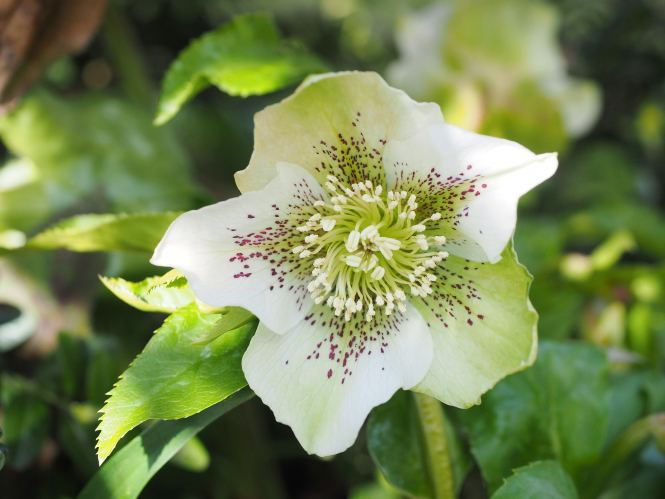 Do you know the story the little shepherdess called Madelon who met the three Magi on a hill above Bethlehem? At first excited, she then wept because she had no gift for baby Jesus. But hey presto, an angel turned her tears into the Christmas rose, Helleborus niger.

It will soon be everywhere in the shops – so Madelon’s lack of gift has bloomed into our ideal present for someone who loves flowers in the home at Christmas.  Better still, after it has finished flowering it can go into the garden.

The reality is a little different, isn’t it? For a start, H. niger rarely blooms at Christmas. You can wriggle out of this small problem by pointing out that the Fête des Rois is January 6 – and the hellebore does often seem to make this calendar appointment.

The next problem is that it does not always do so well in the open garden. This is a plant that comes from woodland edges in the mountains of southern Europe and it really does best in quite an alkaline, rich, loamy soil with good drainage. A wet spot, or one in full sun, is unlikely to suit.

Due to its aversion to excess water around the neck, you must be sure not to set the collar of the plant below ground and ensure it gets plenty of water up until midsummer and a fair old bit of drought after that. Oh, and it does not like wind either.

Do not lift and divide once in more than every eight years – it does not like being disturbed in the garden (do any of us?). If you really want to make more, do this in spring while the soil is still moist and make sure your divisions are large enough – better still, you could try putting them in pots of potting compost until they are growing on strongly.

If you save seed, sow it as soon as ripe in July or August. Put the pots of seed outside in a sheltered spot and keep them moist. No germination will occur until the following spring, since the seed needs winter cold to break dormancy. It takes plants 2-3 years to flower.

The specific name ‘niger’, by the way, refers to the black roots. From the time of the ancient Greeks the Christmas rose has been included amongst the four classic poisons – the other three being nightshade, hemlock and aconite. Do not be afraid, however, the real plant is not as toxic as it sounds, although in the Middle Ages it was used to provide poison arrow tips.

Nevertheless, it has been used by herbalists for centuries. John Parkinson wrote that the plant is ‘good for mad and furious men, for melancholy, dull and heavie persons, and briefly for all those with blacke choler, and molested with melancholy.’ Quite a claim, but does it work?

There is a much more positive, centuries-old belief, however, that if you bring the flowers of Christmas rose into a room they will banish an unpleasant atmosphere and promote peace and tranquillity. It all seems a little contradictory, does it not?

And here we have our next problem – bringing them into a room if you have not bought them in a pot. My hellebores usually flower too late, the stems are often too short and the flowers are never the pristine white you want.

Fortunately, there are solutions. This is perhaps a perfect plant for forcing in pots in a cold greenhouse. Alternatively, set glass bell jars or cloches over the plants when they begin to flower and use a slug/snail deterrent. There’s nothing so awful as a flower that’s supposed to be pristine with half its face eaten away. Some recommend that you watch out for Helleborus niger ssp macranthus in order to guarantee long stems, but there is a modern alternative – a ‘new generation’ of Christmas rose that breeders have worked on for our delight. I’ve discovered two cultivars called ‘Joshua’ and ‘Jonah’, although it is hard to purchase them.

Dutch nursery Kwekerij Verboom has bred a plant guaranteed to flower with decent stems at Christmas – ‘Verboom Beauty’ is available from those lovely hellebore people at Ashcroft nurseries in England – and they mail order to France.

What’s your favourite Christmas plant and how do you look after it after it has flowered? Email me at: editorial@connexionfrance.com