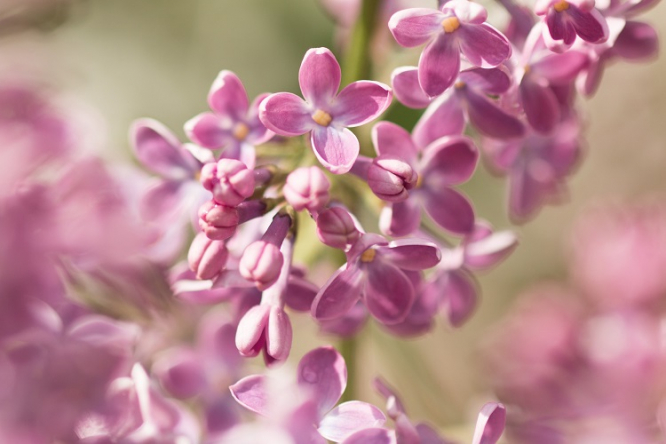 In North America they still call them ‘French’ lilacs and they are adored.

There was a tradition on the frontier for settlers to plant lilacs around the entrance to the house they had just thrown up in the middle of nowhere, to bring scent, beauty (and perhaps luck) as they stood on the threshold of a new life.

Apparently there are many places out west where the only sign that someone used to live and farm there is an unruly old lilac – proof that this is a shrub built to last anything nature throws at it – from extreme cold to scorching drought.

But why ‘French’ lilacs? The answer lies in my own corner of France, Lorraine.

During the 19th century, Nancy throve on the textile industry and was wealthy enough to support at least three nurseries in and around the city (not including market gardens).

The most important was that of Victor Lemoine, who set up business in the 1850s with financial backing from his father (also a professional gardener).

He hybridised many plants to produce garden-worthy cultivars, but is perhaps best known for crossing the common lilac, Syringa vulgaris, with double-flowered S. ‘Azurea Plena’ (an obscure plant found in a Belgian nursery) to produce the French double lilacs.

It brought him world-renown, in recognition of which he was the first foreigner to be awarded the Veitch Memorial Medal by the Royal Horticultural Society in 1894.

His office must have been as fascinating as his nursery – crammed with correspondence from lilac devotees around the world.

Having recently purchased one of Lemoine’s most famous hybrids, ‘Katherine Havemeyer’, I would love to see the letters between Lemoine and Katherine’s husband, a wealthy American industrialist who was the first to introduce the French hybrids to the US. Havemeyer himself went on to become quite the lilac breeder.

The homesteaders may have loved lilacs, but today’s gardeners often complain that they are boring (even ugly) for about nine tenths of the year.

If this is your beef, get on and plant Clematis viticella cultivars, which can usefully be trained to weave through the foliage of any seasonal shrub.

They flower late season from June onwards, and so can be cut back hard in February.

My experience has also been that they tolerate summer drought well, shooting again from the base the following spring.

Controlling lilac height is crucial – you want to be able to smell and see those flowers, not stand with a crick in your neck staring up to the sky.

So keep lilacs to no more than two to three metres high by removing about a fifth of the old wood directly after flowering every year, on a five-year cycle.

To renovate a venerable, but messy old plant (perhaps you have just acquired an abandoned homestead?), cut back one third of the wood in the first year as close to ground level as possible, and continue to cut back a further third in the two following years.

People like to talk about propagating lilacs from suckers – don’t!

Many lilacs are grafted onto a Ligustrum ovalifolium (garden privet)rootstock, and it is impossible to tell whether or not you are dealing with a grafted plant.

Instead, try cuttings of young shoots in spring. Take lots, since the success rate is low.

Make cuttings between 10 and 15 cms long, first thing in the morning when the growth is fully turgid, then root them in a bottom-heated propagator.

Make sure you ventilate for a half hour every day, since the most likely demise of your youngsters is through grey mould (botrytis) on the foliage.

If you cannot decide what cultivars to add to your garden, there is a wonderful collection of Lemoine hybrids at the Jean-Marie Pelt botanical garden in Nancy that provides a living gallery to aid your choice. Soon-to-retire curator, Jean-François Gonot, must have had a wonderful time collecting the over 190 Lemoine hybrids that he has assembled.

The search has taken him from the States, to Canada, to Russia, and the exchange of plant material across the planet continues.

The world’s love affair with lilacs has its roots firmly in the soil of Lorraine.

It is astonishing, when you look at a list of modern cultivars, to see how many give ‘Mme Lemoine’ as one of the two parents in the cross.

White ‘Mme Lemoine’ was apparently popular as a forcing hybrid (for cut flowers) in the Netherlands at the beginning of the 20th century, but the eponymous heroine was even more popular with Victor Lemoine himself, since he married her and she was key to his success.

When Victor’s eyes showed signs of failing, his wife, Marie-Louise, and son, Emile, carried out all the more intricate pollinating work: a precarious task which had to be conducted at the top of a step-ladder!

If I had to choose Lemoine hybrids no garden should be without, I would suggest ‘Mme Lemoine’, with snow-white double flowers, double, rich reddish-purple ‘Charles Joly’, double, pinkish-violet ‘Katherine Havemeyer’ and luscious double violet ‘Belle de Nancy’. All are freely available in the trade in France and can be bought as quite small plants – lilacs grow quickly.

If you are in the Nancy area during lilac time in April/May, do not pass the Jean-Marie Pelt botanical garden without a visit!

You can email your questions to Cathy at editorial@connexionfrance.com