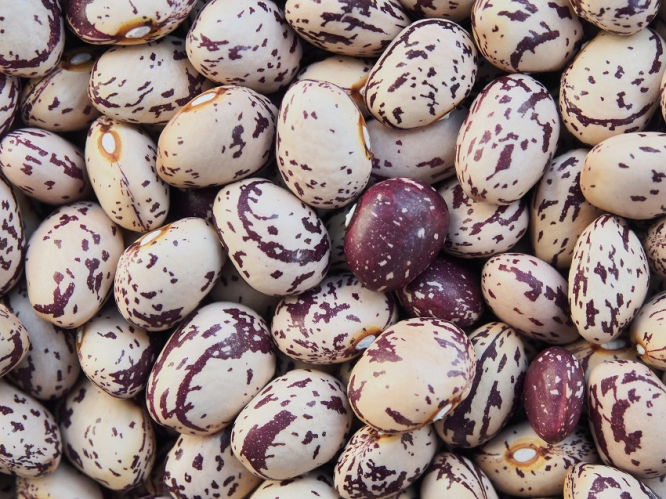 Give scarlet- splashed borlotti beans a try – they are showier and easier to find for picking!
By Cathy Thompson

Supposedly it is safe to plant out tender things after the fête days of the Saints de glaces (May 11 to 13) – or so they say. What they do not often say is that these saints (Mamert, Pancrace and Servais) first acquired their reputation for provoking a sudden cold snap in the Middle Ages.

Not only were their fête days later replaced on the calendar by those of ‘worthier’ saints, but we are also fairly sure that modern weather patterns are dissimilar to those of the Middle Ages.

Still, it is as good a place as any to draw a line for planting out ‘tenders’ such as tomatoes, courgettes, cucumbers, sweet corn and French beans. If haricots and other tender beans are sown direct into the open ground earlier, make sure that the soil temperature is more than about 12°C and that night-time temperatures do not dip much below 10°C.

We are all starting to appreciate colour and decorative effect as much in the potager as in the ornamental border, so if you are looking for something eye-catching, give scarlet-splashed borlotti beans a try – like the yellow pods of haricots beurre, they not only look showier, but are easier to find when you are picking! They come in dwarf and climbing forms, but the climbers (as with French beans) are far more productive.

Bred in Italy from the common Phaseolus vulgaris, they have been much loved for their thick skins and creamy flesh, tasting slightly of chestnuts, and are a feature of many classic Italian dishes. Since they contain all nine of the essential amino acids, the building blocks of protein, they are a first rate protein source, and are said to stabilise blood pressure into the bargain with their high potassium content.

If you use them dry, soak overnight, and then mix with lots of olive oil, garlic, a few beefsteak tomatoes and large sprigs of sage. Season, cover with water and bake in a covered casserole dish at a medium heat until tender. Unfortunately they do lose that marvellous crimson mottling when cooked.

Gardeners tend to believe that legumes (peas, beans) add nitrogen to the soil, due to the nitrogen-fixing bacteria – rhizobia – that colonise their roots. Sadly untrue. Yes, the bean and pea plants do fix nitrogen, but this migrates to the beans when they are ripening, so we eat that good stuff, making it once again unavailable in the soil.

If you want to add nitrogen naturally to your soil, the best method is to sowing a nitrogen-fixing green manure (such as clover and vetch), and then dig it back into the soil when the plants come into flower.

The stars in my garden are the plants that come and go, sometimes very briefly. Amongst the most precious are iris, peonies and the old-fashioned roses. I have been holding my breath since February, but all are finally making an entrance in May.

In 2018, all of my old roses were in full flood by the end of May, but by the middle of June it was nearly curtains up, due to the hot weather. I’ve written previously about the Bourbon roses, most of which satisfactorily repeat through the summer.

The other repeaters I grow are the recently deceased David Austin’s ‘English roses’. Austin used the old roses (Centifolias, Albas, Damasks, and so on) with modern Hybrid Teas and Floribundas to create romantic roses with the shape, scent and colour of older cultivars, but a reliably repeat-flowering habit. Now, to our joy, he has seen fit to open a French branch of the nursery.

But there’s a catch. It has been my experience (and, I read on the internet, that of many American gardeners) that they don’t seem to do so well in the kind of heat we experience in France, having been bred for cooler, wetter British conditions.

If you can offer part-day shade you are likely to be more successful.

A few of my favourites include: deep violet-red ‘Munstead Wood’ (pictured left, the most reliable and continuously flowering if happy); shell-pink ‘Heritage’ (does very well in hot sun), apricot ‘Abraham Darby’, deliciously peachy ‘Jude the Obscure’; and red-budded ‘Lady Emma Hamilton’, which opens to a luscious orange and cranberry mix.

What’s your favourite David Austen rose, and why? Have you tried many of the modern French cultivars? Email me at: editorial@connexionfrance.com