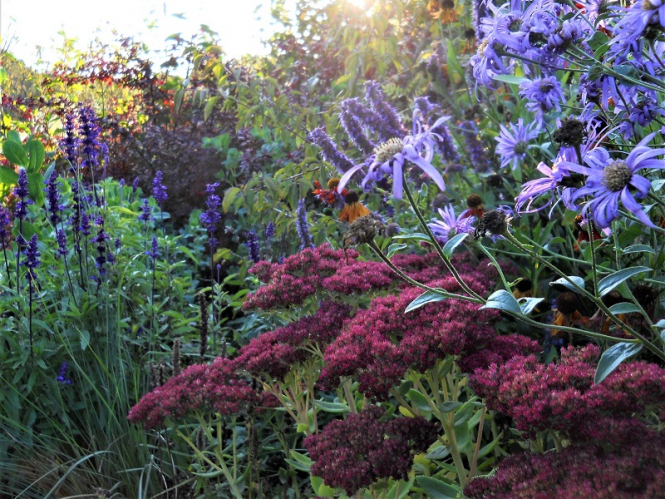 At the moment an organic gardening friend of mine is continually putting me to shame on Twitter. Every time I look (admittedly not very often), I find another tweet from him pressuring for the use of peat-free compost.

This is a campaign that has been going on in Britain for literally decades now, but the government has now committed to eradicating peat in amateur potting composts by next year, and the Eden Project and the National Trust have banned its use for some time.

We all know the reason – and it seems more pertinent than ever this year, doesn’t it? Peat bogs take thousands of years to form and a one-metre depth is said to be the result of a millennium’s worth of decomposition, with the deepest said to date back about 12,000 years.

In the UK they are referred to as that country’s ‘rainforests’, due to the delicate nature of their composition, but mainly because they absorb and store carbon.

However – even as scientists in Geneva are bringing us some good news regarding the effect that increased tree planting could have on climate change – we are still busily destroying this precious resource.

Eventually, if enough peat is extracted from a bog, it will dry out and release the stored carbon into the atmosphere – an estimated 500 metric gigatons.

Peat bogs comprise 3% of the earth’s surface and a notable example in France is the tourbière humide of the Lac de Lispach, in the Vosges.

But pressure to produce peat-free composts is fairly insignificant in France, in comparison with Britain.

In my area it is impossible to buy terreau sans tourbe locally. At the moment I am lucky enough to be able to import John Innes composts into France (cars with large boots are a gardener’s best friend!).

I rationalise that this is better, because the traditional J.I. recipe calls for proportions of good quality loam, sand, peat and fertiliser. I chose it originally because I felt it gave plants going out into the exceptionally heavy soil of my garden more of a taste of what was to come.

Yes, there is peat in that mix, but the proportion is much lower than the 60% to 90% that you would find in a peat-based compost, at roughly 25% of the total loam/peat/sand volume. Slightly easier on my conscience, but not ideal.

I could also use a British J.I. mix that includes a peat substitute.

However, since my friend made me blush with his pictures of the different plants (tomatoes) that he used to test the composts available on the British market, I began to think that perhaps the gardening community in France should really sit up, take notice, and test the few composts available to us here. All with a view to exerting the necessary pressure for change in our adopted country.

So, since October is the second month of the new gardening year, I am beginning to compile a list of composts from different French suppliers: I aim to conduct my own trial when seed sowing and potting on begins in 2020.

In researching availability I found rather a useful little list produced by the Fédération des conservatoires d’espaces naturels. Unfortunately it dates from 2009, but anywhere is a good point to start when researching what is available.

Using the list as a jumping off point, I have chosen four products that I will probably have to buy online:

1. ‘Terreau Universel’ from Or Brun;

and composts from the ‘Terre & Nature’ range produced by Florentaise.

This last uses, I believe, a small proportion of what they describe as ‘locally sourced’ peat – is it better to destroy our own environment than somebody else’s?

My friend’s choice of tomatoes for compost-trialling is quite a good one, since they are easy to germinate and grow relatively quickly, allowing fast comparison.

However, I need to choose only one type for the test, since tomatoes (as we all know) are variable in vigour between cultivars.

Tips for the month

I made a great discovery last year. I always grow squashes and pumpkins to serve up as soups, curries and risottos during the winter months.

Butternuts are my favourite, but I have never managed to get them to last beyond February, in spite of leaving them in the sun to harden the skins for at least 10 days.

Last year I harvested a number of butternuts when they were still only lightly coloured, leaving them out to ‘weather’ in the usual way.

The result? Butternut squash soup in May 2019!

What is your favourite French potting medium? Do you stick only to peat-free?

Share your experiences of this compost with other gardening readers of The Connexion, and perhaps you would even like to join me in informal trials in 2020 (although I cannot guarantee to be a faithful Twitterer!)? Email editorial@connexionfrance.com