Gardening in France: The skin deep power of the marigold 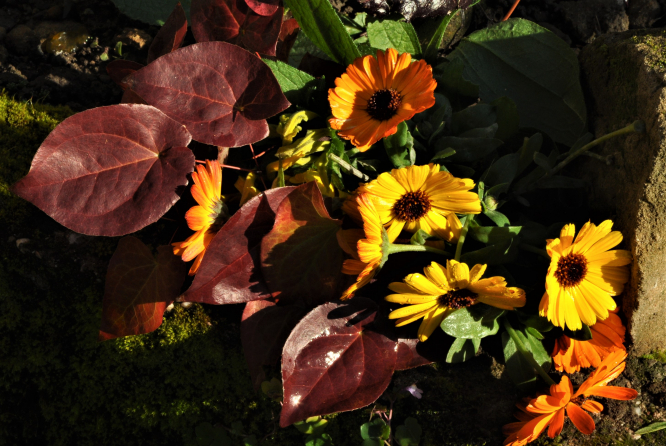 Companion planting is once again de rigueur in all the ‘best’ gardening circles, thank goodness. We know that the colours and scents of plants can attract both pests and beneficial beasties. That is how associating unlikely plants in the potager works – one plant confuses the message that its neighbour is sending out, or actively attracts beneficial predators away from vulnerable bedfellows.

You may already use the scent of onion family members (from leeks to actual onions) planted close to rows of carrots to confuse the senses of pesky carrot flies. (In fact the strongly-smelling onion family particularly excels at confusing or repelling predators. I have used garlic planted in rings, for example, to keep campagnols – voles – at arm’s length from precious plants.)

But try also pot marigold (Calendula officinalis, not to be confused with Tagetes, the French marigold), one of my favourite companion plants. It repels white fly and flea beetle and can tempt aphids away from nearby vegetables, as well as attracting beneficial insects like ladybirds, lacewings and hoverflies that predate on some of the nasties. (Although it is true that your pot marigolds might not be as pretty as you would like when smothered with greenfly!)

The scent of pot marigold foliage deters rabbits, whilst underground the roots produce a chemical to which nematodes and asparagus beetle are averse.

April is the month to get sowing and you might try some of the more interesting colour strains. ‘Indian Prince’ is an old favourite with particularly rich orange petals, offset by a rim of mahogany from the petal’s reverse side. I also like ‘Sunset Buff ’ in paler apricot, but with the same reddened rim. ‘Pink Surprise’, when I grew it a few years back, was disappointingly not pink, but pretty and different nonetheless.

In France we can purchase these from Irish seed supplier, Seedaholic, Dutch seed merchant Sluis Garden, or Garden Seeds Market. They are so easy to grow that I will leave it to you, mentioning only that you will get the healthiest (and most pest-attractive) plants if you leave 20-30cm between plants.

St. Hildegard of Bingen allegedly gave the plant the name ‘Mary’s gold’ in honour of the Virgin Mary, not just for the golden petals (said to resemble the rays of sun often depicted around the Virgin’s head), but also because in a mild climate Calendula can be in bloom for all of Mary’s festivals, from April through December.

In France we know it as soucis, but I love the middle English ‘goldes’. ‘Ruddles’, on the other hand, sounds too jolly to be the same plant as Shakespeare’s well-observed ‘marigold that goes to bed wi’ th’ sun and with him rises, weeping.’

From Roman times to the Renaissance, Calendula was the ‘go to’ home remedy for so many ills, particularly burns and damaged skin

It was even pitted (unevenly) against the bubonic plague in 17th century London, whilst a more successful use was found amongst the battlefield wounded of the American Civil War.

Seventeenth century herbalist, John Gerard, notes that marigolds ‘strengthen and comfort the heart’, commenting that the Dutch of his time added the petals plentifully to stews and soups. Barrels of marigold foliage and flower were standard at Dutch greengrocers of the day, and both were believed to stimulate the liver and sooth the digestive system. It’s because of this tonic usage that we now call them ‘pot’ marigolds.

Calendula’s power to restore and soothe damaged skin is the most popular modern usage. Try soaking your tired gardener’s feet in an infusion of marigold petals at night (see the recipe below). Or making an oil, ointment or ‘wash’ from the petals as a restorative for minor burns. In fact you can even rub petals on minor burns, in much the same way as you would use a dock leaf for nettle stings. There are plenty of recipes available on the internet, so I won’t bore you further than suggesting a simple a process for moisturiser or hand cream.

Make a strong infusion of marigold water by pouring 150 ml of boiling water over two tablespoons of marigold petals. Leave to cool slightly and then strain. Now, in a bowl set over a pan of hot water, melt together one tablespoon each of lanolin, honey, almond oil and white wax. (Experiment with the quantities until you get a consistency that pleases you – we all like different moisturisers.)

Remove from the heat and add two tablespoons of your marigold petal infusion. Whisk the mixture until thick and creamy and quite cold, then put into screw top jars (the small kind that you have saved when using other, far more expensive, beauty products!).

Brighten up salads with petals and (hopefully) improve your digestive system

If you haven’t much of a garden, try growing just a couple of plants in a trough herb garden that also contains the usual kitchen herbs – you can use the petals in salads to brighten them up and (hopefully) improve your digestive system. Or use the petals as a substitute for saffron in rice and soup.

A final thought, far from the potager, window box or any medicinal use of Calendula. In a wilder garden, try broadcasting border edges with a mix of marigold, larkspur and cornflower seed (heavy on the blues of cornflower is best). They will self-sow themselves and ‘comfort the heart’ year on year.

NOTE: Use of marigold internally – salads, teas and soups – is not advised during pregnancy (as with many herbs), nor if you suffer from a ragweed allergy.

The French potager is 'so much more than a kitchen garden'

French buy-to-let scheme is changing but 'don’t rush to invest now’
3 December 2021
More from Nature
More from Connexion
Get news, views and information from France
Join the newsletter
Subscribe to The Connexion